It's hard to miss Caitlin Simmers when she's out in the water. At 14 years old, she's already well on her way to being the next big talent to take over women's professional surfing. Progressive, powerful, with maturity and style well beyond her years, she's coming off a win at the recent Super Girl Pro and is clearly just getting started.

As you read this, she's cracked the code and is posted up at Kandui Resort in the Mentawais with fellow barrier destroyers Sierra Kerr and Bella Kenworthy. No doubt, airs are being hucked and lips are being crushed.

Simmers first gained notoriety when she represented the United States at the 2018 ISA World Surfing Games in Tahara, Japan. At 12 years old, she was by far the youngest surfer on the team. That same year she was a finalist for Sports Illustrated Kids' "SportsKid of the Year." 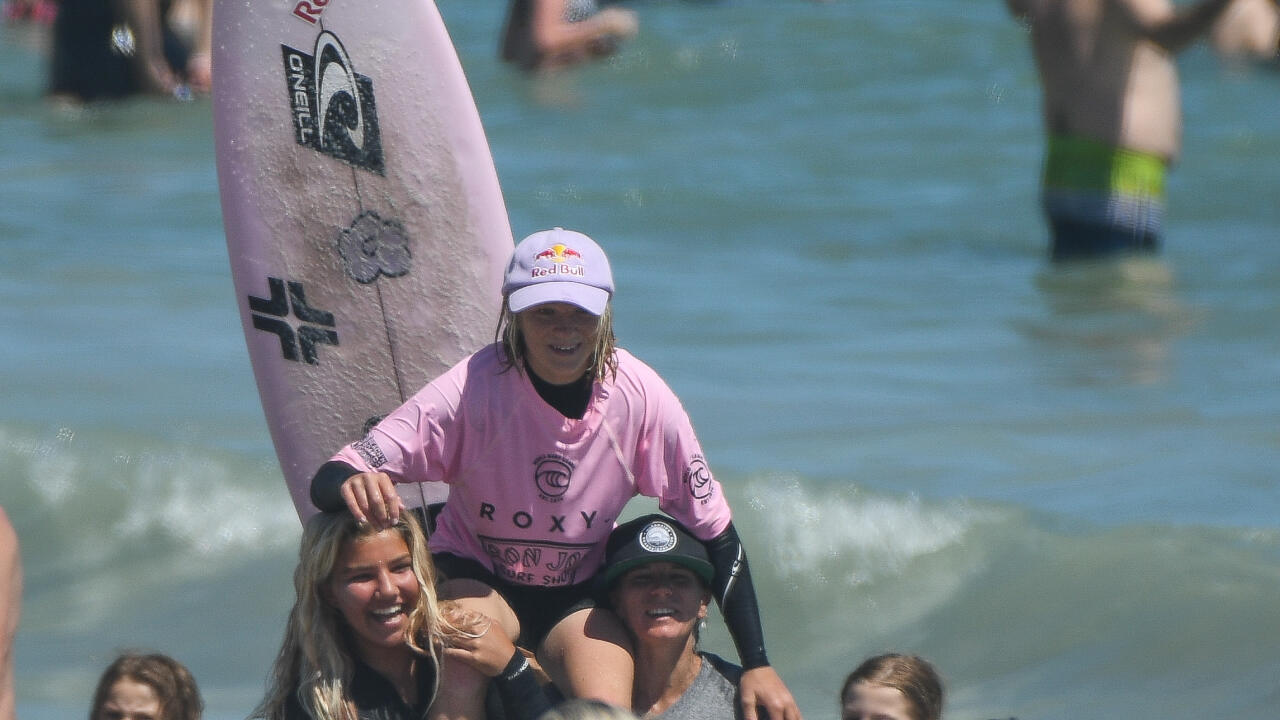 With a win at the recent Super Girl Pro, this isn't the first or last time Caity Simmers will be chaired up the beach. - WSL / John Ferguson

In 2019, Simmers took home a win Pro Junior at the Vans US Open of Surfing. And earlier this year, before the WSL season got derailed, she posted her best result in a Qualifying Series event, a fifth at the SLO CAL Open at Morro Bay.

The day before she jumped on a plane to Indo we caught up with her to talk about where she's been and where she's headed:

Who are some of your surf heroes or who do you look up to?
I really enjoy Dane Reynolds surfing, and Steph [Gilmore], and Craig Anderson too. Julian [Wilson] is pretty cool.

Those are all surfers with really good style, is that something that stands out to you?
Yeah, I think style is a big part of surfing. Maybe in contests it's not that big, but it's way funner to watch people with good style, in my opinion. Just being smooth is cool. I get kind of annoyed by people that look like they're trying too hard. That's why I like Steph, because she's smooth and just has that really classic style that's so nice to watch.

You've grown up in Oceanside, so you spend a lot of time surfing beachbreaks, but what kind of waves do you really get fired up for?
I really like getting barreled. I kind of just surf Oceanside. It barrels sometimes. It doesn't get the best barrels, but sometimes. Otherwise sometimes we go on trips, it's fun. I'm really trying to get my backhand barrels better. Even if it's closing out sometimes I'll go left just because I want to practice pulling in backside. Some people say it's easier, but I think it's way harder.

What about the rest of the year? What do you have cooking?
I'm going to Indo on Wednesday. We're going to Kandui. The Kerrs are going, Sierra and Josh, and the Kenworthys are going. I think Izzy Gomes and her brother are going. And maybe some other people, but I'm not sure.

You surf a lot with those girls, there's a whole crew of you?
Yeah. Actually, I don't surf a ton with them, but it's a lot of fun when we do get to surf together. Sierra lives pretty close to me, so sometimes I go on trips with her. And sometimes I see Bella at Lowers. That's usually where I see them.

Will this be the biggest surf trip you've ever done?
Yeah, I think so. I think it's 40 hours of travel. It's going to be so fun. I'm a little nervous, but really looking forward to it.