Earlier this winter, I made the unfortunate decision to try and duck dive an outside set at VFW's in Ocean Beach, San Francisco on an overhead-plus day. It was my first surf on a brand new 6'6", 35-liter G Money II from Doc Lausch of Surf Prescriptions and I was under the (misguided) impression that I could duck dive anything that came my way on this narrow, knifey vehicle. I was wrong. 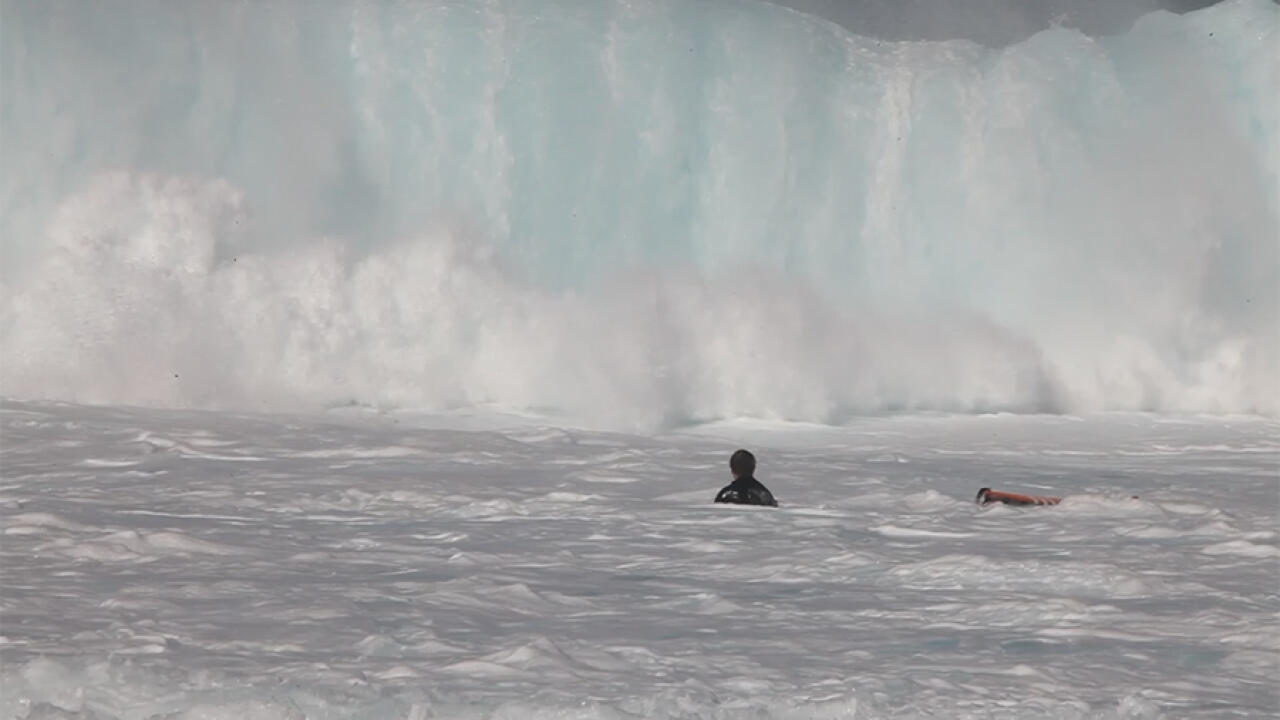 Mark Healey decided to ditch on this occasion. His Guide to Heavy Water is also a great resource for those trying to up their big wave decision making skills. - Inspire Courses/Shannon Reporting

The wave reared up in front of me and I buried my board, probably just a fraction of a second too early, and nowhere near deep enough. Instead of making it through the face, the lip landed on my back, taking me and my board for a washing machine ride. In the tumbling that followed I somehow kicked my fins and when I surfaced, not only was I bleeding profusely but I had completely wrecked the left fin box of my brand new board without catching a single wave. As I rode the whitewash in, all I could think was, "Why the hell didn't I just ditch the board?"

Winter is here. The water is cold, the swell is big, and if you've been surfing larger waves you've been doing your fair share of paddling - which brings up the ultimate question: to ditch or duck dive. A well-timed duck dive can keep you in rhythm but sometimes you have no choice and must ditch, take a few on the head, and pray your leash doesn't break. But whether or not your leash snaps, your uncontrolled board can be a danger to others and if you ditch your board on a wave everyone else ducked under, you're at the bottom of the pecking order when the next set comes through.

In the effort to gain perspective on the subject, I turned to two pro surfers who know something about big waves: Nic Von Rupp and Nate Florence. 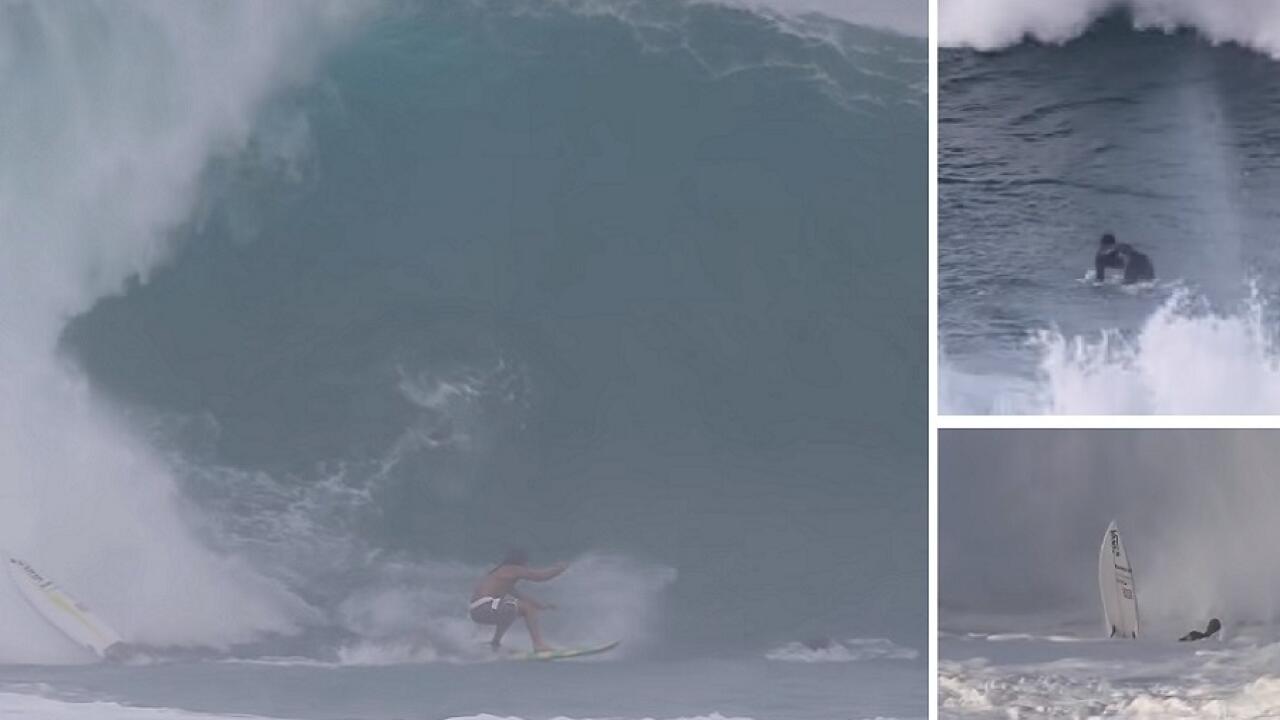 Duck diving or bailing your board? - Screenshot, Nate Florence, YouTube

From a philosophical perspective (yes, I'm a massive nerd), these decisions are fascinating. Your mind is processing so much data at once. Visual data of the approaching wave. Situational knowledge of the break, the size, the tide, the winds, where other surfers around you are, the board you're riding and more. Experience plays a huge part, too. (Either, "Yeah I can duck that," or simply, "Oh fuck, oh fuck, oh fuck.") The craziest part? This all happens in a split second and before you even realize it you've come to a decision. The mind is a beautiful thing.

Nic had a refreshing perspective on duck diving versus ditching: "Dude, I let my board go as soon as I know I'm going to cop the wave on my head," he told me. "Regardless of if it's five to six foot or 20 to 30, if you're going to get pounded you might as well let your board go. The worst part of this is snapping your leash so if I find myself even considering the bigger leash I just go with it so I know it won't snap."

As for duck diving? "You really have to know that you're going to make it," he said. "The worst thing is to try and duck dive a wave that's already breaking and have it land on you. That explodes the board out of your hands and into your face. So if you can tell you're not going to make it through the clean wall you should definitely let your board go. It has a bad connotation but it's often a good call, I do it all the time. You just let your board go and dive as deep as you can and come up on the other side. That's how you don't get pounded. Thick leash and dive deep."

Nate has some good tips for both duck diving and bailing in the video above. Coming from Hawaii where the lineups are crowded and leashes snap at Pipe all the time, he's wary of bailing - in his experience at least, it's an absolute last resort. "The risks of bailing are first a broken leash and a long swim in," he said. "Then there's the risk to other people. Also, you're not with your board so you can get pushed to the bottom and your board will start tombstoning and you're still down there getting pounded. That's one thing I don't like about bailing. Obviously some scenarios warrant a bail. When the wave apexes in front of you, if the wave is going to break on you, and if someone bails in front of you just get as deep as you can." One wave Nate won't even try to duck dive? Teahupo'o. "Do not try and duck dive back heavy slabs like Chopes," he warns.

One thing Nate mentions in the video that I'll remember is his bear-hug duck dive technique. "In big whitewashes I literally bear hug my board because the board is super buoyant and is gonna come to the surface with or without you," he said. "So if you duck dive, and then bear hug your board and turn it sideways underwater, your board will go between the whitewash boils and bring you to the surface." Advanced technique for sure, but certainly worth a shot.

Mark Healey, got even more specific on the subject in his Guide to Heavy Water: "If you're in the impact zone on a really hollow wave on a very shallow reef, it gets a little more advanced because there's a difference," he says. "If the wave breaks right in front of you and you're within eight feet of where that lip is landing, you have this very minute window, maybe a second or less when the lip hits the water as it breaks the water's surface, and a lot of that energy is deflected. The energy of that breaking lip has not penetrated the water column all the way. If a hollow wave is going to break right in front of me, I'll still try to duck dive it. And you'll get under it sometimes…So I'd almost rather have a big hollow wave at Pipe break right in front of me, because I know I have a split second to get under that. But if you're ten feet back, you're just going to get pummeled."

So making the decision to duck dive or bail, there are no absolutes. It all comes down to experience, knowing the break, knowing your equipment (including yourself and your limits) and a whole lot of variables. There's only one way to gain experience. Since my early-winter fin bashing escapade, I've spent a lot of time duck diving (and bailing) through waves and whitewash, and though it wasn't always fun and I do make the wrong decision at times, I've gotten better with that split-second choice. And after getting the fin box repaired, I've caught a couple of great waves. Bottom line: to get better at making that quick decision, you have to get out there. Go get it.