January 16th was a rewarding day of swell for Peahi-Jaws on the North Shore of Maui, Hawaii. The best big wave surfers flew in from around the world to light up the lineup with momentous rides. Here are ten images that capture the intense beauty of Super Saturday.

Landon McNamara And The Biggest Waves Of His Life

Singer, songwriter, and professional big wave surfer Landon McNamara set his eyes on Saturday's swell. "Today was such a special day for me out at Peahi. I want to thank my uncle Garrett McNamara so much for towing me in to a few" said Landon in an Instagram post that day. "For sure the biggest waves of my life today. I'm so stoked on life and feeling blessed to be home with family in one piece." 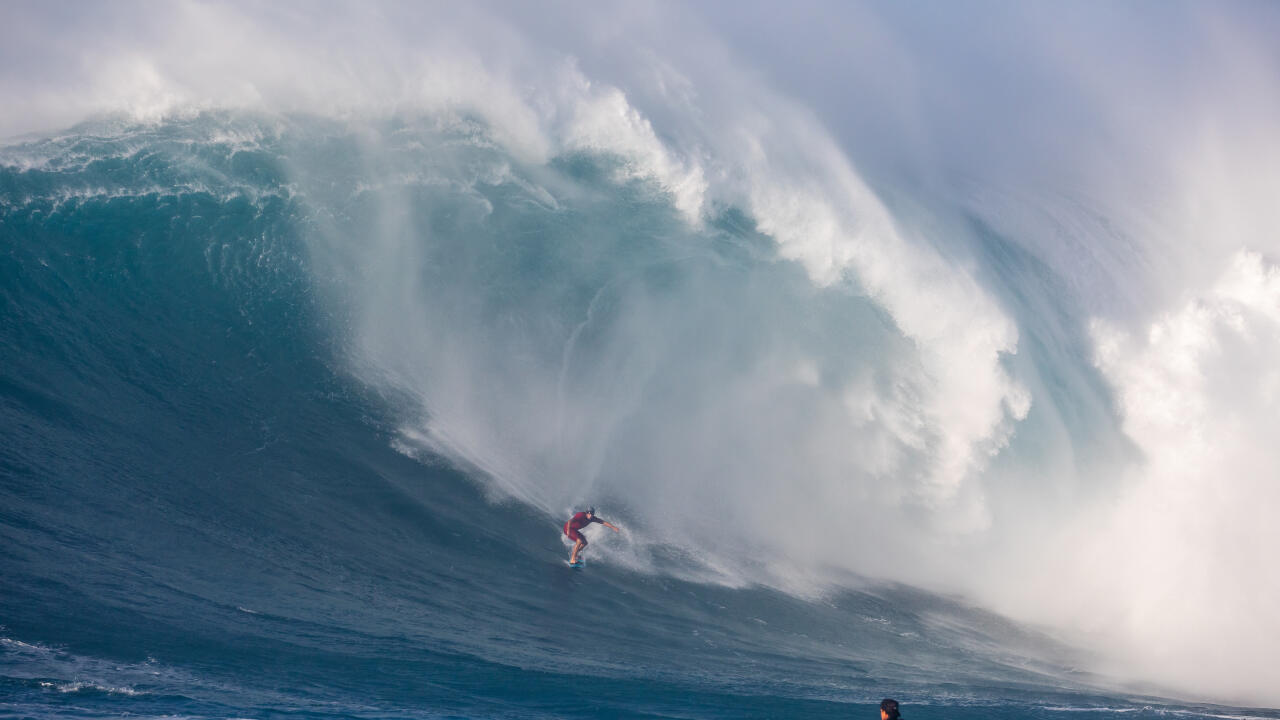 Andrea Moller, a Brazilian big wave surfer who now resides on Maui, stood out in the water this weekend at Peahi. In 2016, she paddled into a 42-foot-tall wave at Jaws, receiving a Guinness world record for her performance. This time she was towing into giants and making it look easy. Born and raised on the island of Oahu, Eli Olson recently achieved one of his biggest goals when he won the 2020 Red Bull Men's Biggest Paddle Award. Although he usually paddles into large waves, this Saturday he towed Jaws for the very first time.

In a recent Instagram post he said, "First time towing Jaws! We tried to paddle it in the morning and it didn't work out to well! Always such an amazing experience out here. Thank you Billy Kemper for giving me a couple whips!"

The wind made it hard to paddle, and while the surfers got into a few under their own power early in the day, it was more suited to towing. 33-year-old Hawaii surfer and 4x WSL Big Wave Overall Performance Nominee, Trevor Carlson, has been on a mission to ride the biggest waves in the world. And this time they happened to be close to home. David Langer originally from California moved to Portugal after falling in love with the waves and small fishing town near Nazare. Langer has had many special moments surfing the world's biggest waves, including a ride at Peahi-Jaws in 2014 described as "a single moment on a single wave [that] changed his life forever." The level of surfing at Jaws and other big wave spots simply wouldn't be where it is without these heroes. Every swell, the same faces return to the carnage and risk their own lives to bring surfers home safely. They hold the highest level of respect and honor from big wave chargers and the Maui surf community.

Albee Layer told us, "without the best safety teams in the world, surfing a day like Saturday would fall somewhere between reckless and suicidal." Italy's Francisco Porcella has had his fair share of massive wipeouts. But this past Saturday he found his journey to Maui a "blessed" experience. With the wind blowing hard and the sun shining, Francisco found his very own pot of gold: a beautiful Jaws right hander. Annie Reickert And A Feeling That Will Never Get Old

She may only be 19 years of age but, Annie Reickert is a well-rounded water woman. If she isn't riding the biggest waves in the world, she can be found foiling, SUPing, or winging around the island of Maui.

"Saturday was the day we hope for all year! It was incredible. I caught a few amazing waves - steep, hollow, fast - everything Pe'ahi has to offer" said Annie in an interview with the WSL. "Being on the water with so many friends, surrounded by that mind blowing power and beauty, was truly a gift. I love my home!" On January 16th at 11:19 am, Brad Domke broke his very own world record of the biggest wave ever ridden on a skim board. With a five pound board, no straps, and no fins, Brad was towed into a massive Peahi wave, riding it all the way to the bottom. Z Schettewi moved with his family to the island of Maui at a young age and fell in love with ocean sports. This past weekend we saw him on numerous bombs as the underground charger of the day at Peahi.