Editor's Note: Welcome to our new series, Surf History 101, where we look at innovations in the world of surfing and beyond that changed the pursuit forever. In this edition, Sam George examines the history of the wetsuit and how it changed our view of surfing.

The O'Neill Supersuit was a first-of-its-kind, fully integrated surfing wetsuit that with its waterproof zipper, sealed seams, neck, ankles and wrists was the inspiration for all modern wetsuit designs to come.

An early 1960s advertisement for Jack O'Neill's "Surf Shop" in Santa Cruz, California, featured a fetching young female model wearing a long-sleeve "spring suit" dubbed "The Thermo Surfer." The accompanying copy read, "This suit is responsible for the tremendous increase in popularity of surfing in Northern California." Big claim, especially considering that neoprene rubber wetsuits had been used by surfers for at least a decade, since South Bay surfer/diver Bev Morgan first got his hands on newly released specs of U.S. Navy dive suits in 1952. These first rubber outfits, however, were never intended for surfing, but for cold water diving, an activity that requires far less physical flexibility. This goes far to explain why surfers of the 1950s and 1960s regularly endured blue lips and slurred speech in less-than-full rubber coverage, rather than collectively embrace the thick, inflexible dive suits currently available. First came the simple vest, then the sleeveless, short-legged "short john," followed by the sleeveless, long-legged "long john." In fact, as late as 1970, prominent wetsuit manufacturers like Body Glove, Sea Suits, and even O'Neill were still marketing the "long john" as their cold water go-to, occasionally suggesting layering a pair of cropped rubber sleeves or "beaver-tail" dive jacket in extreme conditions. While a marked improvement from the past decade's bare shoulder versions worn in more temperate waters, surfers in really cold water climes (think Oregon, Rhode Island or Easkey) had no alternative but to fight their way in and out of thick, stiff dive wetsuits while dreaming of affordable airline tickets. Then came the July, 1970, issue of SURFER magazine, featuring a decidedly enigmatic advertisement by O'Neill, introducing a wetsuit they called "The Supersuit." Enigmatic, as the ad included only a partial image of said suit, reserving its salient pitch for the copy:

"Supersuit is a dry/wet suit sealed at the arms and legs and neck with the zipper on the back," read the ad. "On a board with a Supersuit you can surf in Alaska."

What a concept. But surfers had to wait a couple months for the next issue of the magazine to actually see what this new super suit looked like. This latest O'Neill ad depicted company founder Jack O'Neill standing on the beach with his sons Mike and Pat, both wearing traditional "long johns." Their old man, however, wore what appeared to be some sort of space suit. One-piece, fully-integrated neoprene coverage, taped seams, tight cuffs, attached hood with a waterproof zipper placed horizontally across the back shoulders - this was like no surfing wetsuit ever seen at the time. Granted, this thing was burley, constructed from 4mm Rubatex neoprene and with its sealed zipper, cuffs and hood would later be considered almost too warm for most winter surfing conditions. But that, apparently, was the whole point of the Supersuit: designing an extremely warm, flexible wetsuit for a whole world of surfing not yet imagined. 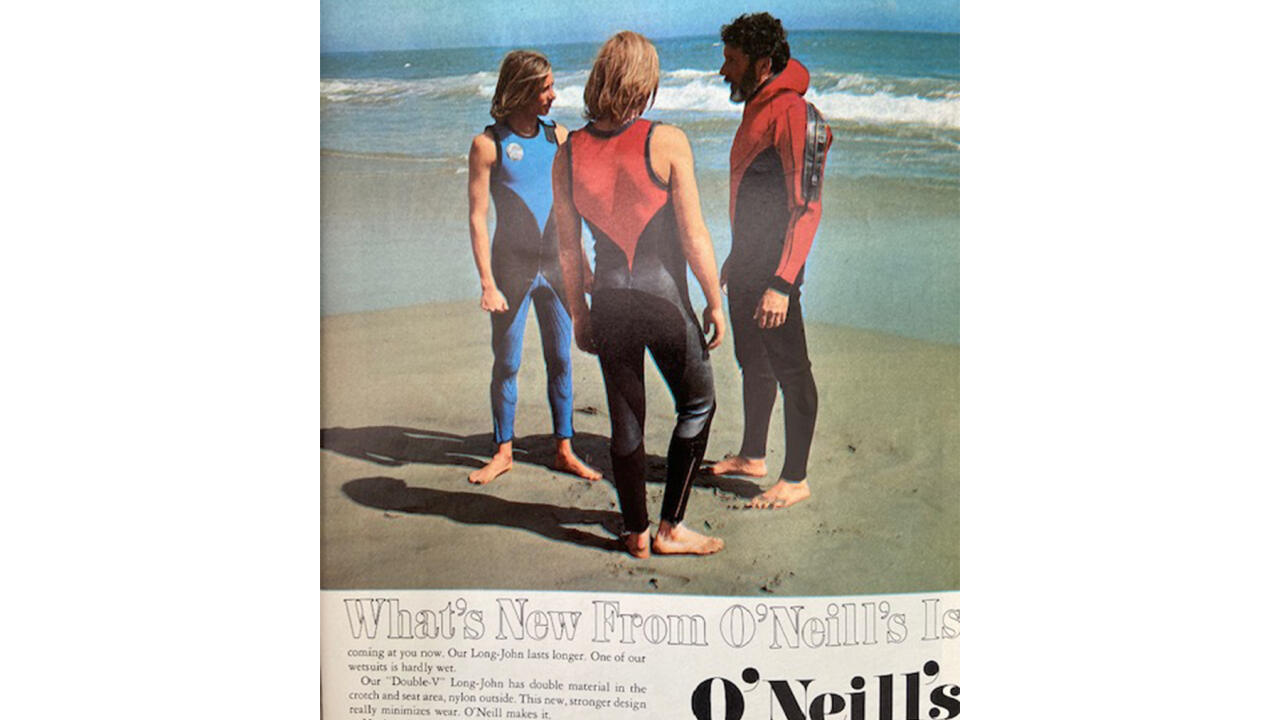 What Has It Meant to Surfing?

Humans have been riding waves on boards for centuries; no modern innovation has had a greater impact on the global sport than the wetsuit. Advances in insulation literally redrew our maps, adding at least 80 new lines of latitude, north and south, introducing and then reinforcing the idea that virtually the entire globe is surfable during all four seasons. The Supersuit was the quantum leap that made this possible. Okay, like a lot of prototypes it wasn't a huge seller. But the O'Neill Animal Skin, which hit the market just a few years later, and with its horizontal back- zip, taped seams and sealed "O" neck was basically a scaled-down version of the Supersuit, eventually became almost ubiquitous in numb toes zones around the world. Over the decades myriad innovations in wetsuit technology and design would follow: multi-density construction, heat-sealed seams, water-tight back and chest zippers, lighter, more flexible rubber, all of it aimed at the single goal of allowing surfers to spend more time in water temps no one in their right mind would want to spend any time in. Like, for example, in Alaska - probably the most outlandish place on earth the O'Neill folks could think of when first advertising the Supersuit in 1970. And we all know how that turned out. Just ask Chris Burkard.

Editor's Note: For a collection of longer reads by Sam George go to SamGeorgeWorld.substack.com