The World Surf League today announces the 2022 Championship Tour (CT) and Challenger Series (CS) calendars, the inaugural season for the fully redesigned Tours and Competition framework, establishing the key venues and dates for the world's best surfers moving forward. The all new format features a combined men's and women's schedule for the first time, as well as the introduction of a mid-season cut, a new defining moment for professional surfing.

The WSL will have a three-tier competition framework that emphasizes developing young talent more locally via the seven Regional Qualifying Series, on which emerging men's and women's surfers will battle to earn a spot on the newly-formed global Challenger Series. Once on the CS, they will have the opportunity to qualify for elite CT where the best surfers on the planet compete for the undisputed World Title.

The 2022 WSL CT will include 10 regular-season events in seven countries, starting in January at the world-famous Pipeline in Hawai'i, for the first-ever men's and women's joint event at that legendary break. The CT will return to G-Land, Indonesia, which is back on the CT for the first time in 24 years for the men and for the first time ever for the women, and conclude in August at the infamous Teahupo'o in Tahiti before the second-annual Rip Curl WSL Finals in September, where the WSL Final 5 men's and women's surfers will face off for the undisputed World Title.

"The WSL exists to steward and celebrate the world's best surfing and this redesigned Tours and Competition framework is historic in many ways, serving as the core engine of our business," said WSL CEO Erik Logan. "In collaborating with our surfers and partners on delivering events like the Billabong Pro Pipeline, the MEO Portugal Pro, the Rip Curl Pro Bells Beach, the Quiksilver Pro G-Land, the Oi Rio Pro, the Margaret River Pro and others, we're thrilled to announce one of the most exciting WSL Championship Tour calendars in history for next season and set the framework for the sport for years to come." 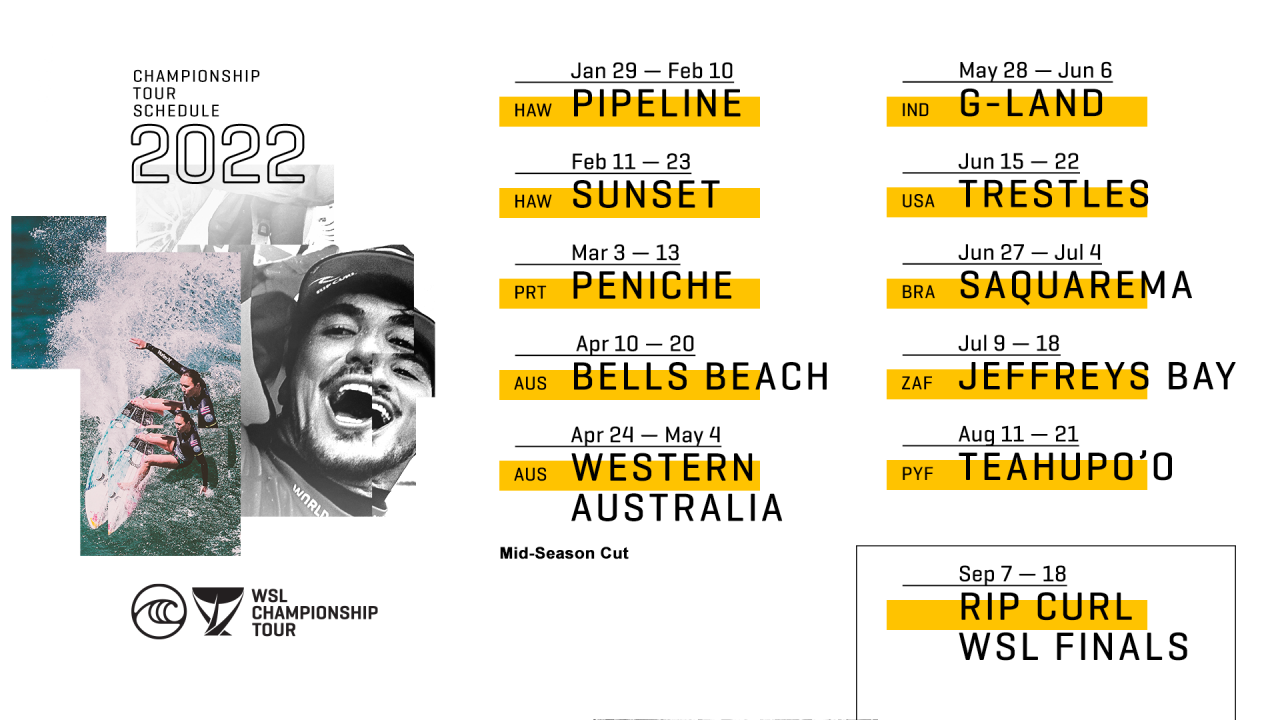 "Next year's combined CT schedule starts at the Billabong Pro Pipeline and concludes in Tahiti and adds back incredible venues like G-Land and Jeffreys Bay," Logan continued. "Surf Ranch has been featured on the CT calendar since 2018 and we'll be taking a year off from the basin in 2022. We will continue to innovate with the world's best artificial wave technology and we are excited for a return to our wave system in 2023 and beyond."

The 2022 CT season will start with 36 men and 18 women, and then be reduced to 22 men and 10 women after the mid-season cut. The top-ranked surfers will continue on to the second half of the tour (where they will be joined by two men's and two women's wildcards) and automatically requalify for the 2023 CT. The smaller fields in the back half of the year will create more compact and exciting events, with only the best conditions in the event window, and more matchups featuring the biggest stars on tour. The surfers who miss the cut will be relegated to the CS, which commences immediately following CT stop five in Western Australia, where they will have the opportunity to earn back their slot on the following year's CT.

"We believe we have arrived at a structure for our tours that makes great sense and is a massive upgrade for fans, partners and athletes throughout the pro surfing ecosystem," said Jessi Miley-Dyer, SVP of Tours and Head of Competition. "It's awesome that both the Championship Tour and Challenger Series will have a fully combined men's and women's schedule, as well as an equal number of events, for the first time in 2022. We've been really deliberate in working with our stakeholders to build calendars that are driving the world's best surfing, have great venues and create the best possible platform moving forward. We've had overwhelming feedback from our surfers and partners in the development of the eight-stop WSL Challenger Series, including incredible events like the Vans US Open of Surfing and the Quiksilver and ROXY Pro France. We couldn't be more excited about 2022 and beyond." 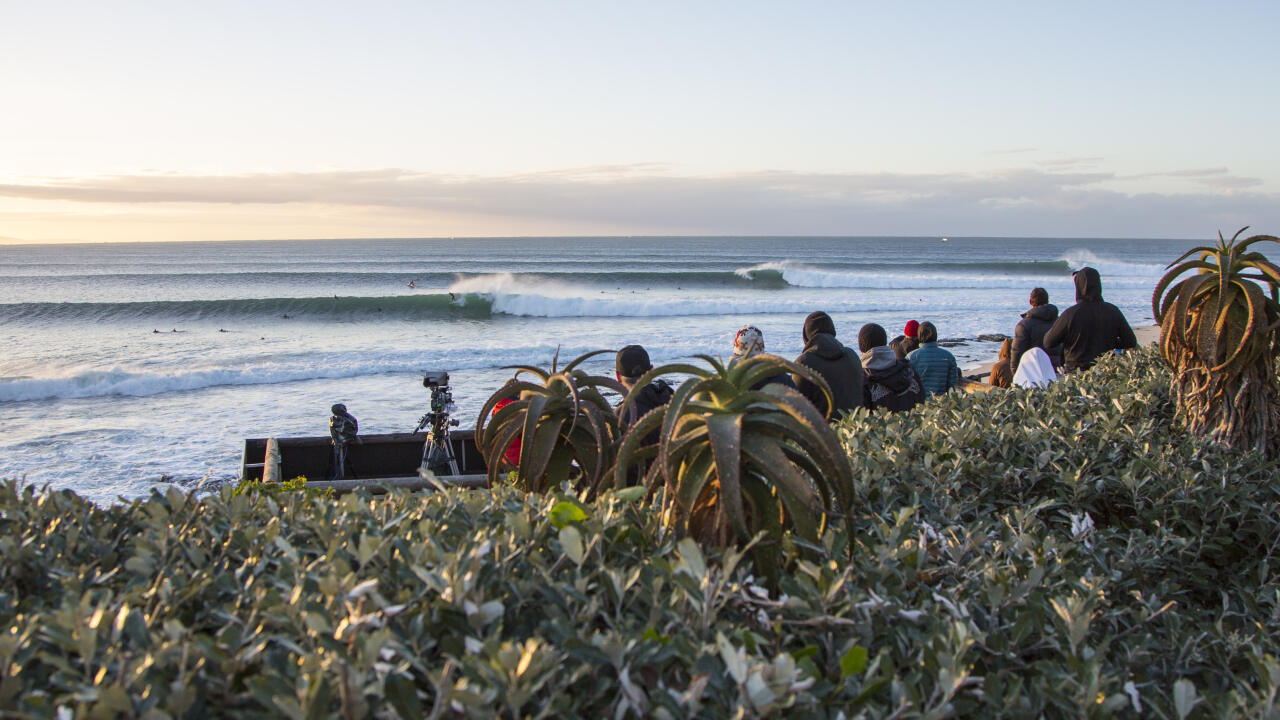 One of the best right-hand pointbreaks in the world, Jeffreys Bay, South Africa, will be back on the Championship Tour schedule in 2022. - WSL / Pierre Tostee

"With the new mid-season cut, every event counts," said WSL Surfers Representative, Conner Coffin. "The fact that someone could lose their place on tour after five events really ups the stakes and is going to push everyone to surf really hard."

"It's amazing to be part of such an incredible moment for women's surfing," said WSL Surfers Representative, Tatiana Weston-Webb. "2022 will be remembered as the first year we'll have a combined tour for men's and women's, including an equal number of events. I'm very excited to surf the best waves in the world, and make history together with all of the CT surfers."

The second of three competitive tiers for the world's best surfers, the 2022 WSL Challenger Series will feature 96-man and 64-woman fields, drawn from the seven WSL Regional Qualifying Series around the world. CS surfers will compete for a chance to advance to the elite WSL CT in 2023, with surfers counting their best five of eight results on the Challenger Series in hopes of finishing in the Top 10 men's and Top 5 women's spots by the end of the season.

The 2022 WSL CS will consist of eight events, beginning at Snapper Rocks on Australia's Gold Coast, Australia from May 7 - 15 and concluding in Haleiwa, Hawai'i, from November 26 - December 7.

Snapper Rocks has served as the opening CT event since 1998 and with the two Australian CT events in 2022, the famed righthand point will host an international field in the high-quality surf month of May, igniting the WSL CS schedule each season moving forward. 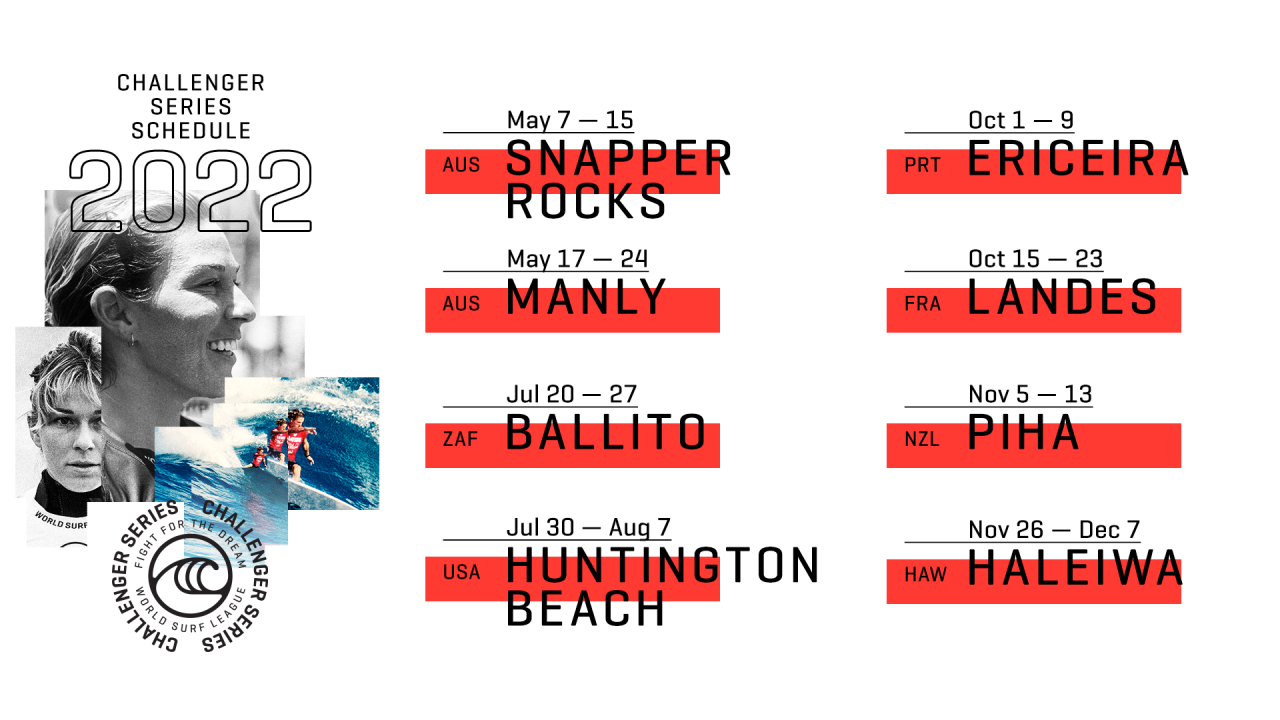 The critical foundation to the WSL's new three-tier competition framework, the Regional Qualifying Series enables young surfers to develop close to home, without the expense and burden of global travel, before competing internationally on the global CS and eventually, for those who perform, the elite CT.

"The regionalized Qualifying Series provides more opportunities to celebrate local stars and reduce the economic pressure for surfers as they work towards qualifying for the Challenger Series, and ultimately the CT," said Logan.

The seven Regional Qualifying Series (QS) are: Africa, Asia, Australia/Oceania, Europe, Hawaii, North America and South America, qualifying men's and women's surfers from each region to the CS and an opportunity to earn a place amongst the world's best on the CT. More information on the QS schedule to follow.

*All tour stops and dates are subject to change due to applicable COVID-19 related restrictions, including global travel restrictions.

The health and safety of athletes, staff, and the local community are of the utmost importance and the WSL has a robust set of procedures in place to keep everyone safe. These plans are unique to each Tour stop.