With beautiful sunny skies, six-to-eight-foot surf, and clean conditions, Tuesday September 14, 2021, was the perfect day to crown the men's and women's World Champions. The inaugural Rip Curl WSL Finals took place at Lowers Trestles in San Clemente, California, with a new single-day format and plenty of waves to go around.

The top five men and women from the Championship Tour battled it out in a series of Matches throughout the day, proving that it takes grit, stamina and unworldly commitment, on top of talent, to be crowned a World Champion. In the end, the day saw Carissa Moore capture her third World Title and Gabriel Medina earn his third.

From the hardworking WSL photo department, these are the moments that made history at the inaugural Rip Curl WSL Finals:

Top seeds and World No. 1 ranked surfers going into the Rip Curl WSL Finals, Moore and Medina dominated the event enroute to securing their World Titles in an epic battle against their rivals. After highly successful seasons on the Championship Tour, and for Moore, a gold medal in surfing's Olympic debut, they were able to make the most of the new, innovative Finals format and maintain their positions as the best surfers in the world. The Passion And Purpose Of A World Champion

After having 2020 to take a step back and breathe, Moore went all in on her pursuit of a fifth World Title. Her 2021 CT campaign was marked by her consistency as she never placed lower than a Semifinal finish all year. The hard work payed off and now the Hawaiian has another World Title trophy to add to her collection -- and she's only two away from Layne Beachley and Stephanie Gilmore's record of seven Titles. "I feel so happy. It is not everyday you accomplish your dream. It feels so good to dream. Every dream seems to be impossible until it is done. This is a special day for me," shared Medina in an interview after winning. "I had this dream in my mind for a long time. All the glory and honor to the guy up there. Always make me never give up and work hard. There is no other way you can go, working hard and having patience." After winning his third World Title, Gabriel Medina stands on the back of the jetski, claiming his win infront of the crowd at Lowers Trestles. - WSL / Pat Nolan

The Dedicated Fans And Epic Waves

The Southern California sun was shining and the waves were all-time out at Lower Trestles for the event. Dedicated fans crowded the beach to watch history in the making: The first-ever Rip Curl WSL Finals, it was also the first World Title event in any sport where a man and a woman were crowned on the same day, in the same conditions, at the same venue, with the same amount of competitors. The crowd of dedicated fans flocked down to Lowers Trestles in San Clemente, California, to watch the worlds best surfers compete for the 2021 World Title. - WSL / Pat Nolan

The Larger Than Life Surfing

With three of the five Rip Curl WSL Final surfers being Brazilian on the men's side, the amount of high-flying aerial maneuvers kept the fans entertained all day long. It also showed the footprint of the Brazilian Storm and its dominance on the Tour in recent years.

In the final showdown between Medina and Filipe Toledo, they pushed each other above the lip in each consecutive Match. And when it comes to the newly minted three-time Champ, he doesn't hold back at all. Whether it is a right or a left, he put on a spectacular show for the crowd on the beach and, more importantly, in the judging tower. 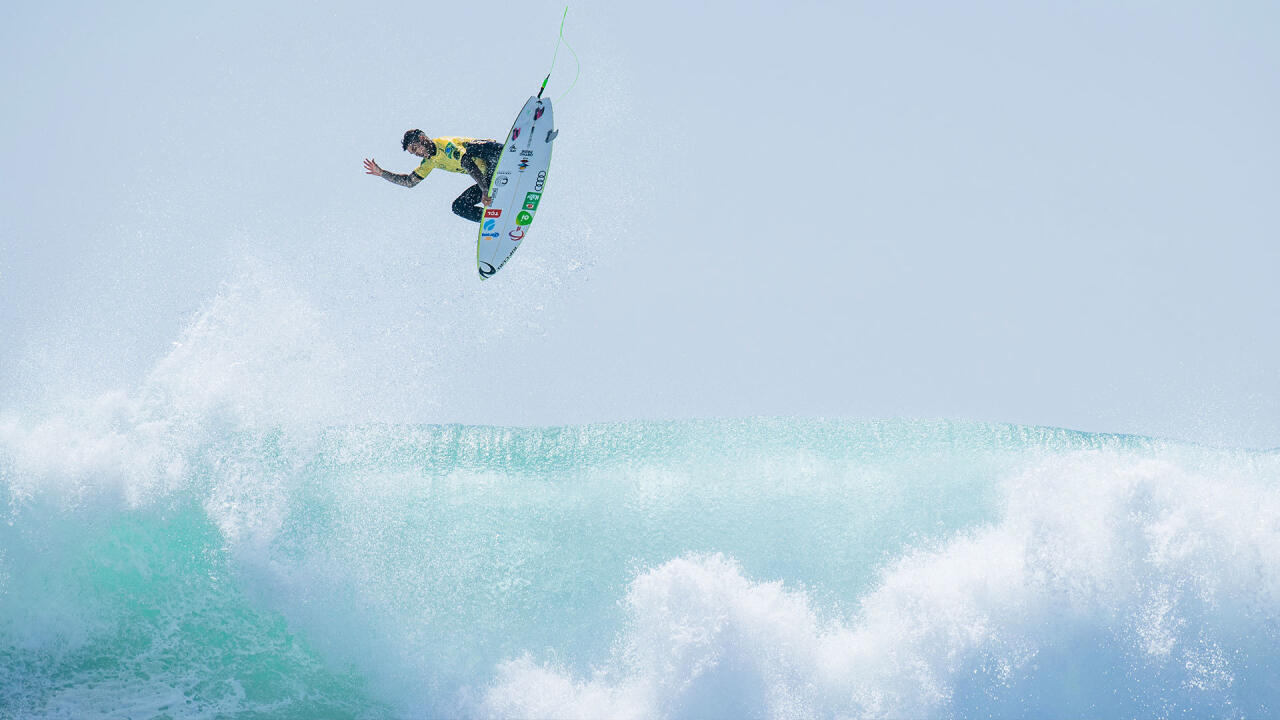 Whether it is barrel riding, aerial meanuevers or turns, Medina can do it all. - WSL

The Back To Back Heats

World Number 3. Sally Fitzgibbons lays down for a rest in between heats after beating Johanne Defay in Match Two. She only had a few minutes to recover before paddling out to face Tatiana Weston-Webb in Match Three. The new Finals format pushed surfers to perform at their highest level, especially if they as they got closer to the World Title Match. Sally Fitzgibbons lays on the floor of the locker room in between heats to catch her breath and lower her heart rate before paddling back out. - WSL / Thiago Diz

An Unexpected World Title Match Up

Toledo made is way past world No. 2 Italo Ferreira in their Match to face off against World No. 1 Medina. Illustrating his comfort at Lowers after moving to San Clemente with his family years ago, he knew exactly where to sit in the lineup, the right waves to take-off on and how to surf his way through to the Final. The Fight Until The Very End

"It was a long year, it was a long day. It was not how I imagined it would start. And I kinda had to fight my way back. I think it made it feel even sweeter to win that way" said Carissa afterwards. "I was about to have a meltdown after losing that first heat. I wanted it to be over sooner rather than later. Having to regroup a bit, let go and surf from my heart. I am happy it worked out." Rail to rail, Moore and Weston-Webb paddle for the same wave in heat two of the Title Match. - WSL / Tony Heff