Powerful, smooth, and fluid. That's how to describe the surfing of Carissa Moore. The smiling assassin has just completed one of the winningest years in professional surfing with two event wins, and an Olympic Gold medal to go with her fifth World Title.

Throughout Moore's career, she has proved to be the best surfer in the world. Her win at Lowers and fifth World Title edge her closer to Australians Layne Beachley and rival Stephanie Gilmore and their record seven world titles. At 29 years old, the Hawaiian is still young and has plenty of time to increase her vice grip on the sport.

Moore burst onto the scene as a 12-year-old and was predicted to change the face of surfing. And she certainly did, winning her first World Title at 18, and by the age of 24 in 2015, had claimed another two. In that time she brought new levels of professionalism, progression, and power to women's surfing. 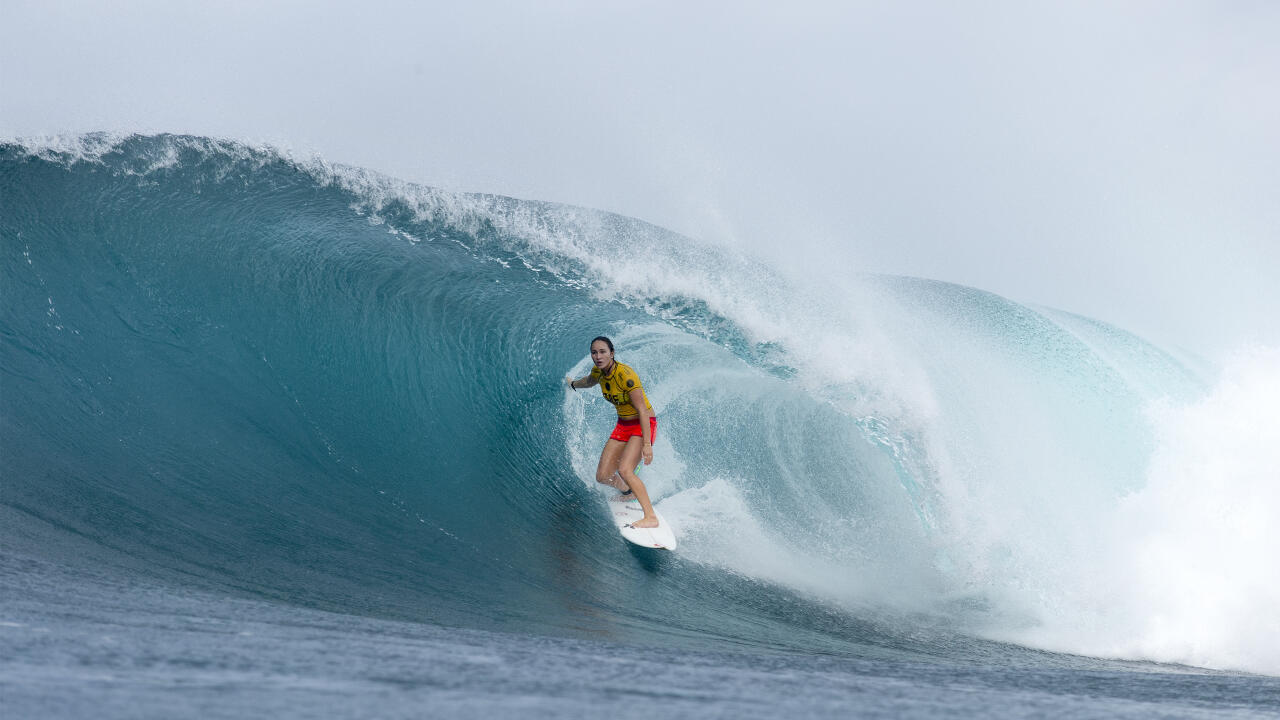 However, after her third World Title she was faced with the rise of Tyler Wright and re-emergence of Stephanie Gilmore who both clawed back World Titles of their own. It appeared that a degree of vulnerability crept into Moore's surfing and the non-stop pressure of competition was taking its toll.

"The journey can be discouraging, and there have been times when I wanted to give up," said Moore in an interview with her sponsor Red Bull in 2018.

She bounced back though, finishing the 2018 season ranked No. 3 in the world, and in 2019 won her fourth World Title in Maui after victories in France and J-Bay.

"I dreamed of this moment for a really long time," said Moore after the victory. "Each world title has been a little different and this one was definitely the hardest."

Moore started the 2021 season with the first women's event at Pipeline. Despite losing in the Final to a fired-up and in-form Tyler Wright, she won the first Vans Digital Triple Crown with her performances at Sunset and Haleiwa, and packed tubes at Pipeline and Backdoor. She steadied the ship as soon as she landed in Australia. In Newcastle, Moore nailed what was considered the best air ever completed by a woman in a professional heat. The air, and demolition performance, thrust her onto the podium and back in her favourite yellow jersey.

The defending world champ didn't drop below a third-place finish for the rest of the season. In any other Championship Tour season, this would have seen her easily win the World Title on aggregated points.

However, the change to the World Title going down in a one-day showdown set up a three-heat battle with Brazil's Tatiana Weston-Webb that pushed the Hawaiian to her devastating best in pumping 4-6 foot Trestles. After a nervous start, losing the first heat of their three-heat clash, Moore regrouped and found the form that we're accustomed to seeing throughout her career.

As she was chaired up the beach by long-time Hurley team manager Brandon Guilmette and coach Mitchell Ross, the smile couldn't be wiped from her face. Her team also includes her husband Luke, her Dad and long-time shaper Matt Biolos, who has helped fine-tune her competitive quiver. "It's a bit emotional it was a long year -- it was a long day. It wasn't how I imagined it would start and I had to fight my way back so I think it made it even sweeter to win that one," said Moore after the final.    "I've never been in the water when winning a world title, so this is extra special. I couldn't ask for anything more!"

Prior to 2021 Moore got to enjoy a well-deserved break from competition with the postponement of the 2020 season. Let's not forget she won eleven national titles during her amateur career before she jumped on the World Championship Tour.

As women's professional surfing continues to head into uncharted territory with performance barriers smashed at every event in the air and in waves of consequence, Moore has always found a way to stay ahead of the curve. The Hawaiian winter is just around the corner and with Pipeline added as the first stop for the 2022 season, rest assured Moore will be looking to master Pipe and Backdoor with the help of Pipe legend Jamie O'Brien.

With France set to host the 2024 Olympics and Teahupoo confirmed as the surfing venue for the Paris Games we can expect Moore will once again be billed as a favorite to push the envelope at one of the world's most dangerous waves.

How many world titles she has by then is anyone's guess. But as far as her form goes, the sky's the limit.