2021 was a year like no other for 29-year-old Carissa Moore. Not only did Moore win her fifth World Title but, she added to her long list of accomplishments with a Olympic Gold Medal. To be specific, the first Gold Medal to ever be awarded in the sport of surfing.

Carissa comes from a long line of women before her. In her ongoing legacy, she has paved the way for future generations to reach new heights and continue progress the sport. One of her additional outstanding accomplishments, was her successful landing of the highest aerial maneuver by a woman in competition during the 2021 season.

Here are the best photos snagged by the WSL Photo Department, capturing the defining moments of Carissa Moore's whirlwind year finishing with her win at the Rip Curl WSL Finals at Lowers Trestles.

Rainbows For Riss Throughout The Year

Rainbows seemed to be a mascot for the World Champ all season long. During her first heat of the 2021 Championship Tour season, a rainbow appeared above the Hawaiian at the Maui Pro presented by ROXY at Pipeline.

Another rainbow was seen during the Finals of the Olympics when she won surfing's first Gold Medal. In Hawaiian culture, the rainbow is a symbol of a pathway of the divine. Hawaii is where surfing began as the sport of kings and queens. In her own right, Carissa carries on a legacy of those who came before her, including Duke Kahanamoku, the father of modern surfing, who advocated for surfings inclusion into the Olympics 100 years before her time. Then-four-time WSL Champion Carissa Moore of Hawaii winning Heat 3 of Round 1 of the Maui Pro presented by ROXY at Honolua Bay on December 7, 2020 in Kapalua, Hawaii. - WSL / Dayanidhi Das

The Champion Of The People

After moving the first event from Honolua Bay to Pipeline, Carissa had to switch gears and quick. Her mindset needed to adjust from a friendly right hand point break to one of the most dangerous and complicated waves on the planet. There is no doubt that when it came to barrel riding at Pipeline, Carissa Moore was the champion of the day, even if she placed runner up to Australia's Tyler Wright.

A World Champion can be defined as someone who is well rounded in all areas of their surfing. From barrel riding to turns to aerial maneuvers. This year we got to see Carissa shine in all aspects and curate her surfing to each specific break. Moore charges into a huge barreling wave at Pipeline, on the North Shore of Oahu during the first event of the season - WSL / Brent Bielmann

Back Into The Yellow Jersey

With a second place at the Maui Pro presented by ROXY at Pipeline and a win at the Rip Curl Newcastle Cup presented by Corona, Moore regained the coveted Yellow Jersey.

Her tenacious and quick-witted surfing in Newcastle showed the judges exactly what they were looking for, giving her the upper hand against Australia's Isabella Nichols in the finals where she scored a 9.50 on a single wave.

"Oh my gosh it feels amazing, I don't know what I expected coming into this event but I was just taking it heat by heat and it feels so good to be standing number one a the end of this contest," Moore said after winning. Her result in Newcastle built up her confidence and momentum going into the remaining three stops of the Australia leg. One of her biggest accomplishments this year occured during the Quarterfinals of the Rip Curl Newcastle Cup presented by Corona. In her heat against France's Johanne Defay, she took to the sky with the largest air successfully landed in women's competition, sending the crowd into a frenzy.

It was such a big moment for the sport that even her fellow competitors took the time to celebrate what it meant for women's surfing. Carissa Moore proved she is more than capable of mixing it up with a new wave of progressive surfers coming for the Championship Tour. - WSL / Cait Miers

Wearing the Yellow Jersey heading into the Rip Curl Narrabeen Classic presented by Corona, Carissa leaned on her powerful backhand surfing, letting the fins hang out the back of the classic lefts on offer at the venue. Carissa grew up surfing the South Shore of Oahu where lefts are plentiful. She looked sharp throughout her heat but in the end it was a close loss in the Semifinals to Brazil's Tatiana Weston-Webb. Showcasing her beautiful backhand, Carissa Moore hits the lip and lets the fins hang out the back of the wave during her Quarterfinal heat. - WSL / Cait Miers

When it comes to the Surf Ranch, Carissa has always been a front runner. Her style, turns, and barrel riding shows her ability to be versatile on the perfect man made wave.

During the finals of the Jeep Surf Ranch Pro presented by Adobe against Johanne Defay, Carissa came up just short of the win not being able to top the 8.70 left hand ride by her fellow competitor. This second place finish fired her up for the last stop of the season at the Corona Open Mexico presented by Quiksilver before the Rip Curl WSL Finals. They say it takes a village, and that is no lie. Carissa Moore brings along a strong team of supporters to each stop, one of them being her loving husband Luke and her father Chris. In fact, with her steady support system she never placed below a Semifinal finish the entire season. Her consistent performances at every venue shows her ability to surf all types of waves in all conditions. 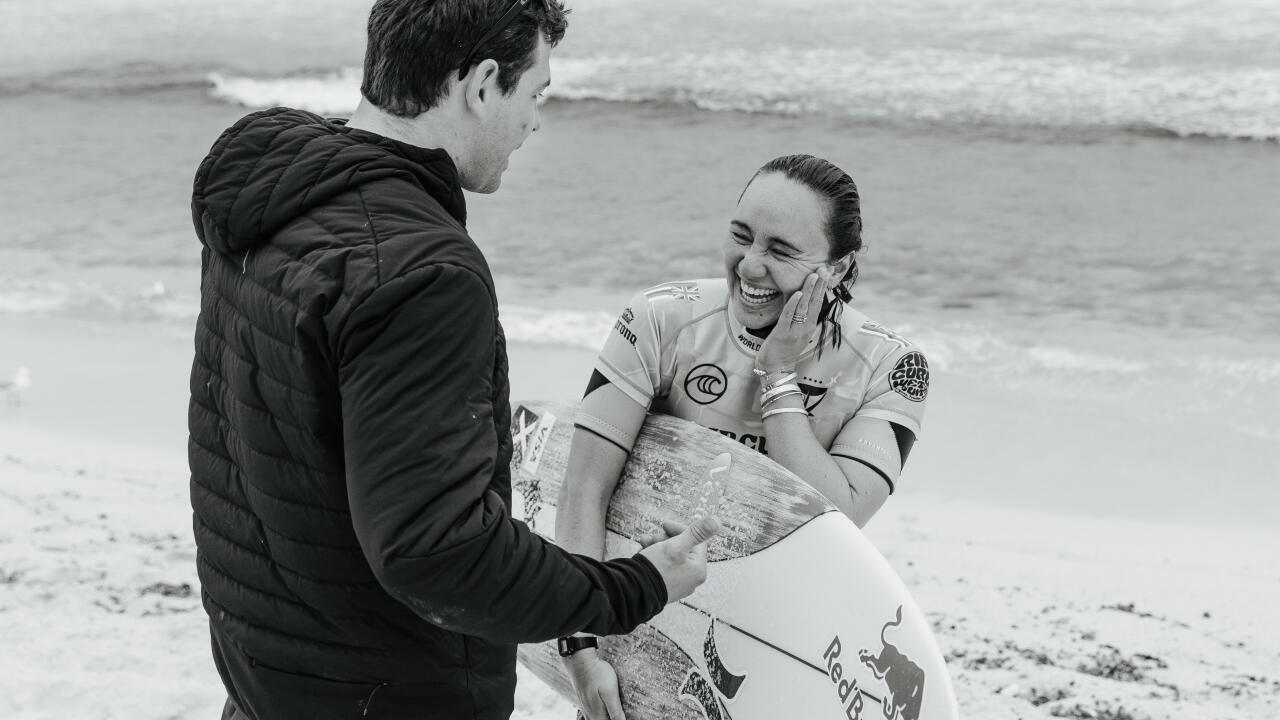 Carissa and her husband Luke smiling after coming in from a successful heat during the Rip Curl WSL Finals. - WSL / Matt Dunbar

Moore came up against tough competitor Tatiana Weston-Webb in the final showdown of the Rip Curl WSL Finals. It came down to the best of three heats as the women competed for the chance to claim the coveted World Title trophy. After having suffered a loss in the first heat of the showdown, Carissa had to change her mindset, resetting her approach. And she did just that, taking it home for Hawaii once again.

"It's a bit emotional. It was a long year, it was a long day" said Moore in her post heat interview.

"It was not how I imagined it would start. And I kinda had to fight my way back. I think it made it feel even sweeter to win that way. I was about to have a meltdown after the first heat and losing that one. I wanted it to be over sooner rather than later. Having to regroup a bit, let go and surf from my heart and try my best. I am happy it worked out. I don't think I could have asked for anything more or written it any better." Moore will go down as one of the most dominant surfers in the history of the sport and she's only getting started. - WSL / Pat Nolan