The report came it at first light: "It's huge and clean."

After a turbulent, wind-whipped opening day, the Atlantic sorted itself out overnight as all the elements came together for a massive day of surfing at Nazare.

About four hours after receiving the initial report another message came over the wire: "Word on the beach, Chumbo's wave was one of the biggest ever…"

Highlights: Nazare Kicks Off 2022 With Huge North Atlantic Swell
3:56
On a day filled with heart-pumping surf and momentous rides, Chumbo scores the wave of the day.

Spot judgment from the beach is always dicey when the adrenaline's flowing and one's in the heat of the moment, but as video of the wave came through it was clear, Lucas Chianca had clearly just done something special. Filmed from the bluff, the scale of Chumbo next to the giant wall of water is absurd. It doesn't look real. But somehow, going a million miles an hour, he holds his line and pulls it off.

In terms of "biggest ever," where the wave eventually lands in will be analyzed and discussed for months to come, but for now, Chumbo can rest easy knowing that he's potentially got a date with the record books. 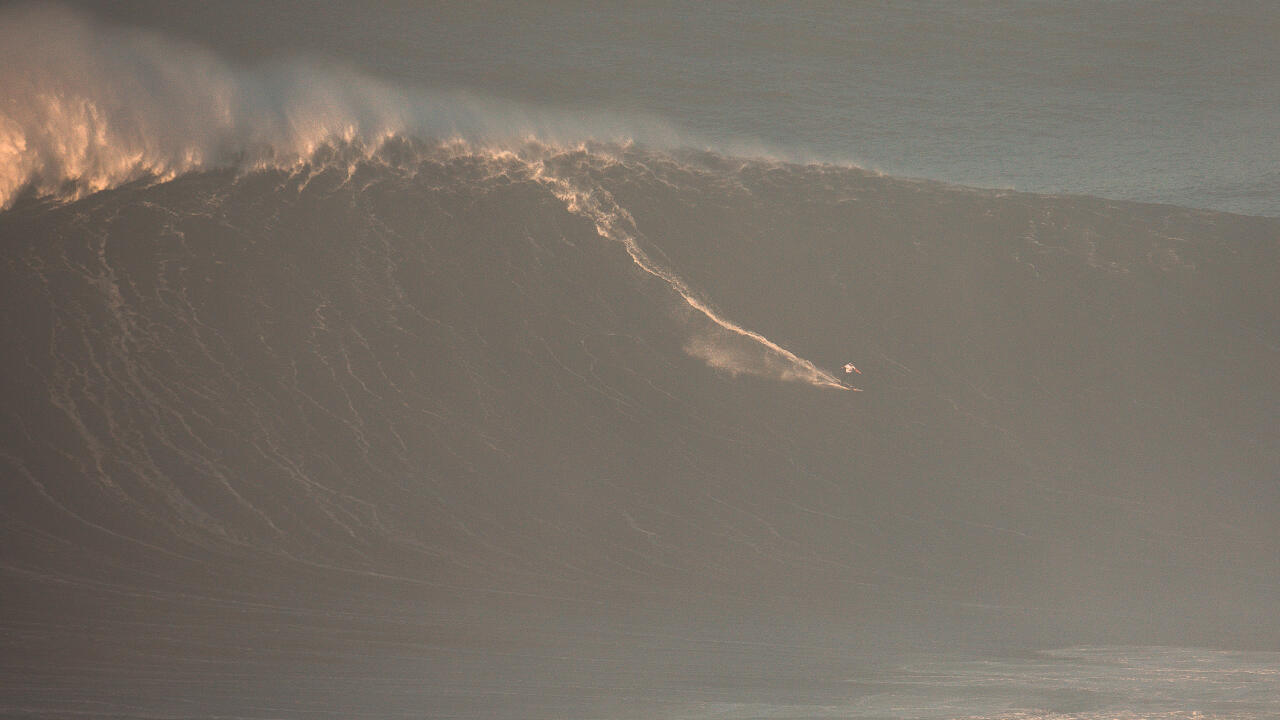 With an open face ahead of her and a giant peak bearing down behind her, Justine Dupont charges one of the bigger waves of the day. - WSL / Miguel Sacramento

Of course, there were others out there risking life and limb in the conditions that can only be described as epic. Justine Dupont wrangled a beast on her backhand. Handling the bumps and chop like the boss that she is, for as challenging as a day like this at Nazare is, doing it on the backhand seems so much harder. With her back to the wave, she gets the job done purely on instinct and feel. It's amazing.

And, of course, right there with Dupont is Maya Gabeira. Streaking across a big set wave on her florescent green board, her experience and bravery at Nazare was on full display as she got clipped at the end of her ride and copped the the Atlantic on her head. In a testament to how good the ski drivers and water safety teams are, both Gabeira and Dupont were plucked from a couple potentially very dangerous situations.

And while we're on the subject of danger, the UK's Andrew Cotton opted to go left today. Decidedly more dangerous than going right, bad things can happen quickly if one doesn't make a clean exit. But Cotty's a veteran out there and made it look way too easy.

There's still plenty of swell out there, and conditions providing, it'll be back on again tomorrow. Keep it locked right here as more action unfolds off the Portuguese coast. 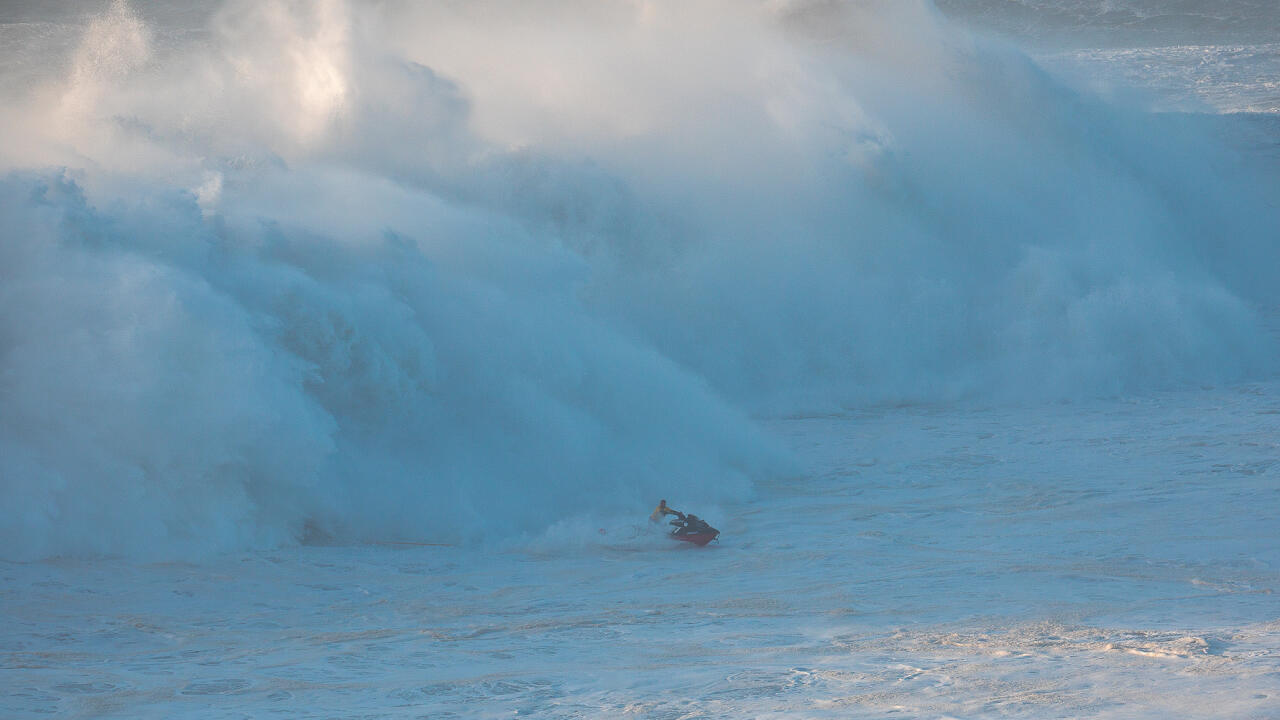 The dawn of a new swell is always greeted with nervous, fidgety anxiety. Did the swell fill in? What's the wind doing? Is there anyone out already?

For elite big-wave riders, the list of questions is seemingly endless as every detail gets triple checked. From inflation vests and extra CO2 cartridges to straps on the tow boards and safety radios, to enjoy any modicum of safety in truly massive conditions requires an attention to detail that borders on an obsessive compulsive disorder.

Such was the scene at Nazare this morning as the first large North Atlantic swell of 2022 hammered the Portuguese coast. Greeted by strong winds, frontrunners of the new swell showed early in the morning.

Highlights: North Atlantic Kicks Off New Year With Wild Day At Nazare
2:30
With the swell building all day, and some very challenging conditions, a handful of elite big-wave chargers were up to the challenge.

"There's a lot of expectations," told France's Eric Rebiere. "I think this afternoon could be one of the biggest -- I hope so. I'm a little worried the swell will hit at night and not in the afternoon, but we'll see. We'll be in the water and wait for the bigger ones."

"The season's just starting now," he added with a chuckle.

"It is pretty big out there already, pretty stormy too -- savage conditions, but we love this." described Lucas Chianca. "I think the next few days will be really big. If they don't run Jaws on the next swell, I think we could stay and get some really good waves here."

Among those getting in on the day's action was the UK's Andrew Cotton, who wrangled the bumpy rights on his backhand, while Brazil's Rodrigo Koxa and Portugal's Antonio Laureano both score some bombs out the back, doing their best to negotiate the chop, steps and froth on the wave faces.

The swell may peak under the cloak of night this evening, but the size is expected to hold into the weekend. The WSL has a team on the ground at Nazare and will continue to document the action as things unfold. Nic Von Rupp locks in his fins and gives his radios one last check at Nazare on January 7, 2022. - WSL / Miguel Sacramento

January 6, 2022: Atlantic Brewing Up Some Potential XXL Action For Nazare This Weekend

Surfers are currently on the way to Europe's premier big-wave venue, Nazare, for what promises to be the second major swell of the Northern Hemisphere winter.

This comes after the world's best competed at Nazare during the recent TUDOR Nazaré Tow Surfing Challenge presented by Jogos Santa Casa, which was won by the all-star tow-team of Kai Lenny and Lucas Chianca.

After that season-opener, which saw the limits of progression pushed once again, surfers are bracing for a solid NW swell expected to peak Friday afternoon at around six meters, according to Surfline's latest forecast. Though there are solid, quality waves expected all through the weekend, with light (predominantly northerly) wind expected.

This means there should be some perfect canvases for surfers to continue pushing the limits out there; Nazare has recently seen surfers -- especially Lenny -- introducing airs and big turns into their rides, on waves many would have previously been happy just to make unscathed.

Highlights: Next-Level Progression Order Of The Day At Nazare
4:15
Massive airs, barrels, and even a jet ski floater. Today was one for the books.

We will be bringing you highlights each day, so stay tuned to WorldSurfLeague.com for all the latest action.

Nazare, which is sort of like a super-sized beachbreak, is one of the best tow-surfing big wave venues in the world thanks to an 130-mile-long underwater canyon which funnels swell into a headboard that is a half-mile offshore. This concentrates the energy of the swells, producing some of the largest, most intense waves on the planet. At its deepest point, the canyon reaches over 16,000 feet (5000 meters) deep

The best season for Atlantic ocean Nazare swells is from October through March, although earlier the better as winter brings colder and stormier conditions which make it challenging to tackle the giant waves.

Why Nazaré Is The Biggest Wave In The World
1:20
Garrett McNamara covers the bathymetry, swell direction, and unique features that appoint Nazaré as the "8th Wonder of the World."

The 2019 World Champion just dropped a new edit, full of tow action and the explosive surfing he's famous for.