LOWER TRESTLES, San Clemente, California (September 07, 2022) - The World Surf League (WSL) has put the World Title-deciding Rip Curl WSL Finals on Yellow Alert for a probable start within 24 hours from now. The forecast at Lower Trestles, San Clemente, CA looks very promising for the men and women's WSL Final 5 to face-off for the World Title. This one-day, winner-take-all event will decide the undisputed 2022 World Champions. Tune-in tomorrow, September 8 at 7:30am PDT for the official call, where the competition could be ON at 8:00am PDT. "We're going on Yellow Alert for a possible start in the next 24 hours," said Jessi Miley-Dyer, WSL SVP of Tours and Head of Competition. "Right now it looks like we've got great waves on Thursday and Friday on the forecast, but we do have this potential storm with the potential for onshore winds for Friday. Having said that, that's why we're going on Yellow Alert. We know we're going to get good waves and we could be on."

All eyes will be on the Rip Curl WSL Finals and the world's best surfers including ranking's leaders Carissa Moore (HAW) and Filipe Toledo (BRA) as they try to fend off a hungry field of contenders looking to dismantle their phenomenal seasons. A battle of Olympic Medalists will start the hunt for a World Title with Gold Medalist Italo Ferreira (BRA) taking on Silver Medalist Kanoa Igarashi (JPN) in men's Match 1. This will not be the first time the two have faced off with Igarashi leading the duals two-to-one, but it will be the most important.

"I think Italo (Ferreira) and I have had a lot of heats together and I think I owe him one (laughs)," said Igarashi. " If someone were to ask me if I had to pick one surfer to compete against at Lowers it'd be Italo. In saying that, it's a huge task at hand and if I want to be a World Champion there's a lot of other guys I have to go against, but right now I just have to focus on my first heat." A marathon Rip Curl WSL Finals day awaits for the likes of Igarashi and seven-time WSL Champion Stephanie Gilmore (AUS), who are both seeded No. 5 and have the longest path to achieve a World Title. Depending on how the action goes, it could come down to the two most decorated women on the CT, Gilmore and five-time World Champion Moore in the Title Match. If Gilmore were to take the win she would have the most women's World Titles in history, but Moore is hot on her heels.

"It's amazing that Carissa (Moore) has five World Titles now and is going for a sixth, that's a little scary (laughs)," said Gilmore. "An eighth World Title would be amazing and I'm excited for the opportunity." World No. 2 Jack Robinson (AUS), and World No. 3 Ethan Ewing (AUS), both have a shot at being the first man to bring home a World Title for Australia since Mick Fanning in 2013 to revitalize one of surfing's powerhouse nations.

"It's been a pretty stressful year with not much time between events to take it all in but I'm excited to be here," said Ewing. "All these guys and women just inspire me everyday to be better and I'm happy to be here with them. I'm just going to do my best and see where it takes me." Johanne Defay (FRA) is already ahead of where she ended last season, coming to the Rip Curl WSL Finals as World No. 2 after entering as World No. 5 in 2021. The French competitor surged through the 2022 season but will have to deal with the winner of women's Match 2 featuring 2021 World Title runner-up Tatiana Weston-Webb (BRA) and the winner of women's Match 1, Gilmore or 2022 standout Brisa Hennessy (CRI).

"I started fifth last year and I'm second this year so it's a big change and I feel ready to take on the challenge," said Defay. "I think it's way better to be second, there are less heats to do and just like everybody else I think it was a big year. We are all super tired but at the same time proud, and I feel like everybody is taking it very simply and just wants to put on their best. I think a good show is coming." 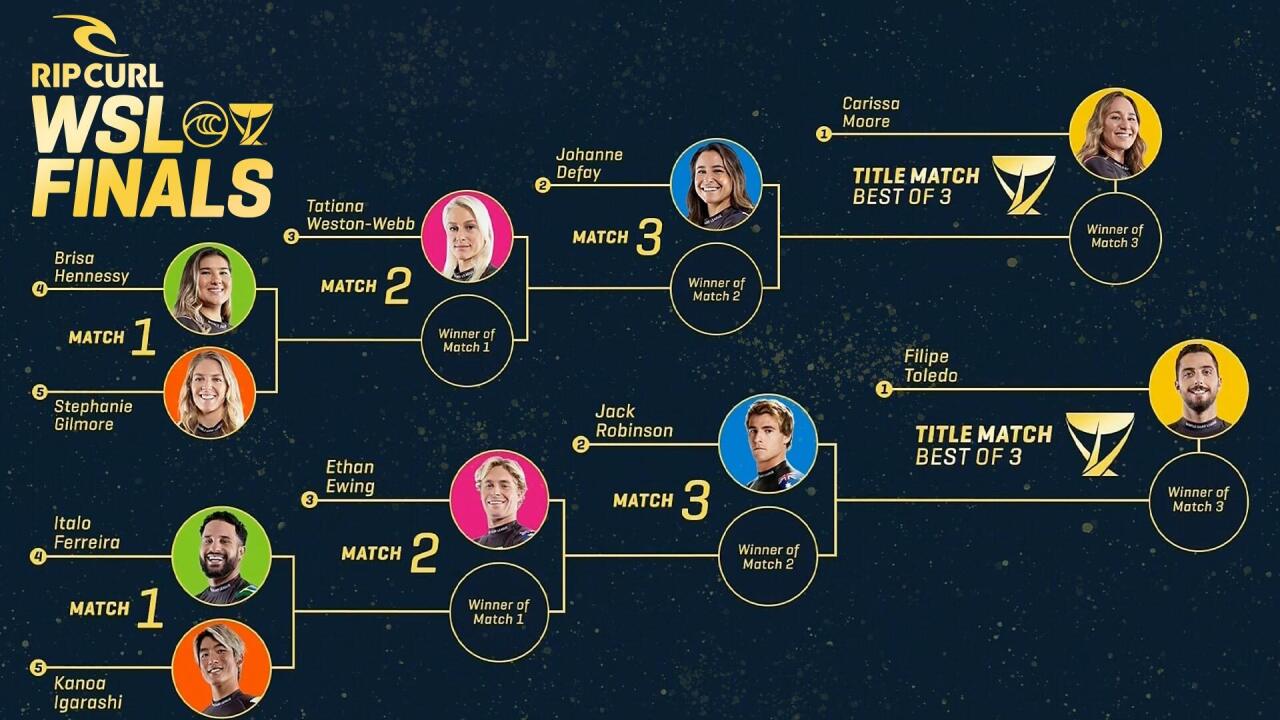 All roads lead to the grand finale, the Title Match with World No. 1s Moore and Toledo. All competitors are looking to cement themselves in surfing history on the sport's most highly-anticipated day of competition, but only one woman and one man will walk away with the honor of being this year's World Champion.