Opening day of the 2014 Vans US Open of Surfing commenced with 2-Star Pro Junior action. The top under-21 talent powered through Rounds 1 and 2 of competition in peaky one-to-three-foot waves at Huntington Beach Pier, deciding the division's Quarterfinalists.

Stop No. 5 of 7 on the 2014 ASP North America Pro Junior Series, the Vans US Open Pro Junior offers crucial points towards surfers' qualification campaigns for the prestigious World Junior Championships.

Kanoa Igarashi (USA), 16, Huntington Beach local and wildcard for forthcoming Prime-rated action, stormed through the opening rounds, posting the day's highest heat total of 17.16 while collecting two heat wins. Igarashi hopes to carry his Pro Junior momentum to the main stage in order to succeed against the more experienced competition in the Prime division. 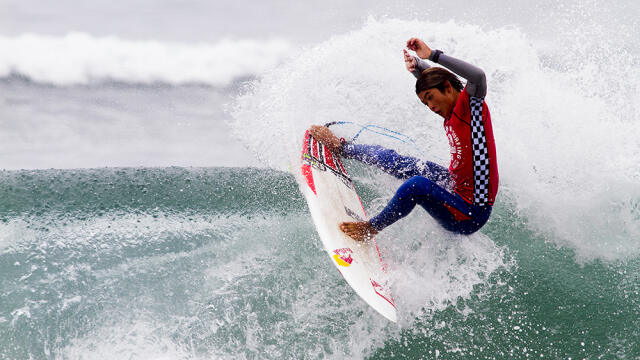 "The waves are pretty good and the forecast was looking really bad, so I'm happy," Igarashi said after his Round 2 victory. "You can't ask for much more. I'm just trying out some boards and different fins and stoked to surf two heats before the main event and build momentum. I feel like I surfed better than my first heat and hopefully I'll do better in the next one. The men's event will be a lot harder and I'll have to surf my best." Yago Dora (BRA), 18, was electric on opening day of the Vans US Open Pro Junior, collecting the day's high score with a near-perfect 9.77 for two big air-reverses. The young Brazilian is relatively new to competition and is looking to gain experience against the world's best juniors in Huntington Beach.

"It's my first time here at the US Open, so it's a really good start for me," Dora said. "That nine, it was a set wave and the biggest of the heat. I got lucky to have two nice sections on the same wave and was able to land the airs. I started to surf kind of late, and I'm not very good competing yet. I need to get experience and that's what I'm doing right now." Spectators fill the beach for the first heat of the Pro Junior division despite a morning fog delay. - WSL / Kenneth Morris

South Carolinian Cam Richards (USA), 19, was consistently solid through Rounds 1 and 2, claiming two convincing heat victories with a pair of 15-point heat totals. The advancement to the Quarterfinals marks the East Coaster's career best result at the venue.

"I'm really excited with my start because every year I do this I've lost in the second round," Richards said. "To make it past the second round is an accomplishment and I'm having fun. I use California as a home base in between trips and it's a good place to be and I feel comfortable in these conditions. I've surfed Huntington a bunch so it feels like home."

The Vans US Open of Surfing runs from Saturday, July 26 through Sunday, August 3, 2014. Live webcast will begin Monday, July 28 via www.usopenofsurfing.com and www.aspworldtour.com.

- WSL / Matt Dunbar
Friday, May 21, 2021
Dora Drops The Highest Heat Of The Event With A Pair Of Massive 9-Point Airs

Yago Dora turned his heat into a highlight reel taking to the sky with two nine-point airs, securing his third Quarterfinal of the

As competition madness unfolded, check out some of the top surfers who took on Huntington Beach.