Competitors were forced to adapt to constantly changing conditions at Praia da Tiririca for another full day of surfing at the ASP 4-Star Mahalo Surf Eco Festival presented by Skol. A slight increase in swell supplied waves in the 3-to-4-foot range (1-metre) and provided the remaining athletes with an ample selection of high-scoring opportunities.

Paul Cesar Distinguin (FRA) pulled off the highest score of the event after pulling into a deep barrel in his Quarterfinal heat against Krystian Kymerson (BRA). 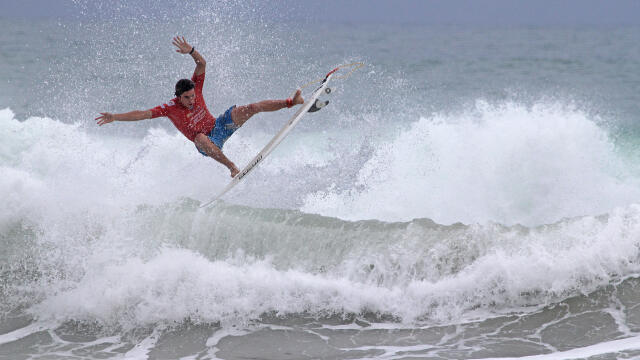 "That was an incredible wave," said Distinguin. "I was really deep in the tube and it felt great coming out. I also landed a few airs, so I'm stoked to have gotten the highest score of the event. I competed here last year, but I didn't do that well. I'm happy that I made it this far. The waves are a lot better this year. They're opening up more and you can do a lot of turns, airs, hacks and even some barrels."

Alex Ribeiro (BRA) has been on fire since the first day of the Mahalo Surf Eco Festival. Currently leading the ASP South America ranking, Ribeiro has consistently earned high scores. During his Round 5 heat, Ribeiro obtained a 9.00 on a huge air-reverse then followed that with a 16.60 heat total in the Quarterfinals to eliminate Jay Thompson (AUS) from competition. "My board feels great in these types of conditions and I'm super stoked to make it into the Semifinals," Ribeiro said. "I really want to win here because it's very important to increase my ranking on the QS and to strengthen my position for the South American title. My strategy was to paddle for the largest sets that would let me get two strong maneuvers in."

Facing Ribeiro in the Semifinals will be Yago Dora (BRA), who has shown spectacular surfing, huge airs and exhilarating come-from-behind victories throughout the ASP 4-Star Mahalo Surf Eco Festival.

Local surfer Yage Araujo (BRA) had the full support of the crowd at Praia da Tiririca behind him, but was defeated in the Quarterfinals after an inspired performance by Jihad Khodr (BRA).

"I'm from Matinhos, which is a rolling righthand pointbreak, so I'm not used to peaky beachbreaks like this one," Khodr said. "I think I've been pretty lucky during the event, but this heat was a little easier. It seemed like I always had priority and I was able to catch all the waves that I wanted. I'm stoked to make it this far because it's been a long time since I've had a good result at a QS event."

The ASP 4-Star Mahalo Surf Eco Festival presented by Skol will distribute U$95,000 and 1,000 ASP Qualifying Series ranking points. Watch all the action LIVE at surfbahia.com.br.