The Qualification Series (QS) rankings experienced another shakeup as the O'Neill SP Prime presented by Guarana Antartica narrowed to its final eight competitors.

Filipe Toledo (BRA) once again delighted the spectators who filled the beach at Maresias for Day 5. Toledo combined fierce roundhouse hacks with a superior air game to defeat Leonardo Fioravanti (ITA) by a total of 17.83 to 10.67 in Heat 8 of Round 5. Having made the Quarterfinals, Toledo is now tied with Jadson Andre (BRA) for the No. 2 spot on the QS. Another high-flying day for Toledo. - WSL

"Just being here with my friends and family is great, but being here while surfing well during the contest is even better," Toledo said. "I've been very focused before all of my heats. I've been studying the waves and been paying attention to all the details before I hit the water. I've been feeling so thankful for my family and for everything that's happened so far at the event. My goal is to reach the Finals and hopefully win the entire event."

Toledo will face Jack Freestone (AUS) who, despite solid performances, has been flying under the radar at Maresias.

"Conditions have been changing a lot during the event," said Freestone, who now sits in the 11th spot on the QS rankings. "One second there's really strong onshore winds, then the wind dies down and the waves get good. So you just have to be smart and adapt quickly. It's good to know that I'm near qualification, but I think I need to win two more heats before I can relax. Tomorrow's going to be difficult against Filipe. He's been surfing like a maniac and has been the in-form surfer of the event." 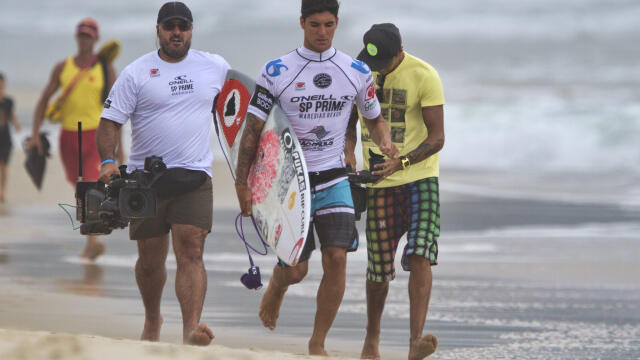 World No. 1 Medina has been eliminated from competition. - WSL

Julian Wilson (AUS) posted the biggest upset of the event when he knocked out local surfer and current World Championship Tour (WCT) leader Gabriel Medina (BRA) by a score of 15.30 to 14.43 in Round 4.

"I really needed to win that heat and I knew it was going to be difficult," stated Wilson. "That was probably the toughest heat I've had against Gabriel, because he's such a great surfer, plus he's competing at home here in Maresias. The waves have gotten smaller and I just wanted to wait for the larger sets. It's unfortunate for Gabriel, but I really needed the ranking points and I wish him the best of luck during the Title Race at [Pipe Masters]."

With the completion of Round 5, Wiggolly Dantas (BRA) now has 16,465 points and is the new leader on the QS rankings. Dantas is already guaranteed a spot on the 2015 WCT and will be part of a new group of rookies reaching the elite level for the first time. In addition to Dantas, Italo Ferreira (BRA) has jumped to No. 5 on the QS rankings and has also ensured entry onto the WCT after reaching the O'Neill Quarterfinals. Ferreira has solidified a spot on next year's WCT after making the Quarterfinals in Brazil. - WSL

"I really wanted to qualify for the WCT at this event so I'd have less pressure going to Hawaii," Ferreira said. "I know it's going to be very difficult for me there. It will be the first time that I'll compete for the Triple Crown, so I didn't want to have to rely on getting a result there. I'm going to surf more relaxed now that I've achieved my dream of getting on Tour."

As a result of their performances at the O'Neill SP Prime, Nathan Hedge (AUS) and Carlos Munoz (CRI) have both catapulted up the QS rankings. Hedge began the competition in 46th and is now sitting at 25th. Munoz has jumped from No. 42 to No. 23. Hedge and Munoz are set to face each other in the Quarterfinals so only one of them will be able to further improve their standings.

A call is set for 7:30 am (local time) for the last day of the O'Neill SP Prime. Watch LIVE as Maresias crowns a champion.

European surfers Fioravanti and Aranburu saw a swell headed toward the beautiful Polynesian Island and boarded the plane for a surf trip.

- WSL / Damien Poullenot
Friday, July 31, 2020 Ben Collins
A Belated North Shore Edit To Get You Pumped For Next Winter

Italy's Leo Fioravanti just dropped an edit from his time on the North Shore last year, and it was worth the wait.