Peter Townend (AUS), the first-ever ASP World Champion (1976), was on hand at this year's Hainan Wanning Riyue Bay International Surfing Festival to give the Chinese surfers some coaching. 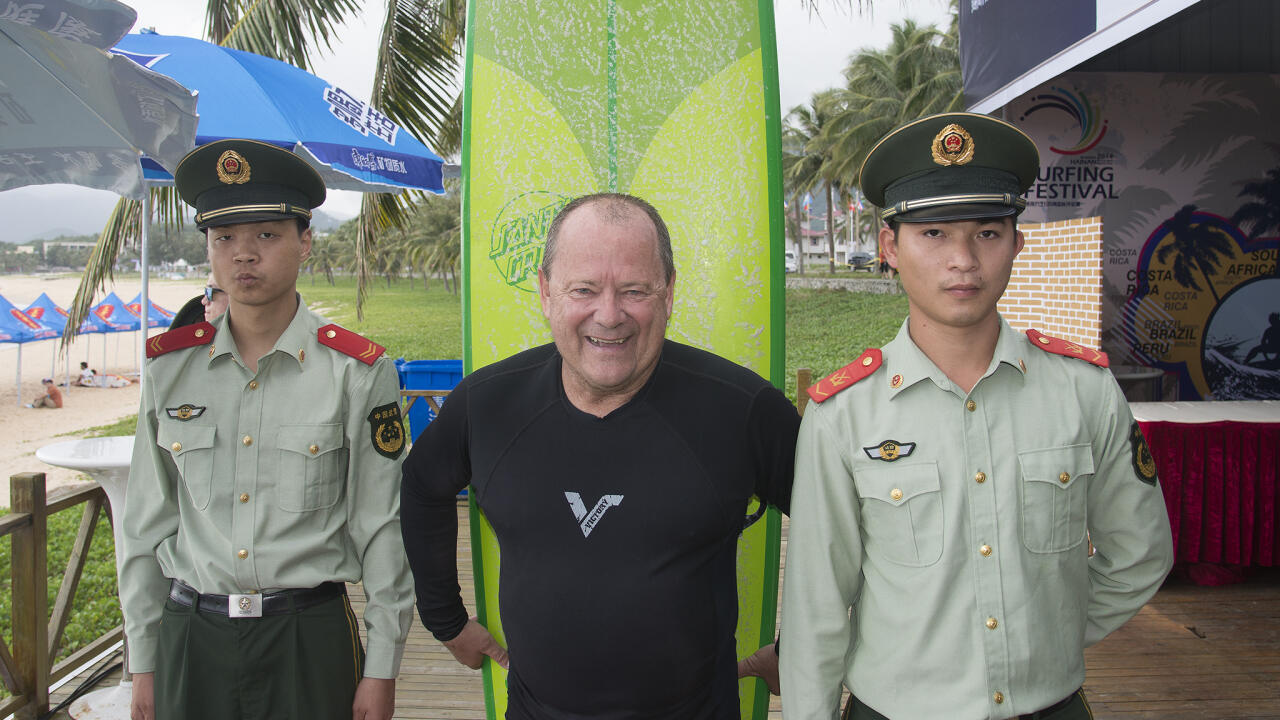 â€œNever in my wildest dreams did I think I'd be in China coaching Chinese surfers,â€ Townend said. â€œThis is my first time surfing in the ocean in China, I've been to the river wave -- they call it the Silver Dragon. China's surf culture is in its infancy, but the roots are being put down and they are doing some fantastic things here. I've spoken with Government officials from Beijing and they love the sport and lifestyle and they see the benefits for the youth and the environment.â€

When asked about this year's ASP World Titles, he added, "Being from the Gold Coast I'm always happy to see Mick Fanning (AUS) win, but I think it would be fantastic for the sport to see Gabriel Medina (BRA) win his maiden Title and think he's going to do it after seeing the way he won Fiji and Teahupoo. On the women's side, I'm 100 percent behind Stephanie Gilmore (AUS).â€

Nick Squiers (AUS) won the individual gold medal in yesterday's ISA China Cup and his good form continued today in the Hainan Classic. Squires easily advanced through two rounds with big scores and solid surfing and is hungry to once again be on the top of the podium at this event.

â€œWinning the gold medal yesterday was fantastic," he said. "It's something I'll never forget, but I had to quickly switch that off and get back into competition mode. First place wins 15 grand and I want the winner to be me. This is a really important competition and I'm feeling fit and focused.â€ Medi Veminardi stomping his back foot. - WSL / Will H-S

Bruno Galini (BRA) and Medi Veminardi (REU) both powered through their Round of 64 heat at Riyue Bay today. Both surfers left their mark on the heat with Galini advancing in 1st position, while Veminardi advanced in second with the highest single wave score of the heat â€” 7.83, for a series of sharp and fast frontside turns.

â€œThe surf is really challenging,â€ Veminardi said. â€œAt one point in the heat there hadn't been a wave for five minutes and I couldn't believe we were out there for a competition. I was lucky to get the best wave that came through, it allowed me to open up and do a couple of turns. I was trying to put myself in position for the best waves and that heat worked out for me.â€

Michael February (ZAF) was another of the day's standout surfers, tearing through the tough conditions to post a 7.33 and a solid heat win over Harrison Mann (AUS) who also advanced in 2nd position and Gilbert Lopez (CRI) who was eliminated. February will now match up against Dale Lovelock (AUS), Kaisa Kawamura (JPN) and Miguel Tudela (PER) when competition resumes.

â€œI've never stared so hard at the ocean hoping for waves,â€ February said. â€œI finally got a good one after a while. It feels good to post some good scores, if the surf stays small at least I know that I'm capable of getting scores.â€ After surfing in today's small conditions Tudela has now competed in some of the biggest and smallest surf of 2014 â€” he also competed in July's [Billabong Pico Alto](http://www.aspworldtour.com/events/2014/mbwt/1036/billabong-pico-alto] Big Wave World Tour event in his home country. In yesterday's ISA China Cup, Tudela added another accolade after his team took out the Gold Medal No. 1 position.

â€œI surfed through four or five heats in the ISA event so I know this wave pretty well,â€ Tudela said. â€œI like that I can surf both big and small waves, you never know what you're going to get in a competition so it's good to be well rounded.â€