Skindog on Big Wave Surfing, Risks and All
Ken Skindog Collins opens up about the dangers of big wave surfing and the friends he's lost int he process. But BWRAG is training them to know what to do when something goes wrong.

Before they paddled out for Thursday's Punta Galea Challenge, some of the world's best big wave chargers got schooled on how to handle emergencies in the water. The North Shore-based Big Wave Risk Assessment Group (BWRAG) ran a two-day summit to train heavy-hitters from Jamie Sterling to ASP Big Wave World Tour (BWWT) Commissioner Peter Mel. 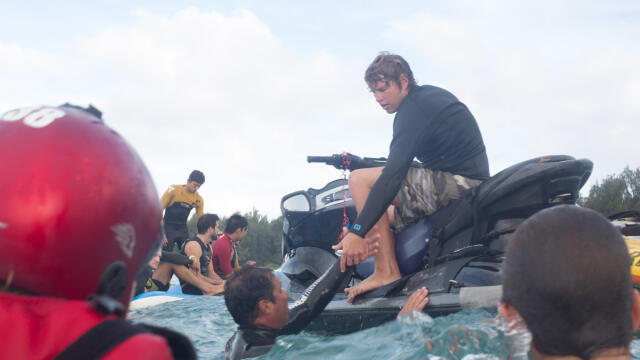 Kohl Christensen (HAW) and Danilo Couto (BRA) launched a safety meeting informally four years ago after the death of big wave paddle surfer Sion Milosky. "Danilo came back from Maverick's pretty shaken up," Christensen said. "Together we decided the best thing to do would be a CPR class. Since then it's evolved into something much bigger than that."

After the class in Christensen's North Shore barn, he and Couto partnered with Liam Wilmott, an events consultant and North Shore big wave rider, and Brian Keaulana, legendary Hawaiian safety expert, to take the course to the next level. In the years since, they have expanded the training and included the broader big wave community. With sponsorships and a venue at Turtle Bay Resort, they have been able to enhance the course while keeping it free for the surfers. This year, the ASP presented the course.

The summit now includes training in emergency rescue breathing by local EMTs, spine protection skills by local lifeguards, jetski training for tow-in sessions and, throughout it all, an open forum.

"The average person doesn't have all the answers," said Keaulana, who fielded some queries from the back of the room. "They only know questions. So that's the kind of stuff we're doing, developing all the answers for these guys, so they don't have questions."

Big Wave Chargers Talk Eddie
Before the heaviest hitters of the big wave world celebrated Eddie Aikau, they honored his legacy with a safety summit.

With practicality and relevance at the core of the training, queries ranged from how to check a pulse to whether a jetski could accommodate backboarding. When talk of equipment came up -- defibrillators, among them -- cost, effectiveness and ease of use were part of the conversation.

When I first started doing this, it was a selfish thing. Now I do it because I want everyone to succeed. -- Peter Mel

Perhaps the most important -- if not unintended -- outcome of BWRAG's summit was the communication it fostered in a sport that's fundamentally solitary. "When I first started doing this, it was a selfish thing," Mel said during the summit. "I was doing it for my own pleasure, my own career. And now I look at it as this whole room [of big wave surfers], I do it because I want everyone to succeed, and that's the difference.

"All of a sudden, we're not so guarded. We're opening up communication to all of the surfers globally. We can actually share the experiences. To me -- watching Ian Walsh and Billy Kemper talk about their wave at Jaws, that they've grown up surfing, and expressing all the hazards and dangers and successes, that's a great thing to see. Because it hasn't always been that way." Christensen, who's logged time in the snow as well as the surf, sees parallels between skills in the mountains and skills in the water. While it's standard to bring a buddy and avalanche gear in the backcountry, the practice is less than routine in big waves.

"In surfing there is not really that same formula," said Christensen. "A lot of guys surf by themselves. A lot of guys go to the outer reefs without buddies who know CPR. That's what we're trying to do here. To create an environment where the people that you find yourself surfing with can save your ass if you're the one that gets hurt, and you can save theirs."

Kohl Christensen makes a serious drop to get his name on the scoreboard at Waimea Bay.

There are only four heats per round, but you won't want to miss any of them.

Some of the world's best big wave chargers discuss the honor of being invited to surf in the prestigious competition.

Some of the world's top big wave surfers discuss the waterman's legacy at the opener for the annual event in his honor.

A look at the high-scoring conclusion to the first Northern Hemisphere event on the 2014 BWWT season.

In a high-scoring Final, Nic Lamb earns a 10-point ride to regain the lead.

Some of the worst wipeouts from the first Northern Hemisphere stop on the Big Wave World Tour.