When it comes to representing the business of big wave riding, Big Wave Tour Vice President Gary Linden decided it was best to lead by example. At the tender age of 65, he just scored his first big wave at Jaws, site of the BWT's Pe'ahi Challenge. "Gary Linden is always one to walk the walk and challenge himself," stated BWT Commissioner Peter Mel. "It doesn't surprise me to see him give Pe'ahi a go. He is a true inspiration."

Though the event hasn't yet run, Linden was able to cross an item off his bucket list and, just maybe, set a record in the process. The big-wave hellman chatted about his experience at Jaws, the Paige Alms barrel and more.

World Surf League: You recently caught your first wave at Jaws. What was that experience like?
Gary Linden: I talked to Greg Long (USA) before and he said, "No, you can't do it, I don't think you can do it Gary. It takes all my athletic ability, every drop I make." So I had this in the back of my mind. But I've surfed all the other big waves, every spot we have on Tour, everywhere. It was on my bucket list to get one at Jaws.

I had some health issues this year -- I had an arthritic hip and some heart problems and I'm going, 'it's probably not going to happen'. I'm bringing all that baggage on the day. But I've still got my suit, I've still got my vest, just on the odd chance that I thought I could do it I would. I was sitting there watching all the waves and thinking. Finding out where I thought I could fit, what part of the peak. I've become really good at reading the waves so I don't put myself in the wrong position.

I thought, this is my chance. If I'm ever gonna do it, it's right now.

I sat there and my friend Ben Wilkinson (AUS), one of the guys on the tour who's really just a genuine human being, paddled over and goes, "Gary you want to catch a wave?" And I told him I didn't have a board. And he says, "Well I'll loan you this one." He's like 260 (lbs.). He's got a big old, thick board. I knew I was at least going to be able to get into it, I didn't know if I'd be able to turn it, but I'd get into it. I told him to go out there and surf and catch one and come back. So he comes back again says, "You wanna go Gary?" And I thought, 'This is my chance, if I'm ever gonna do it, it's right now.' 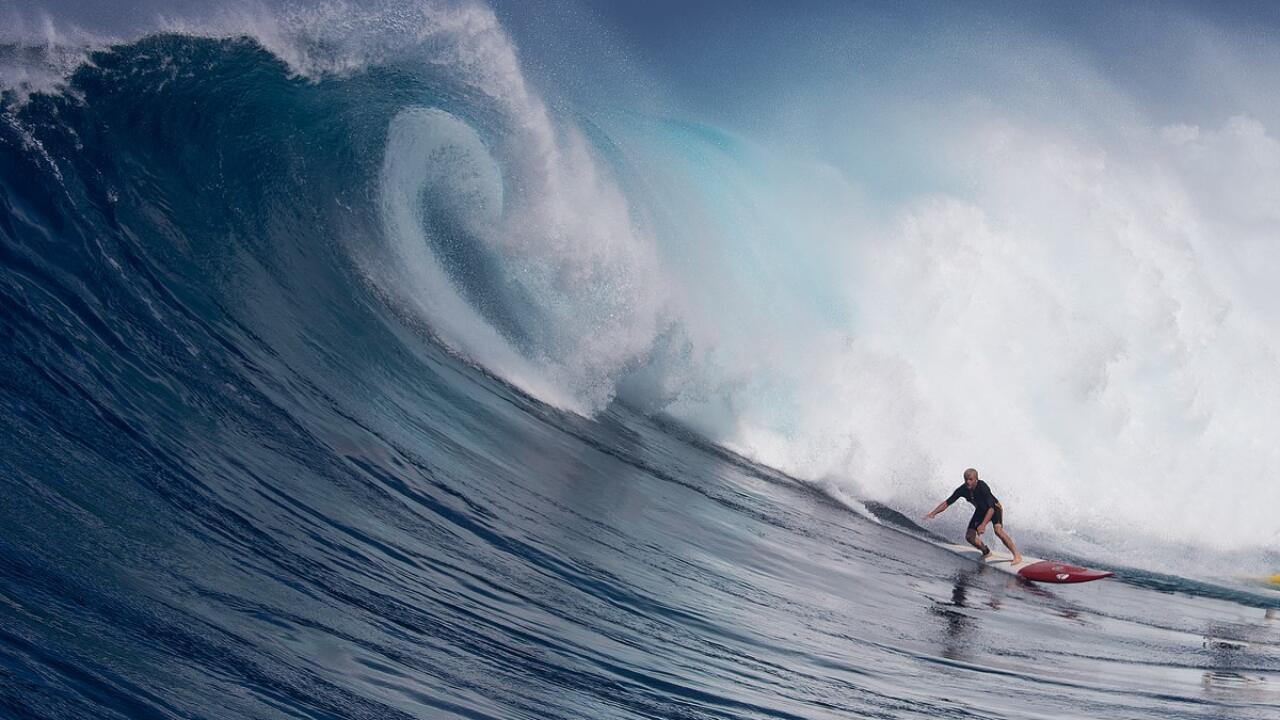 I suited up, paddled out, I knew where I was going to sit and I knew I had to do it quick because I didn't want to get caught out there for a while and I picked off a good one. I made it the bottom and got clipped by the wall just at the end. That's the hard part about Jaws, every wave pretty much barrels and you got to be able to set up. This board was just too big for me to really maneuver all that well, but it got me in which is what I wanted. It got me a notch. It was an amazing feeling.

WSL: What was the response from the crowd like?
GL: It was so gratifying to see the emotion and the joy on all the people out there that watched me catch it. I'm 65 and I may be one of the oldest guys to ever paddle in out there. If you're trying to lead a Tour or direct an event, it's nice for the people to know you can actually do it. There was so much love from everybody that I was actually able to do that, I think it encouraged them to know that when you reach 65 life's not over.

WSL: Tell us about your journey to founding the BWT.
GL: I realized that big wave surfing wasn't a sport, but more of a lifestyle for guys my age, in their 40s-plus, who had enough money to buy the bigger boards, could take time off work and chase the bigger swells. You have to have a flexible schedule, so none of the young kids were pursuing the sport. We weren't really seeing the limits of big wave surfing being pushed by people 18-30 when you're really in your prime athletic ability. I had the experience of working with the Tour and doing the format and I thought, 'Well, I want to help create a sport out of big wave surfing.'

The first big wave I ever caught was during the swell of the century at Rincon in 1969. The same day that Greg Noll surfed his wave at Makaha, I surfed Rincon and it was really, really big. I got a late start in pursuing what we now refer to as big wave surfing. But philosophically I was always trying to catch the biggest wave, no matter where I was.

Alms Scores Wave of the Winter
Maui local Paige Alms pulls in to what is arguably the biggest barrel ever ridden by a woman at the punishing reef.

WSL: Paige Alms also caught a great wave that day, did you see it happen?
GL: I was right in the channel, I saw the whole thing. Paige Alms just pulled into this barrel and it was fully legit. It was in the morning and the tide was a little higher, but there was a nice little barrel that came through. She pulled up into and we didn't know who it was, we thought it was some guy. She made it through the second section and totally disappeared and then came out and we go, "Dude, it's Paige!" The whole crowd then just went berserk, everyone was so happy. It set a new milestone for women's surfing. It's probably the best barrel that any woman has ever caught and recorded. She's paid her dues out there, she's out there all the time and her knowledge came through.

Watch: Take a Tour of Maui with Paige Alms

WSL: How does your family feel about you still taking on big waves?
GL: My wife and I have been married almost 41 years now so she's pretty much used to it. I think she enjoys the fact that I'm able to pursue something in my life that gives me so much reward. You know as a surfer, you're always able to share that stoke with the people that you love. If you're grumpy you go surfing, you come back and you're all bubbly and happy. So she's pretty comfortable with it.

Remind yourself how good it feels so you get past the fear to push yourself over the ledge.

My oldest daughter is probably the one that gets more nervous than anybody else. One day we were having Thanksgiving dinner, she lives up in San Francisco, and I had to go surf Maverick's that day. My board hit me above the eye and I had to go to the emergency room after surfing and get eight stitches. I was late to Thanksgiving dinner. So that's the big family joke.

I think they have confidence in me that I won't take unnecessary risks. I caught my one wave at Jaws and got out. It's not like I'm out there trying to get into the Guinness World Records or something. I think generally they're proud of it instead of wanting me to stop.

WSL: Can you tell us what you do to train?
GL: I never had to train. I shape surfboards which is pretty physical work, so I always kept in good shape. I live in Oceanside [Southern California] where my factory is and the waves out the back are closeout beachbreaks most of the time. So I ride a shortboard in closeout beachbreaks in all conditions, I try to go out everyday. You learn to read the waves -- wind-chopped, beachbreak is the hardest stuff to get in a good ride. I think reading the swell is really important.Paddling hard and getting to your feet quick is really important, so that means using a shortboard. Then being able to turn in a closeout helps train your reaction speed.

Mentally, I think you remind yourself always how much you want it. Think about it, dream about it. Remind yourself how good it feels so you get past the fear when you have to push yourself over the ledge. I mentioned I've had some health problems so I have a physical therapist helping me with stretching and building the core up. I watch what Nic Lamb and some of the other guys do in the gym, really physically getting themselves built up.

I think core training is probably good for anybody, but if you don't have it the most important thing is what's in your mind. If you tell yourself you can do it, you can do it. The younger kids I make boards for always joke about me, "Gary doesn't surf for a month and goes out and catches some big waves, how does he do it?" (laughs) You have to just keep your mind focused.

WSL: Do you remember your heaviest wipeout?
GL: Yeah. My heaviest wipeout was at Pascuales in Mexico. I was down there volunteering as head judge for the Mexican National Surf Championships. It was pretty big, we had to move the contest from Pascuales to another break. We came back in the afternoon and these big rights were just draining. There was nobody out just before dark and I couldn't sit there and watch it, so I paddled out by myself.

I got out there and it's the heaviest wave. I lined one up. I got to the bottom and made the drop. The lip broke on my arm and knocked my shoulder into my jaw and just about knocked me out. I essentially punched myself with my shoulder. I was semi-conscious underwater and remember going, 'Woah, I'm pretty deep. It's kind of cool.' Not really being all there, I almost drowned, but I popped up. That was my heaviest wipeout.

WSL: Where does the Big Wave Tour go from here?
GL: I'm just hoping we can keep the momentum going and make correct calls and get some events up there. The real goal is to create a sport and have contests all the time. I'm just really thankful for the opportunity to work with this group that is so intent on making surfing in general part of the public sport portfolio.