Cloudbreak is located about 2 miles off of Tavarua. - WSL

THE ISLAND: Being in the middle of the ocean and all, the island of Tavarua is a perfect spot for a surf contest. That said, getting there is an adventure in itself. You'll need to hire a bus or shuttle to get to the harbor and then hop on a water taxi. The light at the end of the tunnel: Coming up on the island is an excellent first photo of the trip.

Once you've made it there, you're in island paradise. Fiji is a flawless destination that offers everything from perfect surf and unique diving and fishing expeditions to a laid-back waterfront for a little R&R.

Slater's Tavarua Heli-Tour
Kelly Slater breaks down the intricacies of Restaurants and Cloudbreak from a chopper for the GoPro Break Breakdown Fiji edition.

THE WAVE: The contests in Fiji have two world-renowned lefthanders to work with. The deep-water beast of Cloudbreak breaks about a mile out from the island and offers up heavy barrels and opportunities for big carves. If Cloudbreak stops pumping (admittedly a rarity) there's Restaurants, a high-performance lefthander along the reef in front of the island restaurant (hence the name), an ideal backup spot.

Paradise extends to the breaks. The promise of consistent, 6-to-8-foot waves get surfers excited to hit this stop of the Tour. But surfers beware: The surf here can get heavy. There isn't much water between you and the reef, so that getting slammed and leaving with a battle wound -- at a minimum -- are big possibilities. 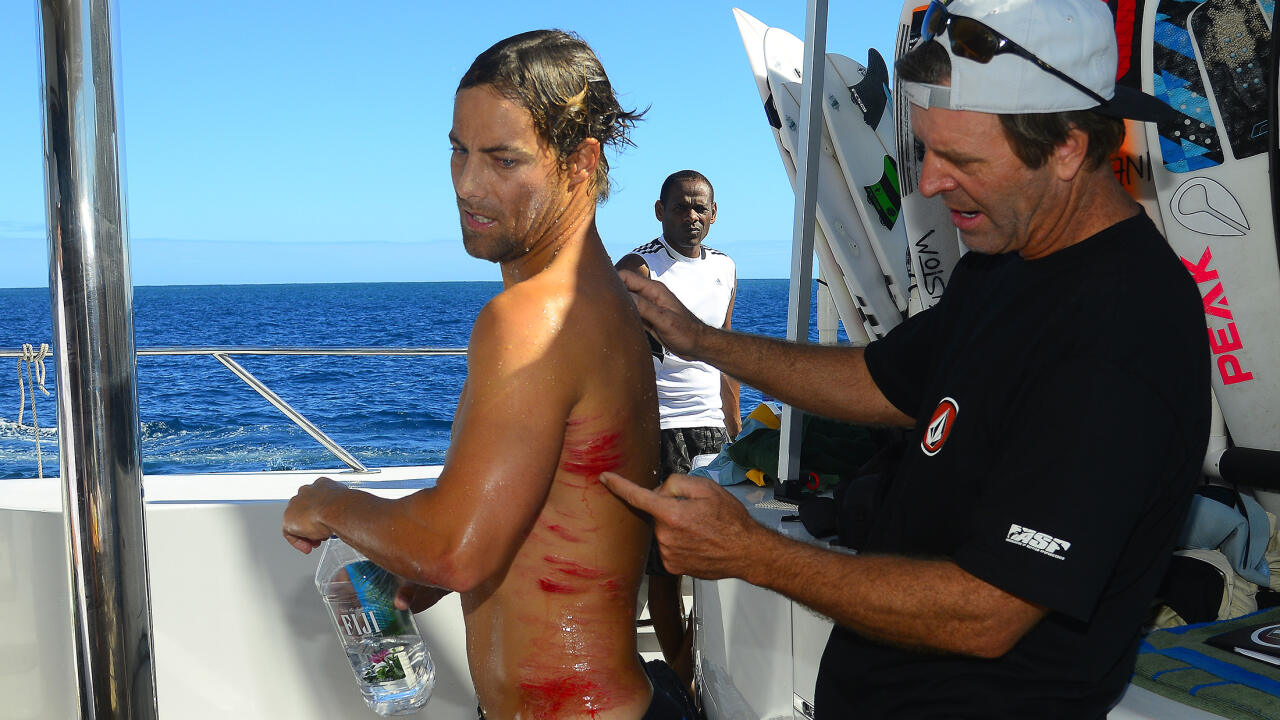 Former CT competitor Travis Logie after a losing battle with the reef at Cloudbreak. - WSL

CHAMPIONSHIP TOUR HISTORY: The 2016 Fiji Pro is the fifth edition of the event since its 2012 resurrection. The event has seen some tremendous highs and some gruesome lows. Cloudbreak has seen three perfect heats -- Kelly Slater served up a 20-point total at the 2013 event and Owen Wright wracked up two perfect heats last year. But an early round in 2013 saw Glenn Hall air-lifted off the island after going over the falls and breaking his back.

The Fiji event was a staple on the women's Championship Tour for six years, running from 2001 to 2006 as the Roxy Pro Fiji. It returned two years ago to much fanfare.

NOTABLE: After three years of being an Aussie-dominated event, competitors from the US took control, with Americans winning the next six events. The 2014 event was one of the three event wins that led to Gabriel Medina's historic World Title for Brazil. Sally Fitzgibbons, who won the 2015 event in dramatic fashion, could three-peat should she take down the field again this season. - WSL / Stephen Robertson

Last year continued the tradition of fantastic female performances, ending in dramatic fashion. After rupturing her eardrum, Australian Sally Fitzgibbons headed back out and took the event for the second consecutive year with two nine-point rides in the Final. The Fiji Women's Pro also marks a critical time on the women's Tour: It is the halfway point of the season and, thus, a crucial moment for valuable rankings points.