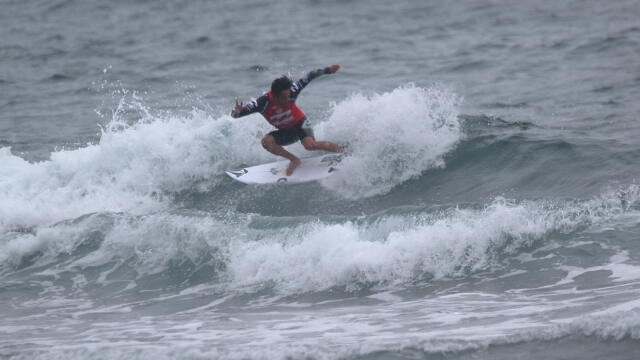 The WSL Japan Billabong Shikoku supported by Player Resort, a men's and women's QS 1,000 event, commenced this morning at Ikumi Beach, Toyo Town, Kochi. Shikoku. The opening day of competition witnessed action from the men's Round of 128 and the women's Round of 40.

Conditions at Ikumi Beach were 1-to-2 feet with light winds and rain. The event's official forecaster, Namidensetsu, predicts the following:

"The Pacific highs centered in the Shikoku Seas is expected to spread wide towards the eastern Japan widely, however the rainy fronts are expected to stay near Kyushu.

In Shikoku the south west winds from the southern area of the rainy fronts is expected to retain along with the elements of the Pacific highs centered in the Shikoku Seas should send breezes to create slight east to south-west swell.

The south-west winds are expected to pick up during the day and damage the wave surfaces."

Event defending champion and the top-seeded surfers for the event are Hiroto Ohara (JPN) and Masatoshi Ohno (JPN). Top athletes including Jackson Baker (AUS) are present this year as well.

Ikumi Beach is located on the Shikoku, known nation wide for it's natural beauty as well as it's proximity to the famous river mouth.

The QS 1,000 events hold waiting periods from June 3 through June 7 and is co-sanctioned with the JPSA. The official status will be indicated on the WSL Japan site as well as the WSL Japan Official Twitter and Facebook Pages.