GoPro Break Breakdown
1:04
Three-time World Champion Mick Fanning talks through one of the fastest waves in the world.

In 2014, the J-Bay Open was reintroduced to the Championship Tour after a two-year hiatus. Supertubes delivered, with one of the most glorious Finals of the season as Mick Fanning (AUS) and Joel Parkinson (AUS) -- good friends and former World Champs -- battled each other in perfect conditions.

Starting July 8, the world's best will be back at the iconic South African righthander for Stop No. 6 of the Championship Tour. The event marks a crucial turning point for surfers in the World Title talk, as well for those whose current rankings need a boost to requalify for the 2016 Tour.

There are few who have a more intimate knowledge of and deep connection to Jeffreys Bay than Shaun Tomson. The South African native and 1977 World Champion first surfed the famous righthander in 1968 when the wild, remote area was even more rugged than it is today.

"Back then there were no homes on the front, there was absolutely nothing it was just sand dunes and the bush," said Tomson. "The expansion has changed, but the wave hasn't changed."

In the early days, Tomson surfed only the end of the wave known as The Point. When board lengths got shorter, surfers could harness the natural speed closer to the top at Boneyards.

"I remember it so clearly, my first surf at J-Bay was absolutely magic. It was what every young boy dreams about," said Tomson. "I was about 12 years old and we got [there] in the evening and woke up really early in the morning with my cousin Michael, my brother Paul, a friend Jeremy and my father, and drove down to the point. The surf was perfect four-to-five feet and no one out. I've been in love with Jeffreys Bay ever since." 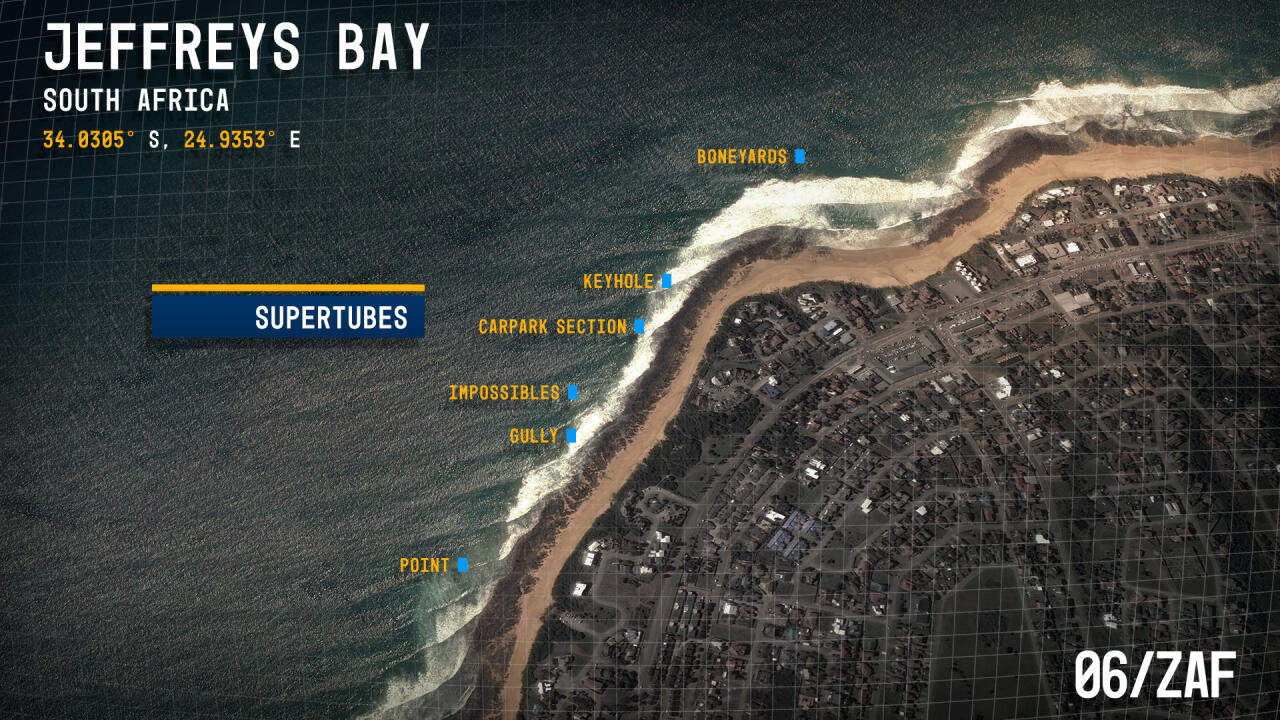 The many sections of Jeffreys Bay. - WSL

July is winter in South Africa and the weather gets icy, the wind starts blowing and the swell arrives to pour down the 340-meter section that is Supertubes. According to Tomson the wave breaks best on a southwest swell, but swell direction isn't the only element required for getting J-Bay at its best.

"I like a 20 to 25 knots strong, offshore wind," he said. "It magnifies the speed down the face and creates this incredible long run."

Tomson's Vintage J-Bay Style
0:36
The clip is an oldie, but the World Champ's style is timeless.

The speed at J-Bay is what makes the wave so technical and difficult to master. But when you find that perfect takeoff spot and drop into a bomb, it sets up a potential 300-meter wave. If you haven't been, it's a good idea to watch experts like Tomson tackle it first before heading out.

"I start at the top at the Boneyard section, a very fast, hollow section," said Tomson. "Then you can drop through to the main break at Supertubes where you get a super-fast, down-the-line wall. Then into Impossibles, where the really good tubes are. If you make it through the Impossibles section, then you can go all the way down to the point."

Two-time J-Bay champion Jordy Smith (ZAF) knows as well as Tomson what it takes to go head-to-head with Supertubes and come out on top.

"The beginning offers a little barrel, but then you have to get your speed up," said Smith, who won the event in 2010 and 2011. "The trick is matching the speed of the wave. You'll do a couple of turns and then you'll get this sucky section of reef with sand, and you'll get a good opportunity for a barrel. Then it'll run pretty fast, and you have a second to do a big floater or something."

Supertubes has always been known as a high-performance wave that requires a small board, but sometimes surfers opt for longer boards to help get into the wave while battling the wind coming up the face.

There is a clear keyhole that you can follow to paddle out on most days. It becomes a bit harder on spring low tides and larger swells, but it is the go-to access point to get out. If the swell has a bit more south in it, the takeoff spot will move further down the point. And should the swell be extremely west then the takeoff spot will allow you to move up the point toward Boneyards. The takeoff, however, isn't the trickiest part of mastering the break.

The focus is on the carve and the tube.

"The hardest part is getting the right line," said Tomson. "Some guys get completely confused and they change their drop about five times instead of just dropping to the bottom. I think when guys try and plan their wave out, they think ahead of themselves and become confused and repetitive. It is a wave that you can overthink, but the focus is on the carve and the tube."

Curren Masters Carve and Tube for 10
The three-time World Champ pulled out all the stops for a perfect score in the 2014 Heritage heat.

The wave has some clear sections, and the best surfers in the world know how to maximize every inch of it.

"The top section and the middle section are where you need to fit in your turns," Smith said. "The top section of the wave is the set-up for the hollow Car Park section, the best section for barrels. You can do a big turn, it's steep and it's closer to the judges area so they get a good look at it, and then it barrels."

Wave of a Lifetime

Along with the intricacies that come with surfing a highly technical wave like Jeffreys is the opportunity to experience the raw nature of the ocean at its finest.

"My best memory out there was a solid 8-foot day," Tomson said. "I'm the only one in the water and the sun's coming up, waiting for a wave, and about 300 dolphins come toward me. It was just amazing. And I swing around and there are maybe 100 dolphins with me, and then they disappear. I ride a wave and come through into the Impossibles [barrel] section.

"As the wave starts to dredge out, I'm way in the barrel, maybe 20 feet back, and these two dolphins jump out of the wave right in front of my face, five feet in front of me and jump through the wave and I get blasted by the spray and fly off."

Don't miss the Top 34, plus wildcards Dane Reynolds and Slade Prestwich, when they venture into the wild at the J-Bay Open starting July 8 LIVE here and on the WSL App.

1977 World Champion, Shaun Tomson delivers a full-on masterclass on Jeffreys Bay, plus Shaun breaks down all the matchups and his picks to