Today the event is on schedule for action for the round of 144.

The conditions at Kugenuma Beach this morning were 4 to 5 ft Find affected conditions with partly cloudy but fair weather.

Today WSL and event promoter called the surfers this morning 8 AM at the first call to get in 9:30 on for the opening rounds. First call tomorrow morning is 7 AM The event boasts a long waiting period of 7days to put the athletes in action only on the best conditions on offer.

Event venue Kugenuma Kaigan in Fujisawa-shi,Kanagawa-ken is located in the center of the Shonan area where the area is famed nation wide as a fine resort area centered with the famous Enoshima Island.

Last year 2014 Shonan Open attracted over 18000 fans to the event as the largest surf event in Japan and this year again to be held in the long weekend including the National Holiday, this year the event is expected to attract even more fans for the 2015 edition along with the conjunction events. The beaches opened nation wide on July 1st and means the summer season is here. Don't miss all the fun at the event. 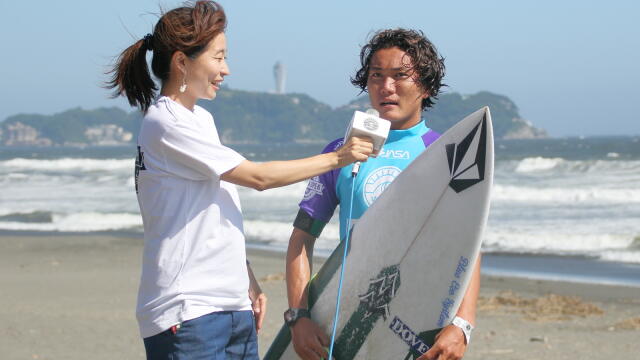 The QS1,500 events start the waiting period July 14th. Tuesday and on Saturday, July 19th the Longboard sinle fin masters and JPBA event by the finest body boarders will on stand by as a conjunction event.

The official status will be indicated via internet. Stay tuned to the topics or "Latest Topix" in the center of the WSL Japan web page!

http://www.wsljapantour.com/ as well as the WSL Japan Official Twitter Pages.

"MURASAKI SHONAN OPEN" 2014 edition boasts status with US$55,000- prize money on offer makes it the largest surfing event in Japan and attracts 120 of the finest surfers domestic as well as worldwide to the event.

MURASAKI SHONAN OPEN 2014 is proudly supported by the following sponsors: