I always liked purple. Since I can remember it has been my favorite color. There is something inspiring about it, and it comes as no surprise that it has always been associated with royalty. To have it signify big swells on the Doppler Radar Map just seems to make sense! Of course it wasn't always like this.

When I first started surfing, getting a ride to the beach was all we cared about and we rode whatever the ocean offered. I don't think anyone was predicting the surf in those days -- and if they were it was definitely not in color. We were just being exposed to color TV at the time. As I got better and learned more about the ocean I got pretty good at guessing what the conditions would be like at the beach I frequented regularly. I realized that the water's temperature movement from one direction to the other usually indicated a swell would follow. Winds and air temperatures were also huge indicators. 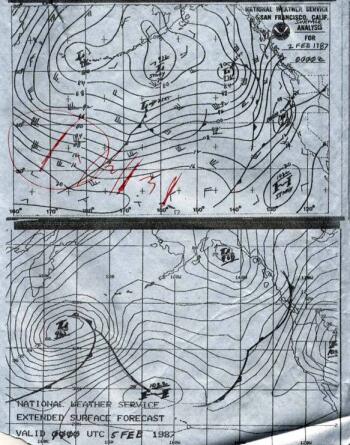 A 1987 government-provided forecast from the National Weather Service. The resulting swell prompted Tom Curren to visit Todos Santos and help put the big wave spot on the map. - WSL

More or less, with constant observation of all of the above, I could tell with reasonable accuracy what to expect surf-wise a few days in advance.

I didn't find it necessary to go much further with wave forecasting and I don't remember too many other attempts either until the 1990s when Surfline was born. You could sign up for a fax that would give you fairly accurate prediction on one sheet in black and white. I remember Surfline founder Sean Collins wanting to add an extra $2,000 to my budget for his forecasting services. At first I didn't feel we needed it. By then, the government was making animated swell charts available in color and I figured that was enough.

But there were no indications on those reports as to which degree the swell was approaching from, and that affects each break differently. Nor was I aware of the wave period, which is a huge factor in determining the size of the swell. At least I knew with some consistency that there was a swell coming and by the second year I was ready to pay for the Surfline report.

Those of us who attempt to forecast the arrival of large swells spend a good part of each day watching all forms of weather prediction and by far the most interesting are the animated charts that show the projected movement of swells across the oceans -- their starting points, the directions in which they move, and the build-up or decline of their energy. The colors of these spinning forms of energy indicate the intensity of a developing system starting with blue, then moving to green, yellow, orange, red and then -- you guessed it -- purple.

When I first started surfing, getting a ride to the beach was all we cared about and we rode whatever the ocean offered.

Sometimes on some very special journeys the color can go one step beyond purple to black, but that is almost end-of-the-world scary. We want purple, a big tight blob of the stuff, spinning unaltered across the ocean, any ocean, hitting land with full force. This is when we get the monster waves needed to run a Big Wave Tour event and it just doesn't happen enough. We want to see these athletes compete consistently at a variety of events around the world. Of course, if it was too common it wouldn't be as special, but I think we have a ways to go before tipping the scale. The minimum wave height requirement to run and event is 25-to-30 feet and the chart goes purple at 28 feet.

Everyone loves purple. It means we have a chance to run, the waiting may soon be over and the fun can begin once more. What is exciting for the Big Wave crew may not get the same response from the competitors on the Championship Tour (CT) who are looking for a strong swell -- but not so big the contest locations will be out of control. A purple-blob swell means a lot of fast-moving water and usually requires an offshore reef that can handle such power. The pointbreaks and beaches that provide the perfect CT conditions just don't look the same when the purple monster comes to town, and that's what sets the Big Wave Tour apart.

See what's next for the Big Wave Tour when second half of the season kicks off October 15.