"It was like France." It's a term has been used thousands of times at hundreds of beachbreaks around the world the best day of the year at any given spot. That's because France, and particularly Hossegor, sets the standard for the best beachbreak waves in the world.

Trailer: Joie de Surf
1:00
Elegance, charm and those cafe au laits meet the raw power of the Atlantic for the Roxy and Quiksilver Pro France.

The South of France was the first part of Europe to develop its own waveriding scene, a mix of European aesthetic and global surf culture. And the French proved to have talent, too: Mikael Picon, who was among the first European surfer to join the Championship Tour (CT), and Didier Piter, a French standout who now coaches top Qualifying Series (QS) surfers, have both helped to put France on the map. Joan Duru, of Bayonne, France, is close to qualifying for the CT this year, while Marc Lacomare (FRA) has been a force on the QS for years. Pauline Ado, also of Bayonne, has been a regular on the women's Championship Tour for the past five years and Johanne Defay is a rising CT star.

Defay Defies Odds for 9.63
1:31
Johanne Defay earned the Rookie of the Year award in 2014 and won her first CT event at the Vans US Open this season. She recently earned one of the highest scores of the event at the Cascais Women's Pro.

And of course, Jeremy Flores, who grew up in Reunion Island and has always surfed for France, was named the Championship Tour's Rookie of the Year in 2007, in addition to winning the Pipe Masters and this year's Billabong Pro Tahiti. Moreover, France has hosted the Quiksilver Pro event for 15 consecutive years, a feather that few Tour stops have in their own hats. This year the women's Roxy Pro will again run in tandem with the men's event. France has not only seen the rise of its homegrown talent, but the migration of world-class surfers from other places, too. Tom Curren (USA) was one of the early adopters. "They have a unique way of doing everything [in the region of Landes], which is the case for all the regions of France," Curren said. The Californian, who won World Titles in 1985, '86, and '90, moved to Anglet for years. "I like the food, of course. And the Adour River to the south is pretty much the start of Basque Country, which is a completely different culture. Which region has better waves is debatable." 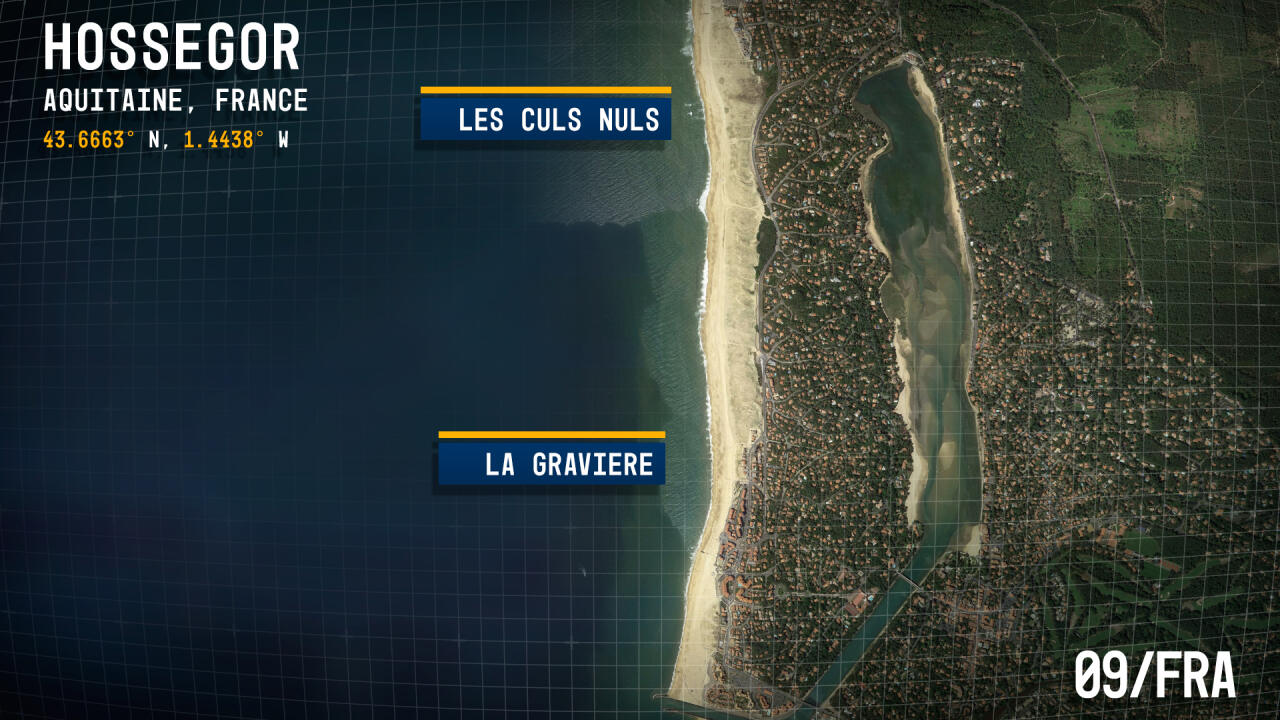 Hossegor's setup is a simple beachbreak. But then again, it's not so simple. What is it that makes this stretch of sand different from other generic beaches around the world? Well, for one thing, there's a lot of swell. The seas of the North Atlantic are storied waters, feared by mariners for their violent storms. And while its European neighbors to the north take the brunt of these maelstroms, France often sits far enough from the storm tracks to get the swell without the wind and weather.

"Any swell from west or northwest is fine," Curren added. "There's a deep trench offshore that helps gather the swell too."

He explained that pretty much any bit of energy that gets into the wide gap between the southern tip of Ireland and that western jut of Spain comes funneling into the Bay of Biscay. The offshore trench has an appendage that points right at Hossegor. That's not to say that storms don't occasionally blow in, but they are more common in the winter months.

There are plenty of sand-bottom breaks around the world that are on the receiving end of the swell train. However, the quality of the wave has everything to do with the quality of the sandbank. Hossegor owes its fame to the actual grains setting up those sandbanks (or sandbars).

"The sand here is optimum size for redistribution," Curren said. "It's not like some super-fine sand that sets up more like concrete. I think that's why these are some of the greatest beachbreaks you can find anywhere in the world."

There are several streams and other waterways that flow toward the beach and help move sand around. The formation of that sand creates those defined peaks. And how much swell it can hold before maxing out has to do with how that sand is set up. In the past, that has meant hair-raising, overhead barrels at the Quiksilver Pro.

Slater, Tubed in France
0:42
In Round 5 of last year's Quiksilver Pro France, Kelly Slater found a wave with size that held up at Hossegor.

"Actually, if the sand is good, it can hold good size," Curren continued. "The main winter spot, La Nord, can hold a lot of size with offshore winds. Wave period is another factor. Then there's the tide swing."

Insider Tip: Knowing the tides in Landes is of utmost importance. Sitting at about 44-degrees north, it is the furthest Championship Tour stop from the equator by a full six degrees, which means that tidal swings are more extreme here than anywhere else on Tour.

With those pulsing pits, ramps, and open faces just looking to be carved, the Quiksilver Pro France is a true test of a surfer's versatility. Hawaiian John John Florence (HAW) looks to defend his 2014 title, but only the most well-rounded surfers can take victory here. Most past winners, in fact, have one or more World Titles. Joel Parkinson (AUS) won in 2006 and Kelly Slater (USA) won in 2012 en route to his 11th World Title. Mick Fanning (AUS) has won it four times and the late Andy Irons took three victories in France.

Florence Finds Open Face
John John Florence finds a clean face to work with for a 9.00 during the Quarterfinals in 2014.

In a schedule switch, the Quiksilver Pro and Roxy Pro France will be run together this year. The women's event has traditionally run in a separate waiting period, but the date will mean the ladies can challenge themselves in the kegs as well. That kind of potential power means that defending event champ and aggressive charger Tyler Wright (AUS) in a very good position to repeat.

France is an ever-important stop on the men's Tour because it often defines the Title Race.

Much like the athletes, boards have to be versatile, big enough to paddle into heaving peaks, but loose enough to go to town on open faces. Most surfers wind up riding boards in the 5'10 to 6-foot range. Florence's win last year came on a 6'1 Pyzel Bastard model. Most surfers opt for squash tails with added rocker to handle the juice in France.

Bottom line: When Hossegor is doing its thing, it's on. And that can mean a party of turns and airs or a festival of barrels.

And as for Curren? "I prefer the barrel-fest."