HIC Highlights: Day 1
2:44
QS surfers lit up Sunset Beach on Day 1 of the local qualifying event for the Vans Triple Crown of Surfing.

Australia's Jack Robinson, 18, was nothing short of perfect in powerful, triple overhead surf today at the HIC Pro, Presented by Vans. In the second-to-last heat of a day that had otherwise been dominated by local Hawaii surfers, Robinson fired off two huge snaps for a near-perfect 9.6 ride, then followed up with a pair of barrels that earned a perfect 10. His final scoreline was the highest of the day: 19.6 points out of 20.

Robinson has been hungry for bigger waves in competition this year, and his dreams came true today. Working with local North Shore shaper Eric Arakawa is a definite plus, providing him with specific equipment for powerful, big surf. When it comes to surfboards, the power of Sunset Beach demands very uniquely designed equipment.

"There's waves and hopefully the swell sticks around so I can showcase it!" said Robinson. "There have been a lot of small wave comps and I haven't done that well this year."

The top local performance came from defending HIC Pro champion Danny Fuller (HAW) in Round 1, where he posted a two-wave total of 16.0. Unfortunately, he was bundled out in Round 2 later in the day.

As the official local qualifier for the Vans Triple Crown of Surfing, the HIC Pro provides a platform for Hawaii athletes to compete for points and prize money, but more importantly a place in the world's most prestigious surfing series. 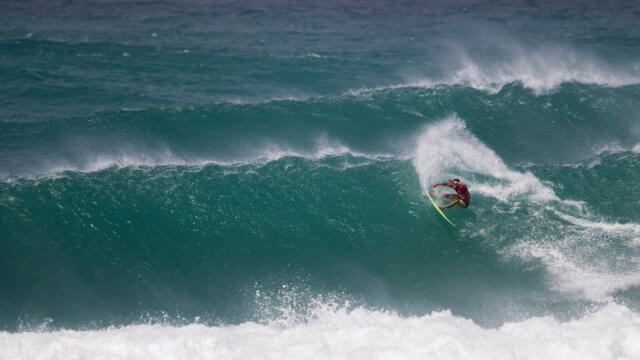 Kemper wowed the beach crowd with an aggressive off the lip attack, garnering a 9.0, which was one of the highest single-wave scores of the event. Winning the HIC Pro back in 2010, Kemper has grown up competing at Sunset and felt confident on his board in today's waves.

"It's such a big playing field," he said. "It's you against the ocean, and I just wanted to have fun and feel my boards out and start the winter off right.

"I felt comfortable. I surf out here a lot and put a lot of time in the North Shore. I've been living over here since I was eight and bouncing back from Maui."

Irons, at 35, showed expert knowledge in wave selection and positioning to advance, riding a surfboard that carried the iconic design of his late brother Andy. 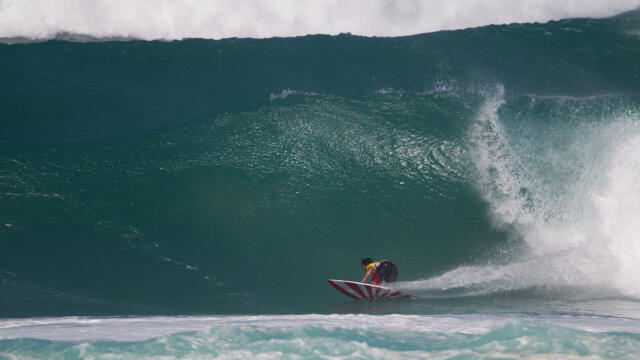 "It's not easy, Sunset. It's victory at sea," said Irons. "My strategy is to catch waves and not sit. I figure if I ride waves I can win the heat."

"This contest always has crazy competition," Irons continued. "I remember being one of those young 14-year-old kids surfing against Johnny-Boy [Gomes] and Occy [Mark Occhilupo]. It's a mix of everybody and the kids are the ones you have to worry about, cause the stuff they can do... there's no limit. I like watching them."

The contest is looking to resume Thursday October 29, at 8 a.m. local time. According to Surfline, the waves will be in the head-high range as the NNW swell drops off. A solid WNW swell is expected to build in through the day with lighter trade winds.