HIC Pro Highlights: Day 2
2:52
Catch the highlights from Day 2 of competition at the QS 3,000 at Sunset Beach.

Known to excel in waves of consequence, 32-year-old Walsh is a threat at any Qualifying Series (QS) event held at big wave breaks, especially here on the North Shore of Oahu. The Maui surfer won the HIC Pro title 10 years ago and his competitive savvy and wave knowledge has seen him advance throughout the decade.

Walsh threw down the biggest single-wave score of the day, an 8.67, on a bumpy but expansive wall that lined up perfectly for a few fluid carves. Drawing out huge turns across the wave face, Walsh displayed excellent control throughout the heat.

"I was a lot more patient on the first bottom turn to get a crisp first turn rather than try to rush it up there to be able to have two maneuvers or three maneuvers," he said.

With one eye on Pe'ahi, Maui's infamous big wave venue, Walsh flew to Oahu just a day before competition began and was excited to see a great forecast for the HIC Pro.

"I like Sunset when it's not small, that's for sure," said Walsh. "I think it's challenging, though, because it's an in-between size still. This new swell hasn't kicked in and the big swell we had yesterday has really subsided, so I think a big part of it is just trying to be in the right place and positioning yourself to give yourself the most opportunity."

"If I'm in a contest I want to win," he continued. "If I wake up in the morning and I'm going to put a jersey on, I want to win the event. That's pretty much the only drive that I need." 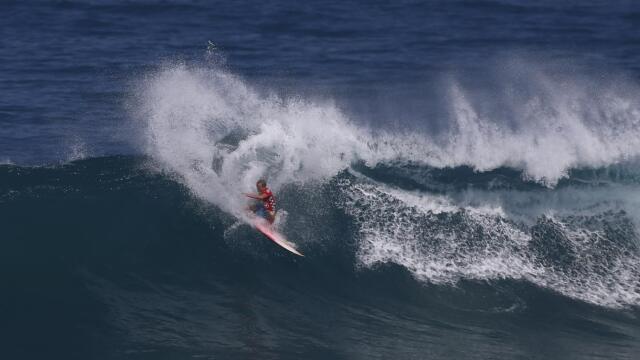 Jamie O'Brien (HAW) nabbed an excellent-range score early in the day, an 8.33, to advance into Round 3 as well.

"I wasn't sure in the beginning of the heat, I kind of took it easy," said O'Brien. "The guys were already in the lineup, but luckily I got in a nice little rhythm. I just told myself, 'don't surf 100 percent but just surf solid.' That was my plan of attack."

O'Brien isn't a regular competitor, but when the North Shore comes alive, the 32-year-old is usually vying for a slot in the most prestigious surfing series of all, the Vans Triple Crown.

"I love competing in Haleiwa, probably my second favorite wave in the world," continued O'Brien. "And Pipeline is definitely a great event, I'd be stoked to surf the Vans World Cup out here as well." 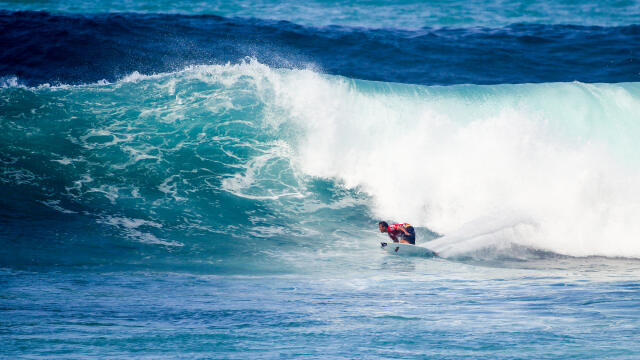 Chris Ward (USA) used veteran knowledge in the rising Sunset conditions, whipping three turns off an 8-foot wave to score an 8.50 and advancement into the next round. The 36-year-old San Clemente native traveled with the Championship Tour for three years, finishing off each year at the hallowed 7-Mile Miracle.

"I just went out there with confidence, knowing that I was going to get a good bomb," said Ward. "This is just a starting point for me. It's going to be a good El Nino year, there's going to be a lot of good surf so I'm just trying out my big boards and trying to get used to it for when it's really big."

The HIC Pro is anticipating a monster day of West Bowl peaks that could see wave-face heights reach 30 feet. A call will be made at 7:30 a.m. for what could be the final day of the event.