Toledo's Perfect Score in Portugal
1:18
As far back as 2015, Filipe Toledo had progressive, consistent airs in his Championship Tour arsenal.

After an early defeat at the Quiksilver Pro France, airman extraordinaire Filipe Toledo (BRA) went directly Portugal to prepare for the next contest, the Moche Rip Curl Pro. Toledo's prep work -- both in the water and out -- served him well. He bounced back from his poor result to take the win in Peniche (home of the event).

So what was he riding all the way to his win? His shaper, Marcio Zouvi, offered insight on what helped Toledo punt to perfection in Portugal. Toledo is the youngest surfer currently on the Championship Tour and now heads into the final event of the season, the Billabong Pipe Masters, as No. 2 in the world, with a serious shot at claiming his first World Title. But he has serious competition to get there: With Mick Fanning (AUS) in front and Adriano de Souza (BRA) and Gabriel Medina (BRA) right on his heels, Toledo will be looking for another magic carpet to earn a big result at Pipe.

See what Toledo needs to win the World Title. 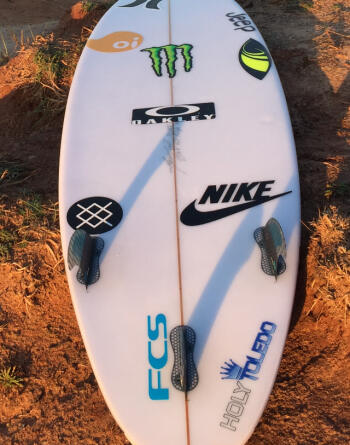 World Surf League: Europe can offer a huge range of conditions, which calls for a range of boards. What else was in Filipe's quiver when he headed over there? What types of conditions would each board would have been suited for?
Marcio Zouvi: He took two big bags with more than 10 boards total. He had 5'9"s and 5'9.5" squashes and round tails. Holy Toledo models for the average beachbreak conditions and some 5'9.5" round tail OK models for the clean barreling conditions. He also had some step-ups just in case the French beachbreaks got out of control.

Toledo: Experience On-Point in Peniche
1:06
Filipe Toledo backed up a 9.23 tube ride with an enormous air for a 9.77 less than three minutes into his Round 4 heat.

WSL: Filipe has dominated in most of the progressive beachbreaks this year, he's won three of them. What do you think he has changed to reach this level this year?
Zouvi: Confidence. He's getting more experience and he's really enjoying every moment on the tour. He's having fun. 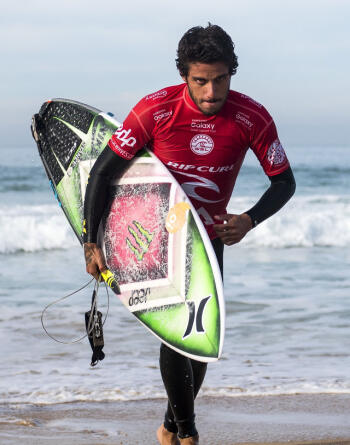 Toledo's determination was visible throughout the event. - WSL

WSL: Heading into the Pipe Masters, what types of boards will he be turning to? What makes the dimensions/models good for a wave like Pipe?
Zouvi: He is taking boards for Pipe from 5'10"s to 6'6"s, all are round pins. We've copied his 6'3" from last year and created all the other ones from that design. They are all heavier and have more volume than his regular shortboards. We had a very positive feedback from him on the Semi-Gun model and we'll stick to it.

WSL: He's done well in the beachbreaks, but Pipe is all about the barrels. What advice would you give him on earning a World Title at Pipe?
Zouvi:I think he needs to go to Pipe not with the Title in mind but to surf one of the best waves in the planet with [only] one more guy in the water. Last year he really enjoyed Backdoor [the righthand wave that peels off of Pipeline]. If he can focus on that, we may have a surprise in December.

Don't miss Toledo and the other Title contenders battle for all the glory at the final stop of the season, the Billabong Pipe Masters LIVE on the World Surf League website and the WSL App beginning December 8.