Bethany Hamilton and Brad Domke were two notable standouts among the crowd stepping up to the massive challenge of Pe'ahi on Monday, as a fresh El Niño-generated swell pounded the North Shore of Maui.

For Hamilton, who lost her left arm in a shark attack back in 2003, today was her latest installment of inspiration, as her refusal to acknowledge any barriers caused by her injury continues. While her inspirational tale has already made it to the big screen, award-winning director Aaron Lieber has another project in the works. The new film about Hamilton is called Surfs Like a Girl, and we're sure to be seeing plenty more of it in the future. Hamilton was all smiles after conquering waves like this one. Photo: Aaron Lieber - WSL

Hamilton is back pushing her limits just seven months after giving birth to her son, Tobias Dirks. Monday was the first day Tobias had anyone other than family babysitting him. Bethany's husband Adam Dirks and father Tom Hamilton were in the channel watching from the back of the filming boat.

While this wasn't Hamilton's first session at Jaws, it was undoubtedly her best. During her first attempt at the age of 18 she only caught one wave. Today she caught a handful of great rides and was getting a lot of support from the tight-knit tribe of surfers, windsurfers, standup paddlers, kiteboarders and even one skimboarder who gathered in the lineup Monday.

"You don't need to look too far for inspiration when you see what she's doing day after day," said big-wave star Ian Walsh, who was in the lineup along with Shane Dorian, Billy Kemper, Robby Naish and a number of other legends.

Meanwhile the world's best (and arguably only) big-wave skimboarder, Brad Domke, took his fins-free, rail-free, high-wire act to Jaws for the first time on his 4-foot long Exile skimboard. How he managed to slice his way through Pe`ahi's notorious speed bumps and set an edge remains a mystery, but he continues to stretch the boundaries of hydrodynamics. On one of his three rides he was nearly faded into the pit by a windsurfer who belatedly swept in just as things were getting dicey. 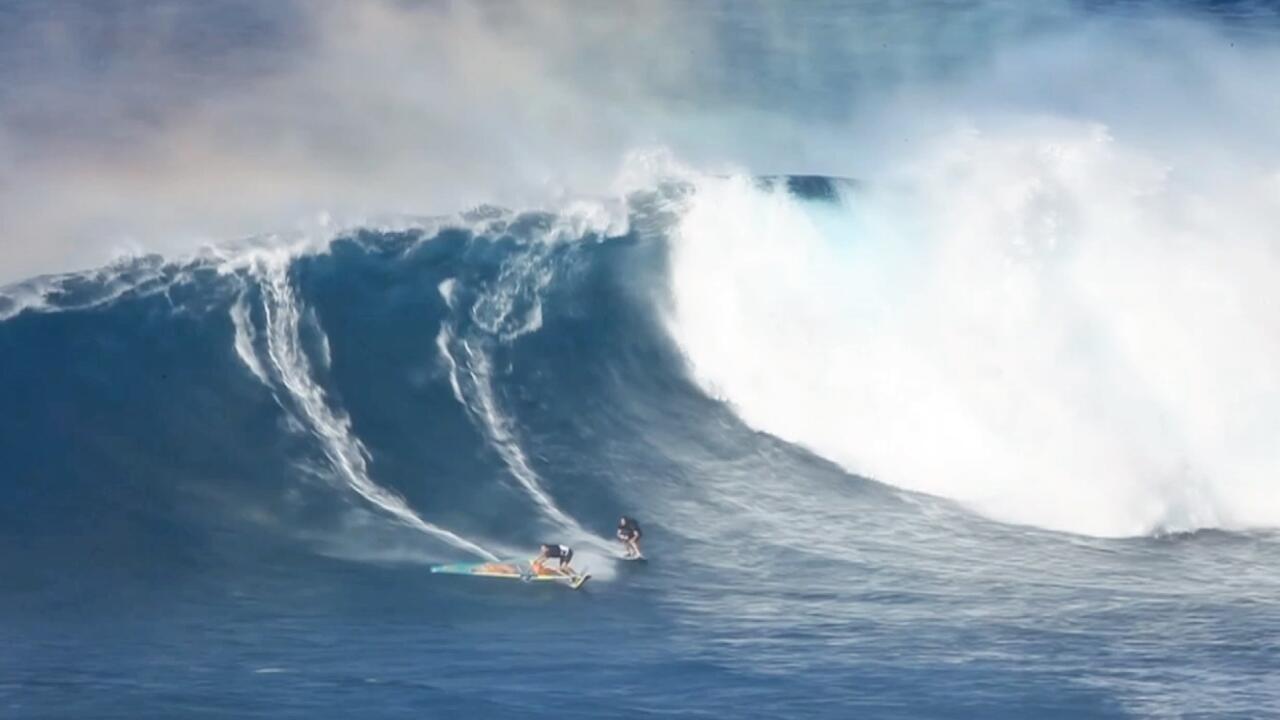 Brad Domke (behind) gets ready to set the blade edge of his 4-foot Exile skimboard at Pe`ahi. Photo: Shannon Reporting @shannonreporting - WSL

"I didn't really mind when he rolled up on me," Domke said via phone from Maui. "I was just stoked to ride another sick wave at one of the craziest spots I've ever seen. The ones that go unridden here are the freakiest things ever," he added.

So what's next for Domke after handling Jaws?

"Well, we're thinking about chasing this swell to Oregon, then maybe doing a little snowboarding afterward," he explained. "I've never seen snow in my life."

Chances are the slopes will never be the same if he makes the trek.

Special thanks to Shelby Stanger for assisting from Maui.