Another action packed day at Maroubra Beach saw the Carve Pro continue with two-to-three foot bumpy waves on offer for competitors. Unfavourable winds didn't detract from the action with Round 2 of the women's now complete and the men's division making it halfway through Round 4.

Round 2 of the women's provided an exciting start with Philippa Anderson (AUS) attaining a good lead early in Heat 1. Needing a 5.50 to take the lead, Kobie Enright (AUS) took off on a number of waves in the final minutes but was unable to convert. A second for Enright means she will still progress with Anderson into Round 3.

"I have surfed a lot of heats in tough conditions," Anderson said. "I just like to keep busy because any wave that looks bad could open up and offer you a few turns. I knew if I could better my 5.00 I'd be in a good position. I'm really happy to make a couple of heats and get the ball rolling at the beginning of the year and settle the nerves a bit."

Although she took a while to get going, Macy Callaghan (AUS) put on the most dominating performance of the Carve Pro thus far posting a near-perfect 9.90 and an excellent 8.00. Callaghan displayed great wave selection and was able to jag a number of stylish turns to earn her these two excellent scores.

"I'm so stoked," Callaghan said. "My first few waves weren't that great so I was beginning to get a bit nervous, then when I took off on my 9.90 I knew it was going to be a big score, but wasn't sure it'd be that big. After that was locked in I could just enjoy myself." 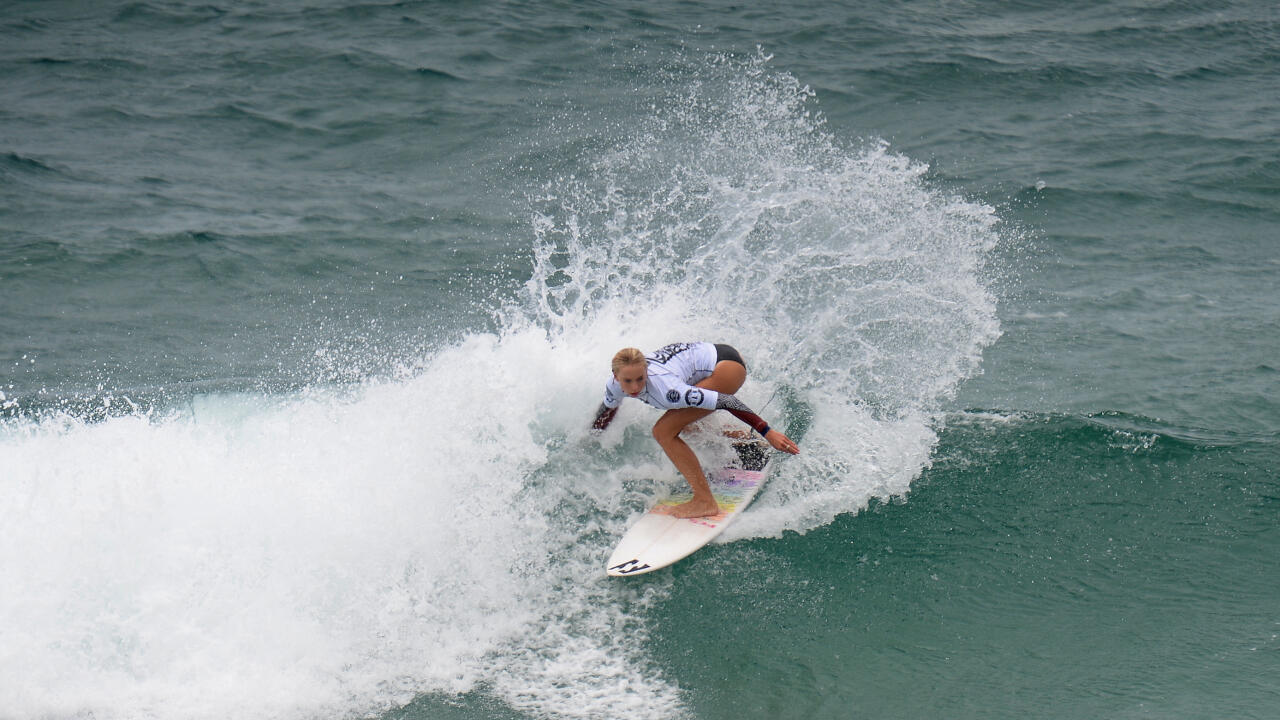 In what was an absolute nail-biter of a heat, Sophie Bernard (AUS) held a commanding lead with a solid heat total of 16.00. Needing an excellent score of 8.76 with only 10 seconds left, Skye Burges (AUS) took off on a set wave and performed two extremely critical turns and was rewarded a near perfect 9.50 to win the heat.

"I haven't done a contest in ages," Burgess said. "I was just enjoying being out there and surfing a heat, I was comfortably making it through so I wasn't to stressed about getting the score on that last one. Turns out it gave me a couple of sections and I got 9.50 so I'm really happy."

For the second day in a row, former WSL CT competitor and Maroubra local Blake Thornton used his knowledge of the banks and tricky conditions to post the highest single wave score of the round a 9.00 (out of a possible 10). Thornton's powerful backhand hacks and rail surfing impressed the judges.

"Knowing what your looking for makes a big difference," Thornton said. "The banks haven't changed much the last couple of weeks and I've been out here a lot which definitely helps in conditions like this. There is no point in me going for the smaller ones especially against these younger lighter guys so I was just patient and waited for the sets. I finally got one that I can lay into a bit and managed the 9 which is great."

Connor O'Leary (AUS), engaged in a fierce battle with fellow Cronulla surfers Joe Sear (AUS) and Harrison Martin (AUS) in Men's Round 2 as all surfers attempted to book themselves one of two positions into Round 3. With a strong southerly wind on offer, O'Leary opted to resort to aerial maneuvers on the lefthanders, while Sear picked the eyes out of the longer righthand walls. All surfers managed to post a series of respectable scores, however Sear got the nod thanks to one wave, which allowed for a barrage of mammoth backside hits rewarding him with an 8.15.

"It felt like an Elouera Boardriders heat out there," said O'Leary. "I knew Joey (Sear) was absolutely lethal on his backhand on the right-handers, which is why I opted to stick to the lefts and use my forehand. It was actually a really hard heat to surf with all three of us surfing for the same Boardriders club, but we all wanted to get the spots into the next round. I'm stoked to have got one of them." In the second last heat of the day, top seed Stuart Kennedy (AUS) stamped his authority on the competition, displaying his entire repertoire of maneuvers with strong powerful rail surfing earning him some early scores. Kennedy seemed to relax later in the heat, pulling an amazing grab rail reverse on a critical section, which earned him a near perfect 9.50.

I felt a lot better in that heat than I did in the morning," Kennedy said. "I'm having a great time here hanging with all the Carve guy's and not taking it too seriously. Staying relaxed and enjoying myself seems to be working so hopefully I can make a few more heats."

Day 3 action at the Carve Pro Maroubra is set to kick-off at 7 a.m. AEDST and can be seen on the live webcast at www.worldsurfleague.com or on the WSL App.

Maroubra to play host to some of the world's best when Carve Pro gets underway this week.