Whales dotted the horizon as surfers weaved through playful 4-to-6ft plus waves during day one of the Sunset Pro, a World Surf League (WSL) men's Qualifying Series (QS) 1,000 event. Regional favorites Danny Fuller (Kauai), Mason Ho (Oahu), Jamie O'Brien (Oahu) and Sunset Pro defending champion Hank Gaskell (Maui) saw success in the tricky conditions, while Rainos Hayes (Oahu) was the only surfer to advance into the Round of 64 after competing as an alternate in the first round. 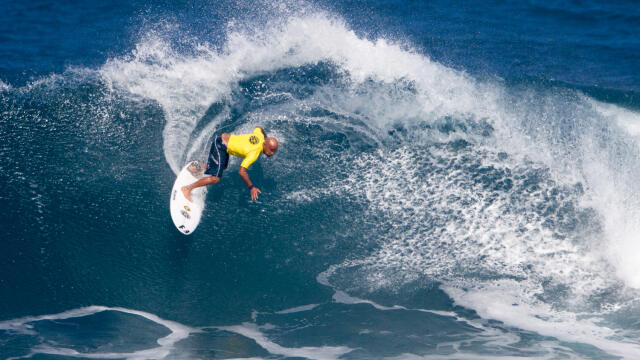 Hayes is a surf coach and mentor for Billabong and works closely with the up-and-coming juniors of Hawaii. The 46-year-old talked about the talent here today: Ulualoha Napeahi (HAW), 19, had one of the highest combined scores of the day, a 14.50, in his heat against Cody Young (HAW), Jason Shibata (HAW), and Edrick Baldwin (HAW). The Big Island athlete will surf on day two of the competition.

Young also advanced and is one of the youngest competitors in the Sunset Pro. At 16, the Maui athlete looks forward to the next day of competition.

"We've had a bunch of big days for this contest where it was just too big to run, and with the forecast being as big as it is, I'm a little bit nervous," said Young. "But I have big boards so I'm ready if it comes down to it." Cody is looking to get a slot into the upcoming Volcom Pipe Pro, whose holding period begins this Thursday.

"I was a couple spots off in the regional rating, and I think it's the next two remaining people in the region that do the best in this contest who get a seed in the Volcom Pipe Pro," said Young. "I'm just trying to make as many heats as I can and try to get into that contest."

Sunset standout and 2014 HIC Pro champion Danny Fuller (HAW) posted the second highest single wave score of the day behind Brazil's Victor Bernardo (8.90) - an 8.75 for a few solid turns on a set wave. With a decreasing swell however, the lineup proved difficult to read and surfers found themselves scratching for scores. "The conditions are absolutely beautiful, but we have a dropping swell so it's kind of going in between the outside and the inside," said Fuller. "A lot of guys are getting lost and not really getting good scores, so I just got really lucky and got a few good waves and I'm stoked."

Official event forecaster, Surfline.com predicts head-high surf for Saturday as the old NW swell drops and a new WNW swell moves in for the late afternoon. The surf builds for Sunday and Monday as the new swell fills in, which could see waves up to 25 feet pound the North Shore. As a notorious big wave venue, Sunset Beach is known to handle large surf and adds to the excitement for beach spectators and challenge for competitors.

Contest officials will determine by 7am tomorrow morning if the Sunset Pro will resume for the final day of competition.

As the final men's QS of the season comes to a close, Ross Williams breaks down who needs what to make the Dream Tour.

The 20-year-old took down a veteran field of finalists in the Sunset Pro.