The morning began with an opening ceremony to welcome surfers, which included live music and dancing, a mixing of ocean waters, and traditional monoi (coconut and tiare oil) making. The mayor of Papara, Putai Taae, spoke on behalf of the council.

"Our wish is that the waves will be good and that you all enjoy your time here in Papara," said Taae. 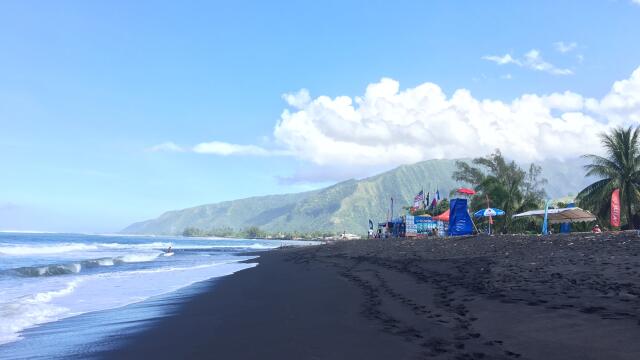 The vibrant Tahitian backdrop added color to head high surf and light variable winds, which made for a successful completion of Round 1 for both the men and women's competition.

A men's trials heat was first in the water to determine two additional slots in the main event. Noah Hill (USA) and Maxime Ratia (PYF) were able to advance ahead of a strong 5-man field including Mauna Reveil (PYF), Kona Oliveira (HAW) and Manuarii Laux (PYF). Ratia missed out in Round 1 while Hill advanced into the Quarterfinals.

The contest then switched gears to begin the Vahine Pro Junior, which saw former WSL World Junior Champion and 2x ISA Gold Medalist Mahina Maeda (HAW) storm through Heat 1 against Luana Silva Coelho (HAW) and Savanna Stone (HAW). Maeda looked strong on her backhand, hitting the lip with a variety of turns to take down competitors. An 8.25 and 6.50 saw the Sunset Beach, Oahu native secure a Quarterfinal spot along with Silva-Coelho.

Eleven-year-old Silva Coelho is the youngest competitor of the event, but impressed judges with her finesse in the water. The North Shore, Oahu wahine talked about going up against Maeda, saying it's scary and exciting at the same time but really fun. In regards to her expectations for the event, ‘Lulu' said: "I am hoping to achieve a good finish and a good start to a good year." Fellow Hawaii athletes Zoe McDougall (Oahu) and Summer Macedo (Maui) moved on by taking out two local competitors and further narrowing the contest down to an almost entirely Hawaii field.

Brisa Hennessy (HAW) nailed a 9.35 for three explosive turns in a row, each one tight in the pocket to demonstrate control and focus. The Oahu local set the bar high for the girls today, and advanced into the Quarterfinals ahead of Vahine Fierro (PYF). Brisa goes vertical for an excellent score, a 9.35. - WSL

"The conditions are perfect right now, there's no wind and it's pretty open," said Hennessy, 16. "I got really lucky with that one, it came straight to me and gave me three turns which is really nice and I was really happy about that." Leila advances in first from Round 1. - WSL

The final heat of Round 1 of the Vahine Pro Junior saw a mix of contenders - Leila Riccobuano (HAW), Dax McGill (HAW) and Ynes Balcon-Mouzaoui (PYF). Riccobuano,12, advanced through ahead of McGill, 18, a seasoned competitor who is currently surfing her final year on the Pro Junior tour. Finn, fresh off a runner up finish at the Rangiroa Open Pro. - WSL

The first heat of the Papara Junior Pro Men's saw Rangiroa runner up finisher Finn McGill (HAW) tap into his small wave skill to post an 8.25 and 6.00 - less than one point ahead of fellow competitor Taichi Wakita (JPN). McGill's smooth style cut through the waves with ease, while Wakita played catch up to keep Maxime Ratia (PYF) and Christopher Bluthardt (HAW) at bay. Cody finds the score he needs on his backhand. - WSL

Cody Young (HAW) also saw success into the Quarterfinals after showing off strong technique in the playful waves. With a combined score of 14.75, Young moved on ahead of Eliott Napia (PYF) and took down heat competitors Pono Auld (HAW) and Warren Peckett (PYF).

Heat 3 saw Tahitian standout Mauriki Raioha take an early lead with a 6.50 on his opening wave, then worked the ramps to back that up with a 7.50 for a total combined score of 14.00. Fellow Tahitian Manarii Varuamana made it through to Quarterfinals as well, staying busy in the consistent surf and posting a combined 12.00. In the closest heat of the day, Noa Mizuno (HAW) went up against trials winner Noah Hill (USA), Logan Bediamol (HAW) and Kelson Lau (HAW) and kept his momentum up throughout the 20-minute heat. Mizuno and Hill landed the only two airs of the day, which saw them both advance into the Quarterfinals.

Contest organizers will convene tomorrow morning at 7:00am HST to assess conditions for a possible start on the Papara Open Pro, a WSL QS1,000 men's event. The juniors are expected to resume on Wednesday, March 16 and crown winners in the afternoon, while the pro men will likely get a start in the morning.