Finn stands by after dancing at the opening ceremony. - WSL

After a few days of firing surf at Avatoru for the Rangiroa Open Pro, where Hawaii's Kai Mana Henry was victorious, the focus now shifts to a rampy beach break for the Papara Pro Surf Tahiti. Located on the main island of French Polynesia, Papara plays host to a three-day surf festival, which includes a World Surf League (WSL) Men's Qualifying Series (QS) 1,000 and a Men and Women's Junior Pro (JP) 1,000.

Finn McGill (HAW), runner up at the recent Rangiroa Open Pro, has his sights set on making a lasting impression here in Tahiti. 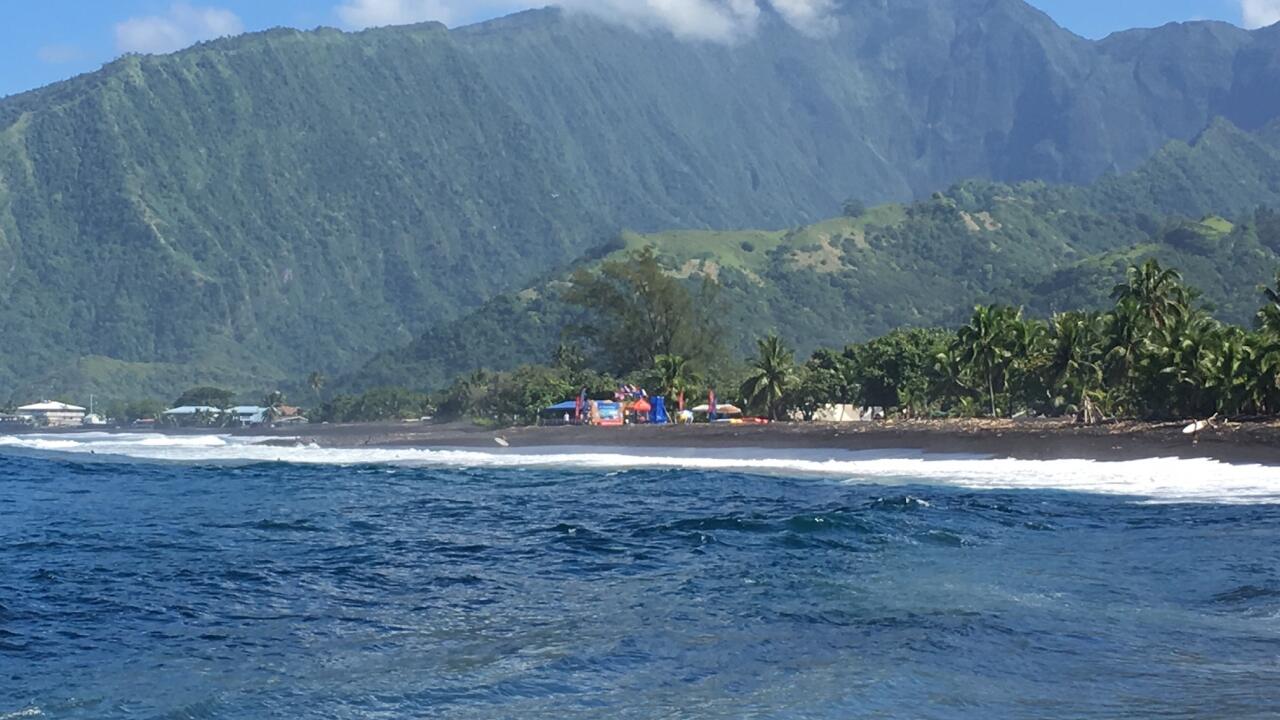 "There are so many talented juniors here from Tahiti and Hawaii, that I'm just looking to do my best," said McGill. "I'm going to take it one heat at a time and have fun. The wave at Papara is so different from Rangiroa. Hopefully I won't lose as much skin as I did last week."

The event holding period is from March 13 - 18, and competition for the juniors kicked off on Day 1 of the contest window at 12:30 p.m. HST. Bert Ishimaru and the Tahitian Surfing Federation representative come together to mix the waters of Hawaii and Tahiti. - WSL

The black sand beach of Papara provides a unique atmosphere for the competition and has been a popular surfing destination for many years. The Federation Tahitienne de Surf (Tahitian Surfing Federation) and WSL have now coupled to offer four valuable contests for regional surfers in the Hawaii/Tahiti Nui region, including the Rangiroa Open Pro, Papara Open Pro, Papara Junior Pro and Vahine Junior Pro.

"The merging of the two regions is significant and important because it's giving local surfers from both Hawaii and Tahiti the advantage to be able to compete in waves that suit their surfing style," said WSL Hawaii Tour Manager Bert Ishimaru.

"Being able to get more surfers together to compete against each other is going to help raise the level of surfing within the region. More importantly, having competitions here in Tahiti is helping to balance our regional tour location-wise." With the Rangiroa Open Pro completed, surfers will now hunt for points in the punchy beach break of Papara, a totally different venue than the reef pass of Rangiroa.

"Rangiroa was a challenging and technical wave and the Hawaii athletes that had that type of skill did really well," continued Ishimaru. "Now we're going into Papara and it requires a different type of skill level. It will be interesting to see the level of competition for this event.

Junior defending champion O'Neill Massin (PYF) will return to Papara for a chance at 1,000 points, prize money and the Vans travel scholarship award, which will go out to the top placing Tahitian from each event. $10,000 was donated to the Federation Tahitienne de Surf to help local Tahitian surfers travel to Hawaii to compete in more events within the region.