Hawaii has welcomed a partnership with Tahiti Nui for a new region that combines the two Pacific archipelagos within the World Surf League (WSL) - now known as the Hawaii/Tahiti Nui region. An exciting addition for local surfers, Tahiti offers two Qualifying Series (QS) 1,000 events plus a Junior Pro (JP) 1,000 for both men and women. The Rangiroa Open Pro takes place March 8 - 11 and the Papara Pro Surf Tahiti is March 13 - 18. Thirty-six out of the 75 confirmed athletes for Rangiroa are traveling from the Hawaiian Islands - nearly 50 percent of the field - with Maui favorites Billy Kemper and Ian Walsh part of the competition, as well as Danny Fuller (Kauai) and up-and-coming juniors Finn McGill (Oahu), Cody Young (Maui) and Christopher Bluthardt (Oahu). 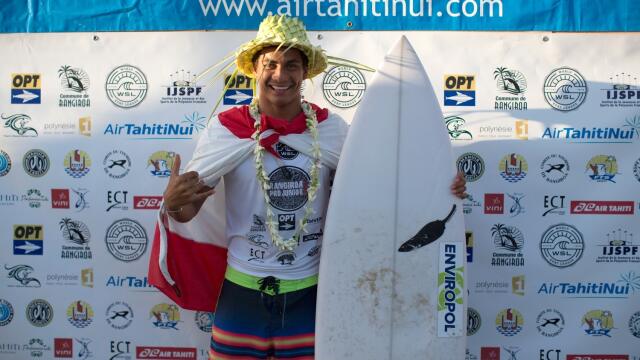 Thirty-three percent of the field is competing on home turf, including Papeete standout Mihimana Braye who will be defending his title at Rangiroa. Teahupoo extraordinaire and Tahitian threat Taumata Puhetini will also be returning to Papara with hopes of claiming a second consecutive title.

Other countries participating in both events include Peru, Australia, Guadeloupe, USA, South Africa and France, with Gatien Delahaye (GLP) and Diego Mignot (FRA) acting as sole representatives of their respective nations. Only 14 of the 75 athletes at Rangiroa are competing outside of the Hawaii/Tahiti Nui region. The addition of Tahiti to the Hawaii region is largely beneficial for local surfers who now have greater opportunities to gain valuable regional ratings points to qualify for the coveted WSL Championship Tour.

Equally important is the cultural exchange between the two island nations and the unique experience that is offered to athletes. Surfers have the chance to engage in a new culture, enjoy different foods, learn about the environment and new methods of sustainability, and ultimately gain an education in an immersed way.

The Hawaii region is known to churn out top-notch athletes, from Andy Irons to John John Florence. But who comprise the next generation of