Filipe Toledo knows what it's like to get repaired in a hurry. In Brazil he'll be returning to competition for the first time since the Gold Coast. - WSL / Kelly Cestari

The amount of labor involved in staging and broadcasting a Championship Tour event can be mind-blowing. While stadium sports go on with the flip of a switch, at modern, high-end surf venues everything is built from scratch, from trenches to towers...at every single stop, every time an event runs. 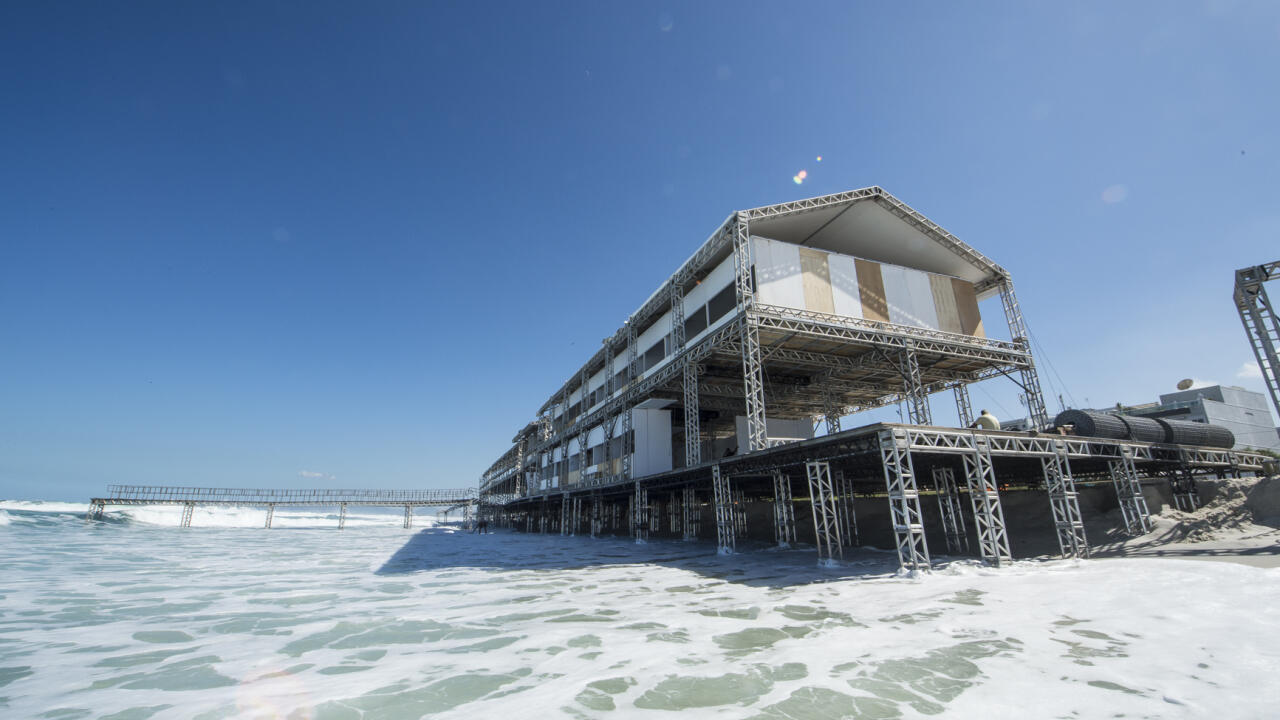 Event structures like the one at Postinho can take six months of planning and 30 days to build, yet only few hours of storm surf can undo it all. - WSL / Thiago Diz

Whether adjacent to a bustling city, like Snapper Rocks, or miles from shore at a Fijian reef, there's an army of engineers working behind the scenes. Cables and wires are laid, huge structures are built and furnished, signage designed and delivered, food services scheduled and prepped -- everything from bagels to bathrooms are accounted for. Contingency plans are key. While Postinho gets rebuilt construction at Grumari is also ramping up. - WSL

And then there's the contingency plans just in case nature wants in on the call, which it did in Brazil. The waves at Grumari offer plenty of punch and workable face, which bodes well for competitors. - WSL / Marinho Santiago/Click Marinho

What's happened in Rio is not exclusive to Rio. And we're actually lucky that this storm hit with a week left before the event.

This week storms flooded the huge site being constructed at Postinho, the primary hub of the Oi Rio Pro. Erosion beneath the structure rendered it unsafe. Now, with fewer than four days to go before the Oi Rio Pro waiting period begins, the WSL events team is doing the impossible, creating two new sites from the ground-up.

"We lost six months of planning and 30 days of work," said Xandi Fontes, General Manager of WSL South America. "But it's amazing to see our backup plans in action."

With the clock ticking, everyone is in high, espresso-fueled gear.

"By the time the storm came we already had both sites established, as they should be," said Renato Hickel, Deputy Championship Tour Commissioner. "But all of a sudden you have to improvise and divide your staff. Specifically for me and Kieren Perrow, the Tour Commissioner, the one thing that is imperative for us is that we have a secondary site to optimize the waves." After the storm crews at the Postinho site had to remove several structures and rebuild them in a hurry. - WSL

Fortunately, this isn't their first time dealing with adversity. It's actually par for the course with surf events. "Over the years we've had so many fallbacks in terms of events and structures. What's happened in Rio is not exclusive to Rio. And we're actually lucky that this storm hit with a week left before the event," Hickel explained. "If it was closer, we wouldn't have had time to build out a second site." In Hickel's view, having the storm hit a week before the event was the saving grace: It allowed crews to divide and conquer to quickly tear down and rebuild. - WSL / Thiago Diz

The logistics surrounding Grumari are significant for fans. Parking is extremely limited, so fans will have to be bussed in. Fontes and Otavio Perdigao, the executive producer of the contest, will be encouraging contest-goers to arrive early to avoid bottlenecks and big lines. While competition will begin down the coast at Grumari, if conditions permit, Postinho will be ready to host the Finals again. - WSL / WSL/Alexandre Salem

Meanwhile, the larger party will remain at Postinho, where giant screens will keep crowds in touch with all the live action while allowing them shop, eat, and stroll along the sponsor village. There will be music, athlete signings, a Corona lounge at K08 club, and more announcements are in the works, for a massive beach festival. Grumari has long been a favorite for pro surfers on lay days, and local Rio surfers with enough time and motivation to get there. It's not hard to see why. - WSL

In Brazil the party never stops. And for the next few days at least, neither will the WSL events team. "We have incredible people making it happen," says Hickel. "Challenges like this are what make this job exciting." The rapid rebuild at Postinho is underway. - WSL / Anna Dimond

Watch the Oi Rio Pro streaming live daily on the WSL website and app, May 10-21.