The Ichinomiya Chiba Open has continued with another massive day of action at Shida Point. Wave sizes dropped from to two feet, but conditions stayed clean for the completion of Men's Round 2 and 14 heats of Round 3. With Round 3 came the top seeds as some of the world's top surfers hit the water at one of Japan's best known surf spots.

Round 3 got underway as the tide began to bottom out and conditions became extremely tough to deal with. Bino Lopes (BRA) didn't seem too concerned with this as he powered into the few open-faced right-handers on offer posting and impressive heat total of 16.83 (out of a possible 20) to take the heat win. "When the conditions are like this it really comes down to luck," Lopes said. "I felt like I was in a good rhythm and was sitting in the right place to get the good ones. Once I had the 7.83 I felt comfortable and could build on it, then I got a 9.00. The last time I surfed at this spot I felt a good connection like today, I hope that continues."

Frenchman Marc Lacomare (FRA) found himself in an elimination position for the majority of his Round 3 heat. Struggling to find a wave that offered him any good turn sections, Lacomare took off on what looked like a closeout and pulled a solid air-reverse to post a single wave score of 7.03 (out of a possible 10). He then backed it up with a 7.67 with two big backhand snaps and moved into first position. Marc Lacomare made a late charge to win his heat. - WSL / Bennett

"I was trying to get the open faced waves early but it wasn't really working for me," Lacomare said. "I couldn't get a score with the turns so I found that one and it had a great air section on it so went for it and luckily landed. The few days before the comp we had really fun waves so I hope the swell builds again later in the week."

Former Championship Tour (CT) competitor Heitor Alves (BRA) was forced to surf on unfamiliar equipment after the airline lost his board bag. Alves didn't seem too unsettled as he took off on a number of waves to feel out his borrowed equipment. He eventually found two decent waves for a heat total of 15.16 for the heat win. 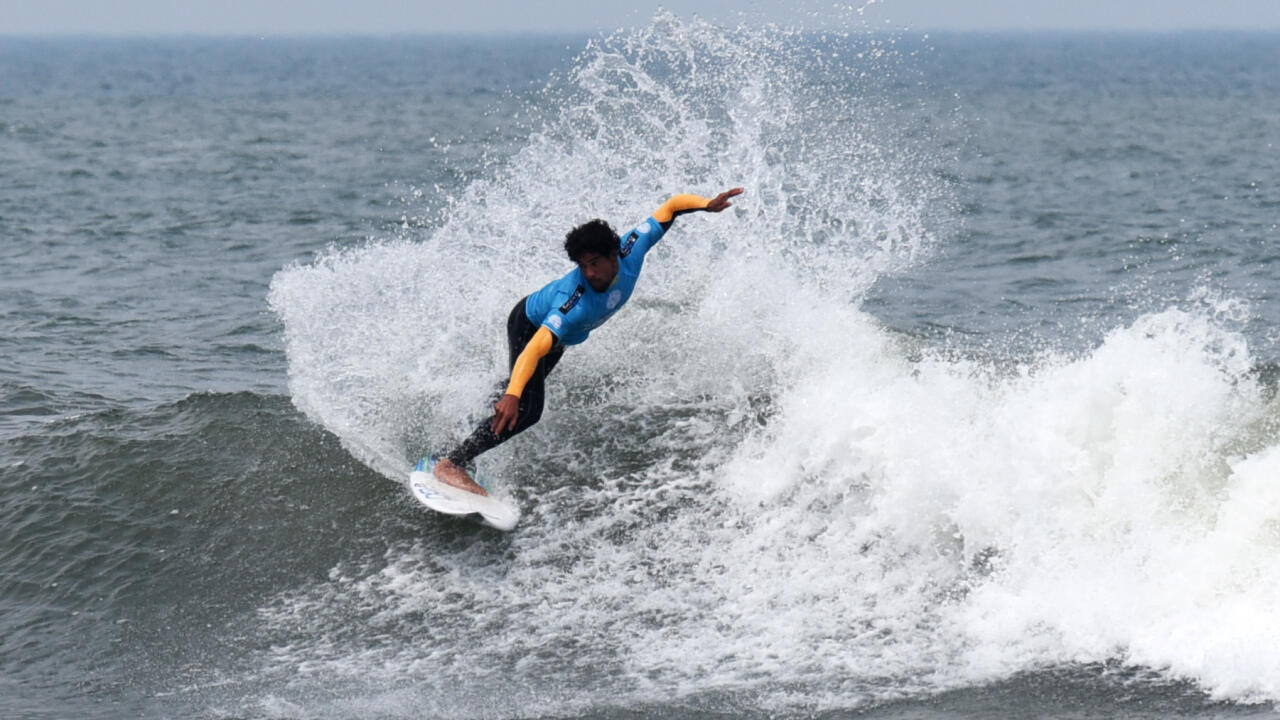 "I was really nervous all week because my boards hadn't actually arrived," Alves said. "I got on a new board from a local shaper and wasn't very in tune with it. Eventually I got used to it and it felt good under my feet so I'm stoked."

Known for his massive power turns and heavy-footed surfing, Wade Carmichael (AUS) had the tough task of surfing against Yago Dora (BRA) after his near-perfect heat yesterday in small, cross-shore conditions. Carmichael wasn't fazed as he put down a some huge turns for a heat total of 15.77, eliminating the in-form Dora. "There is always a chance that these events will be scrappy," Carmichael said. "I was prepared for any conditions this week which is a good frame of mind to be in. Regardless of the waves you can still get the best waves on offer in the heat and that's just what I aimed to do. I didn't really think too much about Yago's performance yesterday. Today is a completely different day so I wasn't too concerned."

Last time a large-scale QS event was held in Japan it was won by Mitch Crews (AUS). Today his love affair with Shida point continued as the former CT competitor posted the highest single wave score of the day, a 9.57 with a number of solid forehand snaps. "It's good to be back in Japan," Crews said. "I'm glad I got a bit more tide in my heat than the earlier ones, it doesn't seem to be closing out as much. I was hoping the wind would still be coming from the north so I could go for front side airs but it didn't matter to much, staying on the wave worked for me today."

After finishing runner-up at the World Junior Championships earlier this year, Guadeloupe's Timothee Bisso (GLP) has been carrying serious momentum. This continued today as the young goofy-footer went to town on the waves on offer at Shida Point. His lightning quick surfing was rewarded with the highest heat total of the day, a 17.33. "I went out with the plan to surf backside because all the good scores were coming from backside surfing," Bisso said. "I didn't really look for many lefts until those last two sets then I got that last one that had two really nice sections. I knew it would be a good score so I was stoked when I heard it was an 8.83."