The Quarterfinalists have been decided in a thrilling day of action at the Ichinomiya Chiba Open. After the cold blustery conditions of yesterday, Shida Point turned on offering the best day of conditions this far in the waiting period with super clean two-to-three foot beach break peaks for the world's best surfers to put on a show.

One of the most exciting match-ups of the contest so far occurred in Heat 2 of Round 6 as the newly crowned Australasia JQS Champion Ethan Ewing (AUS) came up against current Qualifying Series (QS) rankings leader Leonardo Fioravanti (ITA). Fioravanti got off to a flying start posting a 7.67 (out of a possible 10) then backing it up with an excellent 9.27 for a huge full rotation air-reverse. Ewing was left chasing a combination score. Ewing, showing nerves of steel, hunted a 7.87 but was unable to find a second high scoring wave, leaving Fioravanti to move into his third QS,6000 finals series for the year. Leonardo Firoavanti finds himself in the Quarterfinals again in 2016. - WSL / Bennett

"I'm feeling really good at the moment - everything seems to be going my way," Fioravanti said. "The waves are really fun out there today. I've been competing against Ethan since I was a kid so I know how good he is and how tough that heat was going to be. I'm just feeling really confident at the moment; turns and airs are all working. I'm just stoked to be doing well and be back here in Japan."

Willian Cardoso (BRA) has been posting solid scores consistently all contests with his massive turns and powerful surfing. Californian Tanner Gudauskas (USA) was aware of this and knew he would have to bring his best to beat the rampaging Brazilian. Gudauskas held the lead for the majority of the heat and looked safe until; needing an excellent score Cardoso took off on a great looking left with priority and smashed four huge backhand turns. The Judges appreciated his surfing but Cardoso just came short, gifting Gudauskas a spot in the Quarterfinals. 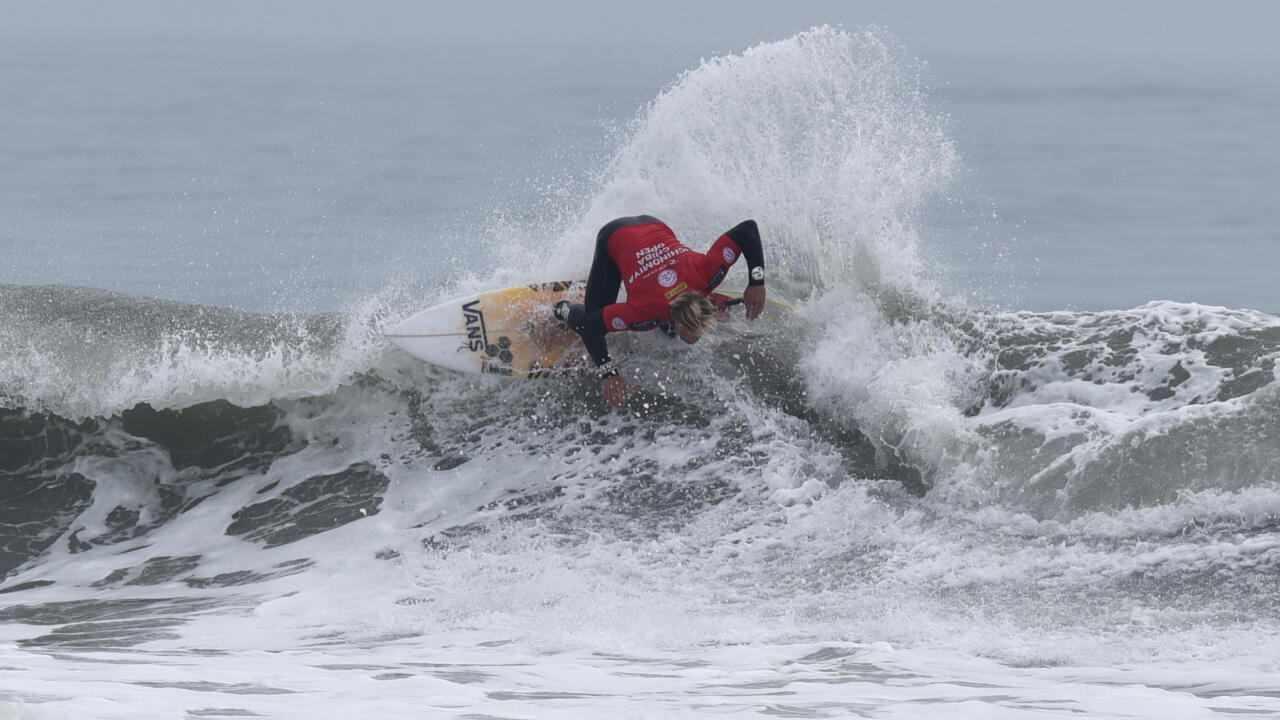 Tanner Gudauskas belts the closeout on his way to the Quarters. - WSL / Bennett

"There was nothing I could do when Willian took off on the wave," Gudauskas said. "It sort of worked out because I ended up getting an 8.00 on the wave after it but I know Willian is so good so anything could have happened. I got too the Quarters earlier in the year so I'm stoked to get to another one. This is such a great contest, mixing a comp and the culture of Japan, there's nothing better."

Brazilian Victor Bernado has been building all contest with his wave totals becoming almost as high as the aerials he has been performing. Bernado posted and excellent 9.17 for a giant full rotation front side air-reverse. He was unable to post a solid backup but it was enough to overcome Tahitian Mateia Hiquily. Victor Bernado keeping it on the face. - WSL / Bennett

"I've been struggling on the QS for a few years now," Bernado said. "Getting to the finals in an event of this size means so much to me. I hope I can continue further in this contest and maybe string a few good results together with the confidence I have built here this week. I feel really comfortable doing airs and I know they'll earn me good scores when I land big ones."

Thomas Woods (AUS) is surfing not only for coveted QS points, but each heat also means more prize money and will help him fund his travel to future events. Woods has surfed consistently all contest with an awesome blend of progressive and conventional surfing. His Round 6 heat was no different with the natural footer posting a solid heat total of 14.50 to overcome inform Hawaiian Tanner Hendrickson (HAW) by just 0.10 of a point. Thomas Woods booked himself a spot in the Quarters in Japan. - WSL / Bennett

"This is a huge result for me," Woods' said. "Obviously the points are really important but making heat means making some money which for me is the difference between making it to the next contest or not so I'm really happy. Ideally I would want to win but I told myself a semi's finish would be great so if I can make one more heat at least, I'll be stoked."

Check Back tomorrow as we will crown a Men's and Women's Champion at the 2016 Ichinomiya Chiba Open.

After a lack of swell forces a lay day, a huge storm front moves through bringing plenty of waves and action for Round 4 at Shida Point.