Fiji is the first true-left reef of the season, with potential for ideal conditions. Owen Wright made history here last year, posting two perfect 20 heats in heavy, barreling surf. Experience has been valuable in the last few seasons; since 2013, rookies are averaging -.51 heat points below the rest of the CT. In fact, the most experienced surfers in Fiji (since modern scoring in 2003) are Mick Fanning (all nine events surfed), Joel Parkinson, Kelly Slater and Taj Burrow (both with seven events surfed). Combined, they boast a 14.55 location Average Heat Score (AHS), 5 Finals Appearances (FA), and 4 Wins - not too shabby. In contrast to the beach breaks of Rio, Tavarua celebrates lineup knowledge and strategy. A more concise takeoff zone caters to wave selection and priority; look for the veterans to take a stand. With a new generation already asserting their presence in 2016, Fiji represents a crucial battlefield. John John Florence [top] has made the Quarter-Finals in each of his three Fiji contests. - WSL / Kirstin

John John Florence (Projected 14.41 AHS / 115.6 FP) - After missing Fiji last year due to injury, Florence is healthy and coming off his first CT win since France 2014. John John has never missed a Quarter-Final here, and a solid 14.54 Fiji Average Heat Score (AHS) suggests he's very comfortable in a barreling left-hander. With a new confidence after Rio, this could be the time to pick up Florence.
Odds -10:1 Italo Ferreira (Projected 13.97 AHS / 97.58 FP) - With a Quarter-Final Appearance (QFA) in his Fiji rookie debut, Italo Ferreira was beginning to turn heads last season. He posted a 13.51 event AHS and 86.24 Fantasy Points (FP) for 8th fantasy place - not bad for a guy most had written-off as "small-waves-only." Ferreira is no longer a secret in big swell events, but that shouldn't stop you from considering him for Tier A - he's really, really, ridiculously good.
Odds -11:1 Adriano is only averaging 58.05 FP/Event over 6 Fiji competitions; after winning the Pipe Masters in 2015, could this be his breakthrough year at Tavarua? - WSL / Kirstin

Adriano de Souza (Projected 13.5 AHS / 81.06 FP) - The defending World Champion made his first Semi-Final of 2016 in his home country last event, and he needed it. It hasn't been a full on "World Title Slump," but Adriano is hoping he's already used his two throw-aways (13th at both Bells Beach and Margaret River). No one considered him a big wave specialist either, until he won the Pipe Masters last year - and this is the first event with similar conditions since. His projection line isn't as strong as some of the other surfers in the tier, but if you think more teams will fade De Souza than his fantasy potential suggests, it's something to think about. Winning Pipe is the only point of reference for success, though, and last year he only posted 36 FP.
Odds -17:1 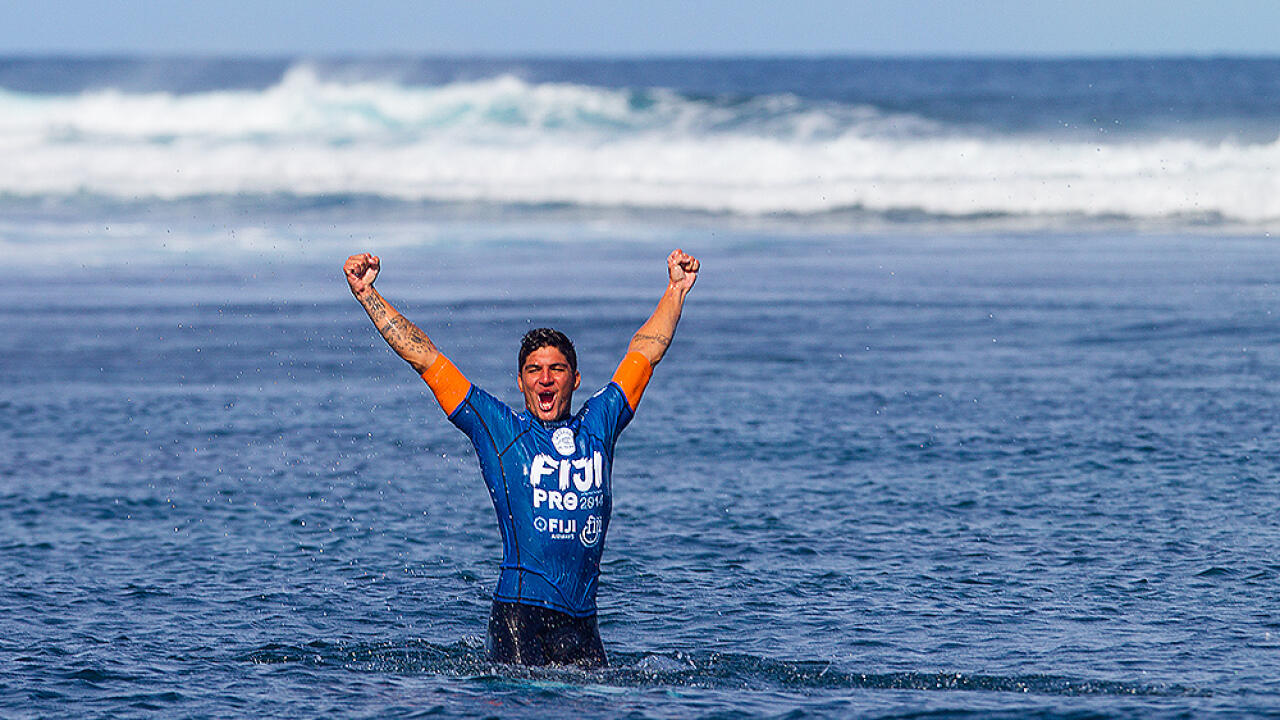 Nat Young (Projected 13.35 AHS / 66.2 FP) - Young made the 2014 Fiji Pro Final, losing in combo-fashion to Gabriel Medina. His other finishes have been 9th in 2013 and 13th in 2015. Nat holds a respectable 13.43 event AHS for 74.47 FP/Event, but that Final was the only time he made it to the Quarters in three contests. The inconsistency makes this a risky pick, but obviously the ceiling is high enough for consideration. Could he be due for an event win? Maybe. But in Tier B you get four picks, so even a Quarter-Final berth holds value.
Odds -31:1 Fanning just missed two consecutive CT events for the first time since 2008, but he's the only current CT competitor to make every Fiji contest in the last 14 years. - WSL / Kirstin

Mick Fanning (Projected 14.11 AHS / 85.26 FP) - Fanning hasn't missed an event in Fiji since modern scoring in 2003, so it's safe to assume he enjoys the location. He hasn't won here, but he's made 3 Quarters, 2 Semis and 1 Final, posting a career 13.88 AHS and 73.15 FP/Event. This season Fanning has eased off the tour, and while he took 3rd at Bells, that was before he actually missed an event. The last time Mick missed two consecutive events was in 2008, when he returned for a 17th place at Pipeline in similar conditions to Fiji. There are good and bad takeaways here, so hinge this pick on where you think ownership percentage will land.
Odds -14:1 Freestone hasn't competed in these conditions on the CT yet, but after a Final berth in Rio there could be some Fiji sleeper value in the wings. - WSL / Kirstin Scholtz

Jack Freestone (Projected 14.4 AHS / 100.66 FP) - Freestone put together a stunner in Brazil, making it all the way to the Final with John John Florence. It was a grueling, Bye-less path, too, in which he defeated Jeremy Flores, Jordy Smith, Italo Ferreira and Gabriel Medina. This was especially encouraging because it was Jack's first event back from injury. He showed no signs of fatigue or rust and elevated his 2016 AHS to 13.49. He'll need to put up some points to return similar value out of Tier B, but his ownership percentage will likely be lower here. It's a gamble, but likely one worth the risk.
Odds - 11:1 Taj Burrow (Projected 12.71 AHS / 37.95 FP) - Taj is the latest of the legends to hang up their jersey in retirement, and it will be bittersweet to watch him surf his last competitive heats. Do you draft him for his swan song? The stats suggest him or Slater. Burrow has only made one Semi-Final in seven events and his career Fiji AHS stands at 12.25. He'll also take on goofy-footer Adrian Buchan and powerhouse Jordy Smith in R1. Look for Taj to let loose and really enjoy his final event, but it might not translate to points.
Odds - 94:1 Kelly Slater (Projected 13.18 AHS / 39.3 FP) - Kelly has been, by far, the most dominant surfer at Fiji. Since 2003 he has 4 Wins, an unreasonable 16.46 AHS and 86.99 FP/Event. Last year he came in a bit low for those standards with a 14.06 AHS for 70.32 FP, and while that's on a downward trend, it's still better than the CT average. Slater will look to turn his season around and you might want to have him back on your team for it. The risk is still very high considering how 2016 has gone so far, but other players are becoming very bearish on Kelly, perhaps to a degree that you can exploit it.
Odds -48:1

Hope that helps get your team ready for the Fiji Pro, starting on 5 June (4 June if you're a day behind Fiji!). If you want to chat fantasy, come say hello on Twitter: @FantasyWSL and @RossWilliamsHI. Good luck and see you on the leaderboard!