The Junior Men put on a showcase of great surfing in the clean lines Zippers had to offer throughout the morning during the Los Cabos Open of Surf Quarterfinals. After having a lay day yesterday, some of the competitors lost none of their rhythm with the ocean and found themselves on the best waves to earn spots in the Semifinals.

Eithan Osborne (USA) took full advantage of the improved conditions and posted the second highest single-wave score of the event with an 8.17. Osborne came into Los Cabos prepared for anything with a strict training regimen which has helped earn him a spot in the Semifinals. Finding a solid backup, the Ventura, Calif., native has elated with the chance to showcase some of his potential at Zippers, the righthand pointbreak.

"I do a lot of kickboxing mixed in with strength and conditioning training to stay fit, but to train for a contest like this you just have to surf smaller waves and help prepare for anything," Osborne said. "I was psyched on that wave since it was one of the only good ones during that heat and so stoked to get an excellent score -- it's still pretty tough out there. The number of turns you can do on the wave has increased so much. It's pretty close to the rocks still but so much cleaner. 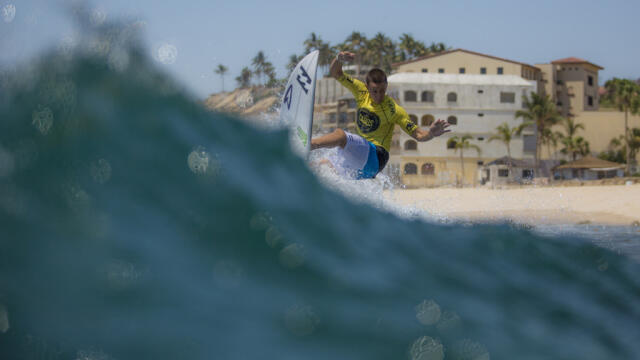 Putting his fitness training to good use, Eithan Osborne powered through the improved conditions and into the Semifinals with a massive 8.17. - WSL

"Today we were able to get deeper in the lineup since there isn't that chop to it from previous days and get a full ride in," Osborne added. "I'm so stoked to make it through, this is already a good result for me so now I want to try and get a win here."

Kei Kobayashi (USA) currently holds the No. 1 ranking for the North America Junior Tour with a win at the first regional contest earlier this year in Florida. Grinding through the small conditions there, the 17-year-old knows how to make heats with the proper equipment and is riding a similar board for the improving waves. With another win, Kobayashi has the opportunity to put some distance between him and his fellow competitors -- though it was not an easy route to the Semifinals.

"The last few minutes I went on a wave I shouldn't have but the heat ended up my way and I'm stoked to make it through another round," Kobayashi said. "The waves are really small but I've got some good boards under my feet from Matt Biolos so I'm set for this and when it picks up. It's a 5'5 and half epoxy that's great in smaller, clean surf and it's one of the first epoxy boards I've gotten -- it's working really well. I'm really focused on these Junior events this year. Every heat is so important and there's no easy heats with the guys that are here ripping so I'm stoked." Ryland Rubens (USA) found himself into the Quarterfinals but was left searching for more and will look to better this result at the next North America Junior Tour event. - WSL / MARENELMAR

Hailing from South Carolina, Luke Gordon (USA) is no stranger to smaller conditions and has put that experience into fantastic results here at Zippers. Posting a 10.44, Gordon found a wave that allowed him to post a good number on just one maneuver -- taking to the air for the first time at this event. Gaining vital points here, Gordon is keen on a win and looking poised to move up the rankings list on the North America Junior Tour.

"The wave was pretty small and I didn't want to go for three little turns so I tried to boost one big air and so glad I stuck it," Gordon said. "To win this would be amazing, I'd be beyond stoked. I'm just trying to make it through these heats so I can get into the bigger swell and surf in those conditions -- this wave is amazing and can't wait to see it get better. I'm only 16 so I still have a few years left on Juniors but it's getting to that point where I want to start getting some big wins and work toward a spot into World Juniors."

Showcasing a brilliant forehand to round off the Quarterfinal bouts, Marco Mignot (FRA) put together a solid heat in his victory and is one step closer to a big result in his third Junior Tour event this year. Though these points won't count toward his European region, the experience here will be valuable to take away from competing against surfers he'll begin to see more and more throughout his career. Marco Mignot (FRA) can't earn points here at the Los Cabos Open of Surf being out of the European region, but experience is a vital factor in success of a surfer's career. - WSL / Marenelmar

"Coming here and winning wasn't something I was really worried about -- I just wanted to have fun and get some experience out here so this is incredible," Mignot said. "I have a lot of confidence moving forward and now I want to win so bad. I don't have any pressure since this event doesn't affect my points but I'm learning so much.

"At the start of my Junior career I didn't really know how priority worked completely but it's something I understand really well now and for a wave like this it's so nice to have. You're not scrapping against each other for every wave and if they take off on a bad one it works out great allowing you to pick the best waves." With the Quarterfinals in the books, Junior Men will wait to find out when they will get their Semifinals matchups in the water beginning tomorrow morning. - WSL / MARENELMAR

The 7:30 a.m. MDT call tomorrow morning will determine if Semifinals get underway at the Los Cabos Open of Surf. Tune in live at loscabosopenofsurf.com and witness all the action happening at Zippers on the shores of Costa Azul.

Ripping through a stacked field, the Californian earned a massive win on his last wave of the final.

Round 2 of the Los Cabos Open of Surf saw the introduction of Top Seeded surfers who showed their form at Zippers.