Finals Day at Punta Roca
2:52
Keely Andrew (AUS) takes down Alessa Quizon (HAW) in the Final after neither lost a heat throughout the event

The World Surf League (WSL) Women's Qualifying Series (QS) Copa El Salvador Impresionante QS6000 presented by Body Glove crowned Keely Andrew (AUS) as the 2016 champion after a spectacular event came to an end. Andrew had to overcome an in-form Alessa Quizon (HAW) in the Final but managed to find her two gems amidst tough conditions. The morning began in clean, three-to-five foot waves before the prevailing onshore wind took hold and surfers had to be patient to find the gems that still remained.

Earning runner-up here last year, Andrew came back with a score to settle at Punta Roca and looked determined to win. Posting one of the event's highest heat totals of an 18.16 in Round 5, the Australian had this wave dialed in as she continued that momentum into the final day of action. Her road to the Final was no easy task facing Coco Ho (HAW) in the Quarterfinals before taking down event standout Bronte Macaulay (AUS) in the Semifinals. Andrew found her rhythm with Punta Roca once again, not losing a single heat en route to her victory. - WSL / Kurt Steinmetz

"Last year kind of stung a bit so I came back here really wanting to get the win and I'm so stoked to pull that off," Andrew said. "This is massive for me. I need to get points for re-qualifying since I'm sitting 15th on the CT and have to get good QS results. Alessa is an incredible surfer and an amazing person, I watched her drop those huge scores in the Semifinal so that onshore win played to my advantage a bit. I was able to read the wave with the bumps coming in it and fortunately got two scores."

The 20-year-old stayed busy throughout this event and kept finding the waves that allowed her maxium scoring potential. Moving into the No. 4 spot on the rankings with the win, Andrew can rest easy going into the mid-season break before returning to a jersey at the Supergirl Pro next month.

"I try to stay loose in the water, you don't want to get stuck waiting, especially when conditions start getting slow like they did," Andrew added. "I had a good strategy set and I'm stoked it all fell into place. I'm so fortunate to have all the support of my family and can't wait to see them when I get home." Competitors were treated to incredible conditions day in and day out upon arriving each morning to Punta Roca. - WSL / Kurt Steinmetz

Runner-up finisher Alessa Quizon (HAW) blazed through this event with her backhand attack and posted incredible numbers throughout it. Earning the event's highest heat total of 18.33, and single-wave score of 9.73 in the Semifinals, the Hawaiian looked poised for a win of her own after taking down Silvana Lima (BRA). But, as the conditions got tricky, it became difficult for Quizon to maneuver through the bumps and find a wave that would allow her to open up.

"I'm feeling good, but I wanted to do better," Quizon said. "We had such good waves this whole event so it was disappointing the wind picked up and the waves deteriorated for the final. Keely surfed great and we took advantage of the good waves as best we could so I'm pretty stoked." 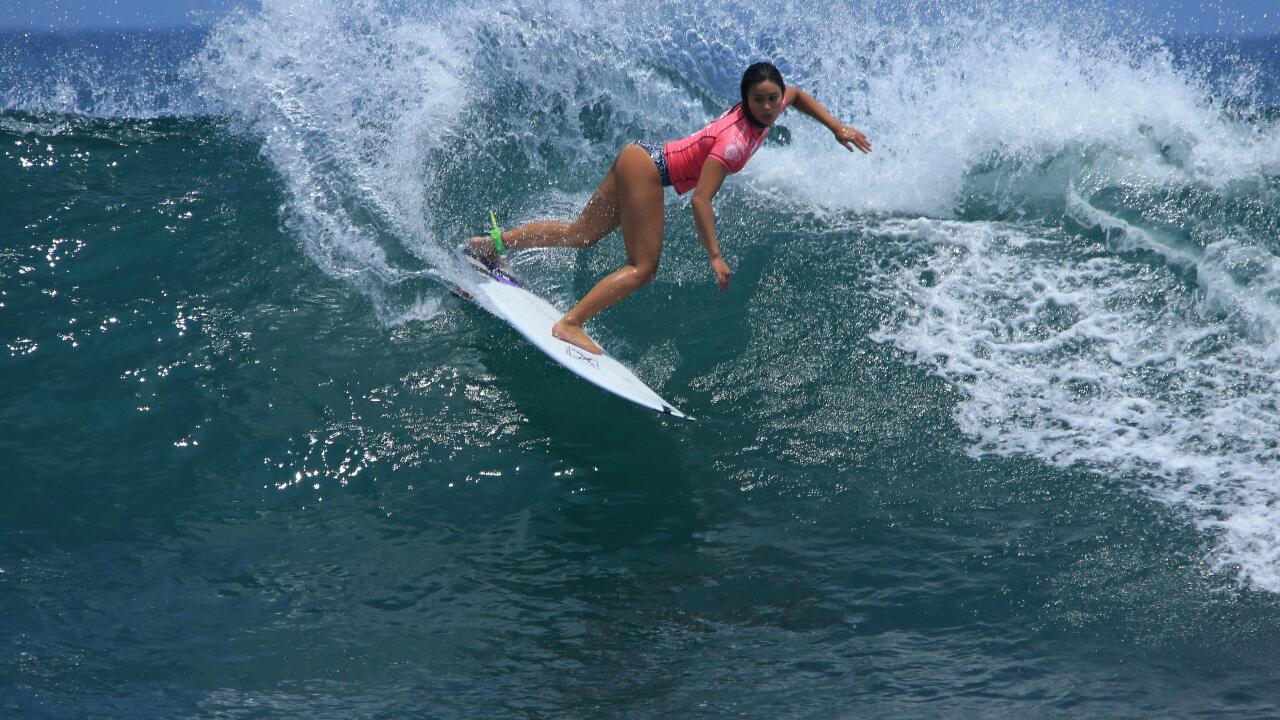 It was a battle of the event standouts in the Final as Quizon did not drop a heat leading to her matchup with Keely. - WSL / Kurt Steinmetz

Quizon earned a valuable 4,550 points as she came into this event ranked No. 31 on the QS and sits outside the cutoff line for CT requalification. But, this may have been the spark she needed to turn her season around and use this momentum toward the second half of 2016. The Hawaiian backhander now looks toward the Supergirl Pro, an event she posted a Quarterfinal result in last year. - WSL / Kurt Steinmetz

"I really want to make more finals and start getting consistent results," Quizon added. "There's still a long season ahead with the CT as so everything's going well. It feels great to get a good result when you haven't gotten one in a while. I felt really good on my backhand, this is one of the best QS events we have on tour and hopefully we can have it again next year."

Bowing out in the Semifinals, Bronte Macaulay (AUS) finishes the Women's QS Latin American leg atop the rankings and its top performer -- earning 9,550 points between the two events. Macaulay was a standout throughout this entire event, posting numerous excellent scores and maintained one of the highest heat totals with an 18.16 in Round Five. Competing at the CT and QS level since the start of the season, the Australian is looking forward to a well-deserved holiday until the Supergirl Pro next month.

"It's been a really fun week and this is definitely another keeper result so I'm excited," Macaulay said. "All the free surfs and some heats, especially that one with Tatiana, stand out to me looking back at this event. I wanted to get an equal fifth or better and this is my best year yet with all the competing I've done. It'll be great to go home and see some family, I've been in a jersey all year so to get a bit of a break is always amazing. I'm really looking forward to Oceanside." Bronte Macaulay (AUS) took top honor during the Latin America leg and is looking strong for a qualifying spot on the dream tour with her dangerous backhand. - WSL / Kurt Steinmetz

Silvana Lima (BRA) earned back-to-back Semifinal appearances at the Los Cabos Open of Surf and here at the Copa El Salvador Impresionante, putting her in the Top 6 of the Women's QS rankings. The Brazilian continued to show her prowess in the air but could not find the landing against an in-form Quizon. Lima now has her expectations set high and will have two more QS6000 events to find her place back on the CT.

"This is another really good result for me and I'm really happy for that, even though I would've loved to make the final," Lima said. "I know my surfing is still good, my mind's in the right place, and I feel at 100 percent going into the next event. I'll go back to Brazil and get right back to work with my training, getting my boards dialed for Supergirl, and try to get another result there. I want to re-qualify so much, the CT is where I want to be and just want to do my best surfing for a spot back there." Silvana Lima (BRA) was devastated not re-qualifying for the CT coming into 2016 and is now sitting at No. 5 on the Women's QS rankings with a chance to do so. - WSL / Kurt Steinmetz