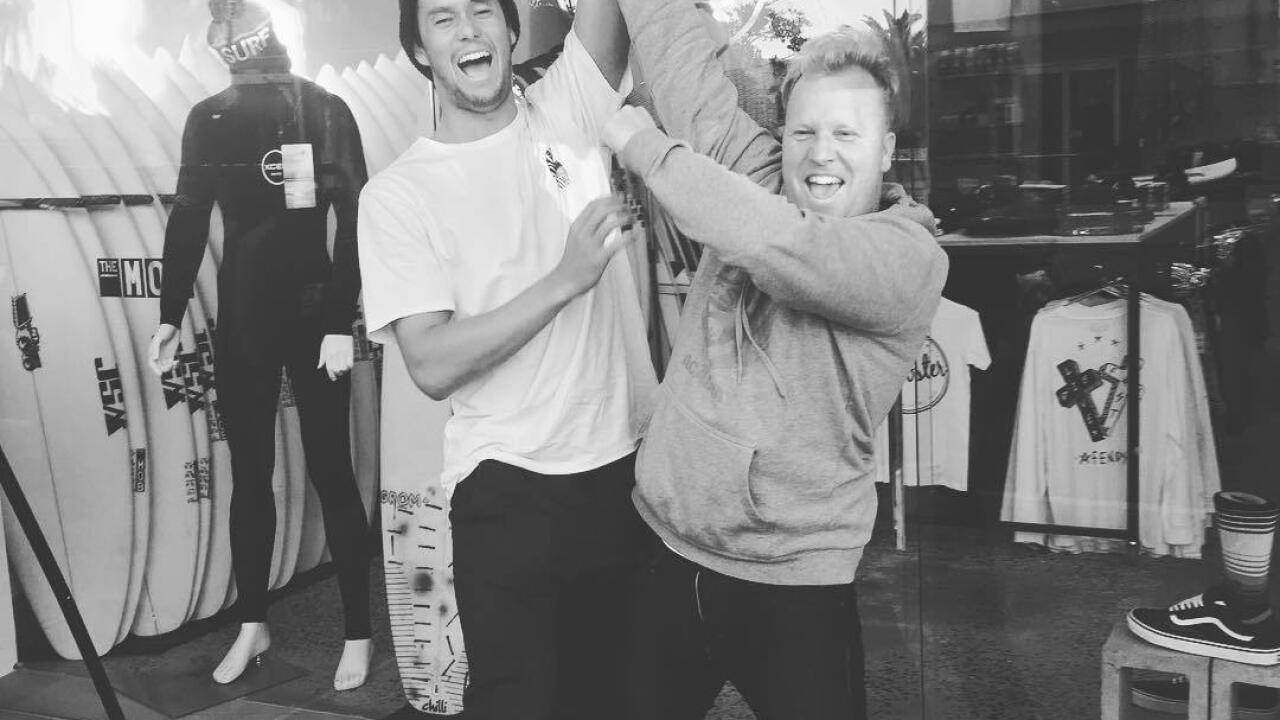 With his massive win at the QS10,000 Ballito Pro, Cronulla's Connor O'Leary pocketed a $40,000 check and moved to No. 2 on the Qualifying Series (QS); a huge step in his quest to qualify for the 2017 Championship Tour.

But O'Leary isn't getting ahead of himself. The ups and downs of QS life have a way of keeping surfers planted in reality. In between traveling to events, the goofyfooter still moonlights at his local surf shop, MOB (Members of the Board), owned by his coach and mentor Blake Johnston. O'Leary's win at the Ballito Pro in early July was the biggest of his career. - WSL / Kelly Cestari

"Connor has zero ego," said Johnston. "He can fit into any group of people and make them feel comfortable."

As coach of the Cronulla Surfing Academy, Johnston has been working with O'Leary for more than a decade. He opened MOB a year ago to help bring the local surfing community together by providing them a gathering place for solid product insight and information.

When Connor is in town he's either assisting surf classes or working the shop floor, connecting with locals. O'Leary is hoping to follow in the footsteps of other Cronulla greats, like Mark Occhilupo. - WSL / Kelly Cestari

"The groms are so stoked when he's in," Johnston said. "Customers want to have confidence in the advice they're getting, and to get it from the surfers who are out there ripping in the lineup is great for everyone."

O'Leary loves the benefits, too. "It gives me the opportunity to hang out with the local community who have supported me the whole way through."

In 2015, O'Leary was just a couple of heats away from qualifying for the Championship Tour. - WSL / Laurent Masurel

Cronulla, O'Leary's hometown, is located on the southern outskirts of Sydney and is one of surfing's deepest talent pools. It's famous for its slabby reefbreaks like Shark Island and Voodoo, and for producing some of surfing's biggest stars.

"It's been a long time since we had someone from Cronulla on the CT," said O'Leary. "We had Occy [Mark Occhilupo], Gary Green and Richard 'Dog' Marsh throughout the 80s and 90s, but then there was a big gap until Kirk Flintoff qualified in 2005.

"So it has been a while and everyone wants to see me do well. I'm lucky to have that heritage and that local support. And, of course, all those legends were goofies, so I'm stoked to be flying the Cronulla goofy flag." The lanky goofyfooter has done a lot of his QS damage on his backhand, but he's no slouch on the forehand. - WSL / Laurent Masurel

Adding some texture to his local cred, O'Leary's Cronulla roots are interwoven with an intriguing international DNA. His paternal grandparents emigrated to Australia from Ireland (as his name might suggest), and his grandfather started a family horticultural business that Connor's father, Finbar, still runs today. Connor's mother, Akemi, was a Japanese surf champion whose family is still based in Tokyo.

"My mum was traveling around the world doing surfing competitions and there was a big event in Cronulla," O'Leary said. "That was where she met my dad and where all this started." O'Leary's hacks have plenty of Cronulla DNA, like this Occy-esque torque. - WSL

O'Leary's family ties run deeper than just his strong surfing stock. He has has a younger brother named Ric, who's 13 years younger, and Connor has been like a second father to him. Johnston explained, "I know that's kept him grounded in a lot of ways."

Meanwhile, Connor's surfing career continues to accelerate. Last year, in his first full year on the QS, he finished at world No. 15, missing qualification by just a few heats. After his strong performance in South Africa, O'Leary will be looking to do some damage at the Vans US Open of Surfing to lock in some of his QS gains. - WSL / Kelly Cestari

"I was just feeling the tour out and getting my head around surfing against the best 100 surfers in the world," O'Leary said. "I was disappointed to miss out, but determined to use the experience to do better this year, and try to have as much fun as I can."

For the past 18 months, O'Leary has been traveling with tour rookie Stu Kennedy, and he's keen to adopt some of the approach that saw Kennedy earn a replacement spot on the 2016 CT.

"His determination and his focus is what I'm trying to emulate," O'Leary said. "I'm fairly cruisy, can get easily sidetracked and not be as focused as I could be. When Stu's in an event, he just clicks into this focused, determined animal. That is something I need to learn to get through those nitty-gritty heats that can make or break you." The progressive side of O'Leary's repertoire is also intact. - WSL / Laurent Masurel

Connor did exactly that in Ballito, using his 6'1" frame and powerful backhand to win the first QS10,000 event of the year and give him a massive boost in his dream for CT qualification.

"Our local rugby league team, the Cronulla Sharks, have just won their 13th match in a row, and are top of the NRL table," he says. "They've never won the competition before, so this year could be their year. If the Sharkies win the Premiership and I qualify for the CT, well, that would be the best year ever." Having come so close to qualifying in 2015, O'Leary's aware of what it will take to break through. - WSL / Laurent Masurel

But Johnston, Connor's coach-boss, isn't worried about losing one of his sales staff. "To me success is only real when you have people to share it with," he explained. "Connor is going to enjoy everything thats coming his way with unconditional support from the Mobsters and the Cronulla community."