It was another remarkable day at the Women's Qualifying Series (QS) Paul Mitchell Supergirl Pro QS6000 with some of the world's best making their debuts at Oceanside. Thirteen full-time competitors from the Samsung Galaxy Women's Championship Tour (CT), including World No. 1 Courtney Conlogue, defending WSL Champion Carissa Moore, defending Supergirl Pro champion Tatiana Weston-Webb, and Lakey Peterson, in her first event back from injury, contested some of the best QS standouts.

The waves continued to deliver for the competitors as clean, three-to-four foot waves offered plenty of scoring potential in the morning. But prevailing winds turned for the worst as surfers still found gems in the turbulence for big scores with Rounds Four, Five and Round Six all being completed. The second day of action witnessed more incredible conditions before the wind took over. - WSL

Silvana Lima debuted in Round Five with a showcase of Brazilian speed and power, winning both of her heats. But it was in her second performance of the day that she turned in the highest heat total of day two with a 16.17 (out of a possible 20). The Brazilian blasted multiple maneuvers all the way to the sand for an 8.67 (out of a possible 10) and found a solid backup, all the while giving spectators a taste of her native flair.

"It was hard out there but I was able to get that big score right away," Lima said. "After I got my two scores I wanted to take to the air and put on a show for the crowd, but just couldn't land one. I love getting the crowd excited and the vibes down here are so amazing. It's always a good event here and I'm excited for tomorrow." Silvana Lima was determined to land an air despite her multiple attempts yielding no success -- a testament to her determination. - WSL / Kurt Steinmetz

Posting the event's highest single-wave score thus far, defending WSL Champion Carissa Moore earned a 9.00 (out of a possible 10) in Round Six, topping her already event-high 8.77 in Round Five. Gauging into a world-class, layback snap on the sizable section, Moore rode out cleanly and into her second heat win of the day. With Nao Omura getting injured in her previous heat, Caroline Marks and Moore were left vying for the top spot. The three-time World Champion is looking to find some momentum from this event into the Vans US Open next week.

"I wasn't even expecting that and just kind of threw it out there with the change in conditions," Moore said. "There were still some punchy sections and with not having to worry about advancing I was just having fun. I was so bummed for Nao, it sucks when you're trying to work on qualifying and get hurt so I'm hoping she heals well." Moore showing that she is prepped and ready to try and take her first win of 2016 at either this event or the Vans US Open with impressive surfing shown today. - WSL / Kurt Steinmetz

"It feels good to get the jersey on after almost two months off and get the nerves out before getting to Huntington," Moore added. "I'm just enjoying my time here and not putting any pressure on myself, hopefully get my groove back. This year I've found it's not about the results for me, it's more about trying to validate myself. I'm on a different path this year -- I'd love to get a win, it's of course what I want, but I'm really just looking to enjoy it."

Two-time Paul Mitchell Supergirl Pro champion Sage Erickson began her campaign in Round Five with an 8.10 and a heat victory. Advancing into Round Seven with a runner-up performance in her following heat, Erickson felt right at home and ready for the weekend's challenges. Her presence is something that can be recognized from anywhere on the beach as all the young and aspiring girls come flocking to her -- something that comes full circle for Erickson.

"I definitely got a taste of both worlds today getting to surf in the morning when it was really clean and glassy," Erickson said. "I keep asking myself what the winning formula is having success here in the past and can't really attribute to anything else but my family and friends here supporting me. It's the most amazing feeling to have that support coming from all the younger girls. I remember being younger and finding any type of encouragement from the pros lasted me a lifetime. I just hope I can give them that same encouragement." Erickson found her rhythm once again on the south side of Oceanside Pier and posted an 8.10 right away. - WSL / Kurt Steinmetz

Meah Collins topped Erickson in her second heat win of the day and broke new ground in her Paul Mitchell Supergirl Pro and QS career advancing into Round Seven. The Huntington Beach, Calif. native is finding more and more success on the QS this year at the young age of 16. Still plenty of time to gain vital experience needed to become a full-time professional surfer, Collins is relishing the opportunity to be in tomorrow's final day of action.

"I'm so ecstatic right now," Collins said. "I've never done well in this contest, just never putting together the performance I needed, so to make it the farthest I have in any QS event is so great. I'm so in awe surfing against the girls I am and just want to keep progressing so I can surf against even more of the top pros. It's such an honor to surf against all these girls and such an amazing feeling." 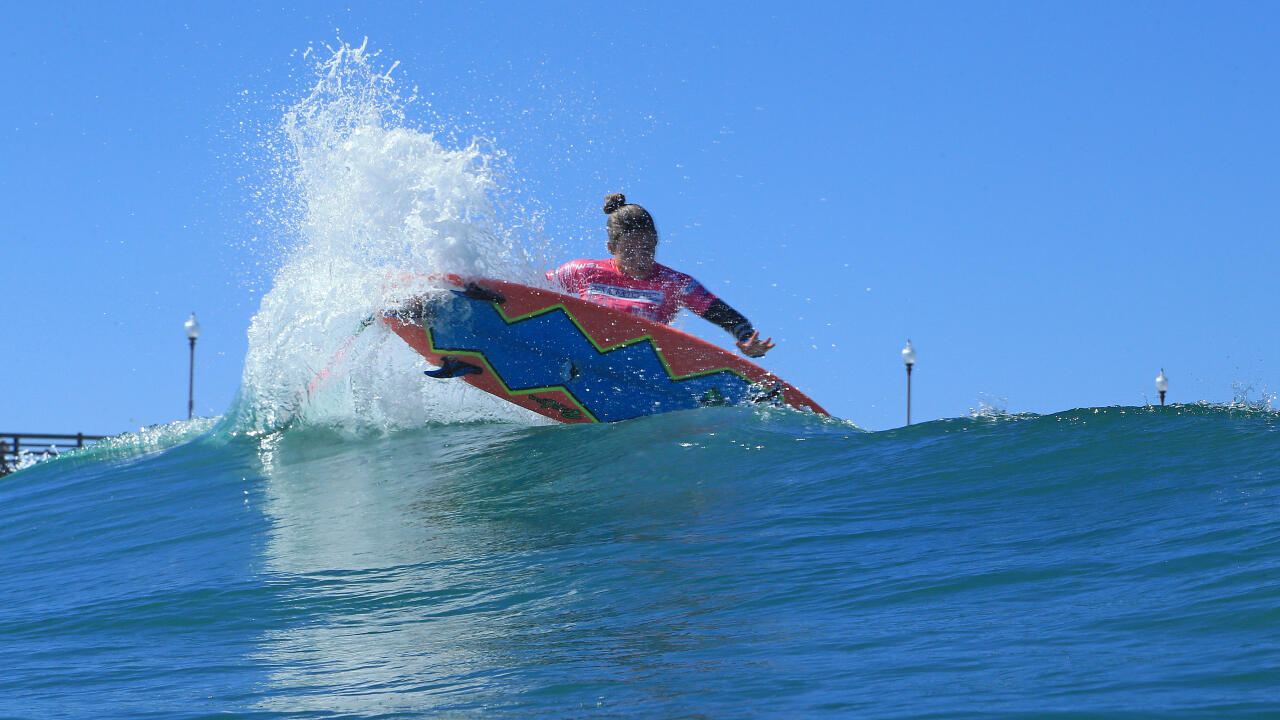 Three rounds down and looking for more, Collins is one to keep an eye on not, only at this event, but in years to come. - WSL / Kurt Steinmetz

Fellow up-and-coming Pro Junior showing she has potential at the QS level, Macy Callaghan topped current World No. 1 Courtney Conlogue in her Round Five heat. Though Conlogue was battling illness and was forced to withdraw from the event after posting a solid 7.33 and taking to the air in massive fashion, it was Callaghan who came out the victor and then went on to win her Round Six heat. The Australiasian Women's Pro Junior 2016 Champion is excited for the experience and joining the QS elite full-time next year.

"It feels so good to make it back over here and surf against some of my heroes and to win against them is really special," Callaghan said. "Getting to surf against Courtney and a win was a real confidence boost even though she didn't look to be at 100 percent. I don't feel any pressure being young and just going into each heat having fun -- really just trying to show what my surfing is all about." Conlogue started her campaign off well but will now look to recover from illness before the Vans US Open to keep her No. 1 spot intact. - WSL / Kurt Steinmetz

Maud Le Car is hoping to find the right formula that will get her back to the podium after a great start to the 2016 season. Starting off with two wins early in the year, Le Car took down the Shoe City Pro in Huntington Beach, Calif., and is excited to be back on familiar soil. The Frenchmen currently sits at No. 24 on the QS rankings and would gain serious momentum with a win here in Oceanside.

"The last few events haven't been good results for me and I just felt like my mind wasn't in the right place," Le Car said. "Coming back to California after winning here earlier this year, I'm enjoying myself and trying to have fun which is taking a lot of pressure off me. I just want to show what I'm really capable of and each time I make a heat is a great feeling."

Tune in live at supergirlpro.com for the 8:15 a.m. PDT start as action resumes with Round Seven, Heat 1. For more information go to www.worldsurfleague.com , or download the WSL App to get event updates on your mobile device.