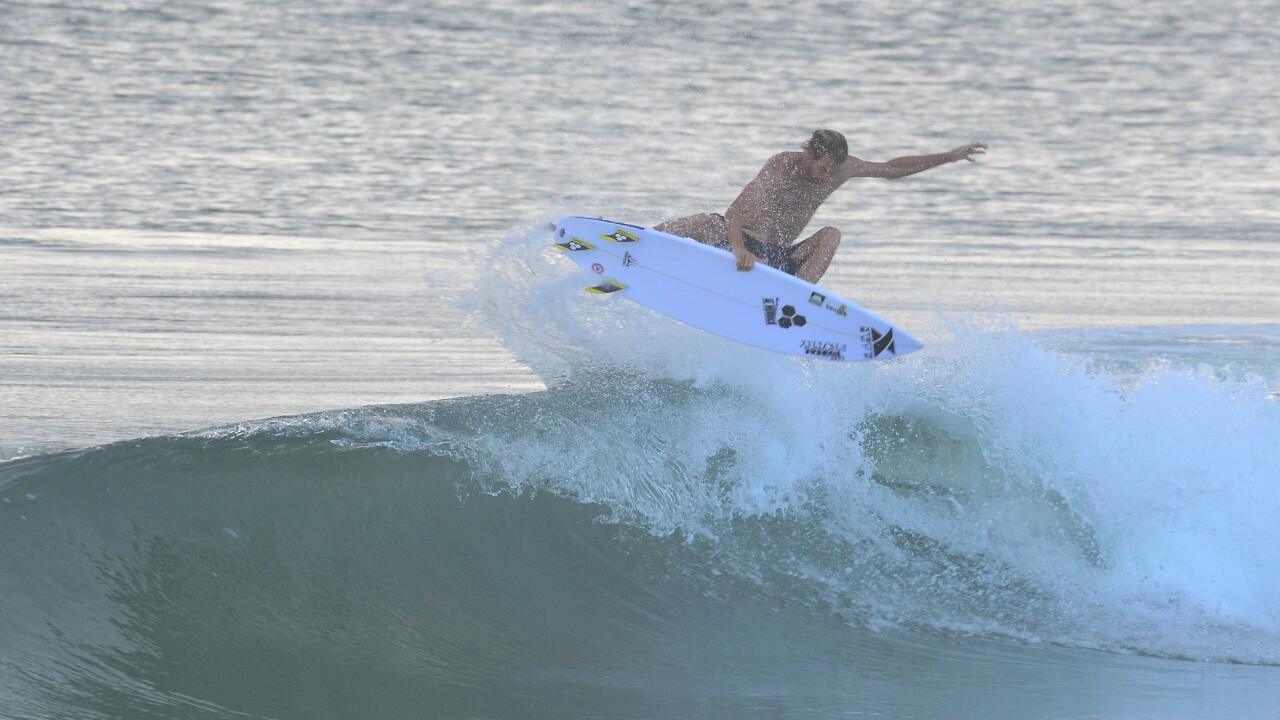 Kilian Garland began his marathon day long before the starting horn sounded and set the bar for what was expected early on. - WSL / John W. Ferguson

The Atlantic Ocean came to life once again for the WRV Outer Banks Pro presented by Pacifico Men's QS1,000 and provided pristine morning conditions that held throughout most of the day. Though one dominant sandbar to the south stuck out among the lineup and provided some heated match ups, surfers were still able to battle through and post massive numbers once again.

Kilian Garland made his way back into the Quarterfinals after a taking part in all three rounds today -- and winning all three. Garland posted the day's highest heat total of 17.17 (out a possible 20) of the event thus far in Round 3 and won his next bout to advance into Round 4. The Santa Barbara, Calif., surfer wanted to earn another finals day appearance and couldn't be happier securing some much needed points.

"I'm really stoked with the waves today offering us a lot of different options with some rights coming through and running lefts toward the south so couldn't have asked for much more," Garland said. "I felt like the wave selection helped me today finding those bigger scores and particularly in that last heat with those guys. Definitely excited to make it to another finals day here and I'll just be keeping my focus on each heat -- hopefully get another great result." Brazilian Victor Mendes (BRA) earned the highest single-wave score of the event with a massive 9.17 (out of a possible 10), but was eliminated in Round 4. - WSL / John W. Ferguson

North Carolina's own Knox Harris had a day worth remembering at the WRV Outer Banks Pro Men's QS1,000. Hailing from Ocean Isle Beach, Harris finds himself in his first QS Quarterfinal after a marathon day of competing and posting Round 4's highest heat total of 14.66. Winning two of his three heats just today, he also earned a Round 1 victory on opening day.

"To do well at this contest means a lot to me being close to home and coming here all the time for swells -- it's just amazing," Harris said. "I'm so happy to get through this far, it's the deepest I've ever made it into a QS event and just want to keep going. I've only done one other contest this year and I'm really hoping to make a run at the QS6,000s next year so I know I'll have some work ahead of me. I've been training a ton and working on my heat strategies so I'm stoked to see those pay off today." Harris remains as the only North Carolina representative and will look to make it count. - WSL / John W. Ferguson

Kevin Schulz has also been in search of a result this year on the QS and looked to be up to the task during his own marathon day of competition. The San Clemente, Calif., native got started with the first heat of the morning and came out firing on all cylinders. Schulz also earned two out of three heat wins, but knows the work is far from done.

"Going through three heats without priority, I'm pretty worn out after that but it feels amazing to make it through all of them," Schulz said. "Especially after having a rough go in Virginia, winning a couple heats and getting that confidence back is great. I've matched my best result here so I'm really looking to better it and even go a little further in this event. I think knowing that we're moving into two-man heats will help us be even more selective and it should be really fun instead of hassling for waves." Schulz narrowly missed on the Quarterfinals last year needing just a 6.93 -- something he will be hungry to fix. - WSL / John W. Ferguson

Jason Torres had a much more difficult path to the Quarterfinals -- being a part of multiple heats with interference situations, meaning a surfer hindered the scoring potential of another surfer. Torres made it through his Round 3 heat after getting an interference called on him for coming across Tomas King, but in his Round 4 heat it was an interference between Jake Kelley and Francisco Bellorin that got him through the heat.

"I am so happy to have made it through that first heat after that call and couldn't believe it," Torres said. "It's such a tough competition out here with everyone doing so well and those heats just make you realize you have to have a Plan B. There's a few different spots that offer waves here which it makes it better but that one sandbar was working so well today. I'm just so thankful I wasn't apart of the interference in my heat and it ended up getting me through." Torres narrowly escaping both his Round 3 and Round 4 heats with impressive backhand attacks throughout the day. - WSL / John W. Ferguson Gabe Kling showed his CT experience and is enjoying his time in Outer Banks as a light-hearted competitor here to see where his beloved sport is going -- though showing he still has some spark of his own. - WSL / John W. Ferguson

A 7:30 a.m. Call will determine an 8:00 a.m. Start for the Quarterfinals. Tune in live at www.outerbankslive.com for all the action when the first horn sounds.

French powerhouses Pauline Ado and Marc Lacomare take Round One by storm at the Las Americas Pro Tenerife.