In a complete visual flashback to the epic contest in 1986, the Hang Loose Pro Contest brought back all the colors and excitement to Joaquina for the start of the World Surf League Men's QS 6,000 on Tuesday. The majority of the surfers competing at the event today weren't even born when the most significant event in the history of Brazilian surfing took place 30 years ago, but were here to take their next step forward in the future of the sport of surfing.

Upon conclusion of the Trials Event, twenty heats were completed in Round 1 with waves in the 3-4 foot range (1 meter) and offshore winds at the lefthand pointbreak at Praia da Joaquina, in Florianopolis, Brazil. The athletes that advanced will now face the top seeds in Round 2, which include recent WSL World Champions Adriano de Souza (BRA) and Gabriel Medina (BRA). In an unexpected turn of events, CT surfer Wiggolly Dantas (BRA) found himself in a Round 1 matchup after entering the event as a wildcard. However, this challenge actually enhanced his performance as he earned an 8.33 for the highest single wave score of the day.

"I just got here yesterday, but my boards still haven't arrived. I only have my step-up board, which is a 6'0", so I felt a little stuck during my turns, but I got that one good right and did three good turns," said Dantas. "I'm stoked to be in Brazil and I'd like to thank the WSL for giving me the opportunity to compete here. I was supposed to go straight to Hawaii, but when I got the invitation, I flew straight over here because I love Florianopolis." When asked about competing in Round 1, Dantas stated, "Yeah for me it's totally different because I only surfed in one QS event this year at Pipeline, so I just felt that I had to surf a little extra so I could guarantee I'd make it into the second round. But it's all good."

Former winner of the US Open of Surfing, Hiroto Ohhara (JPN) displayed powerful surfing on his backhand to receive an 8.17 and a 6.40 on his two best rides for the highest heat total of the day of a 14.57. Alonso Correa (PER) advanced in 2nd place after a last-ditch effort over Jared Hickel (AUS) and Ygor Arakaki (BRA) who were defeated. "I'm so happy I got through that heat. I was so nervous to be competing in Round 1," said Ohhara. "I was looking for the lefts, and everybody else stayed on the rights, so that worked out great for me. I'm in the 60's in the ranking, so I want to get a good result here, then another good one in Hawaii so I can break into the Top 50."

Another surfer that exhibited a steady demeanor was Noe Mar McGonagle (CRI) who won Heat 12 after facing up against three Brazilians. Yuri Goncalves advanced into Round 2 alongside McGonagle, while Armando Lins and Matheus Navarro were eliminated from competition. 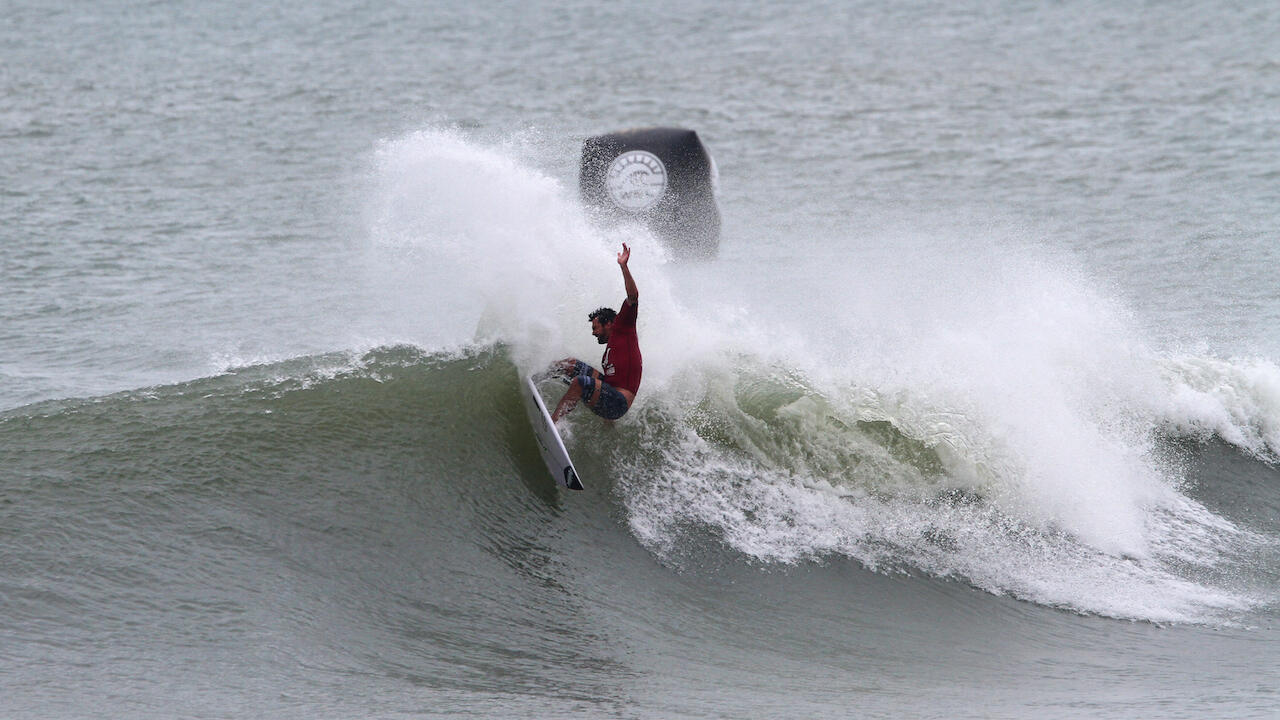 "The first heat is always good to wipe the nerves off, I felt good," said McGonagle."The waves are pretty tough today, but it seems like the inside is getting a lot better with the change in tide. My strategy wasn't to get a lot of waves; I just wanted to pick the right ones. I'm just stoked to get that heat out of the way and now I'm ready for Round 2."

When asked about facing three Brazilians, McGonagle said, "That's always how it is in Brazil. There are so many good guys and they surf so well in these types of waves. This is my second time in Florianopolis and it's a beautiful place, so I'm stoked to be here." 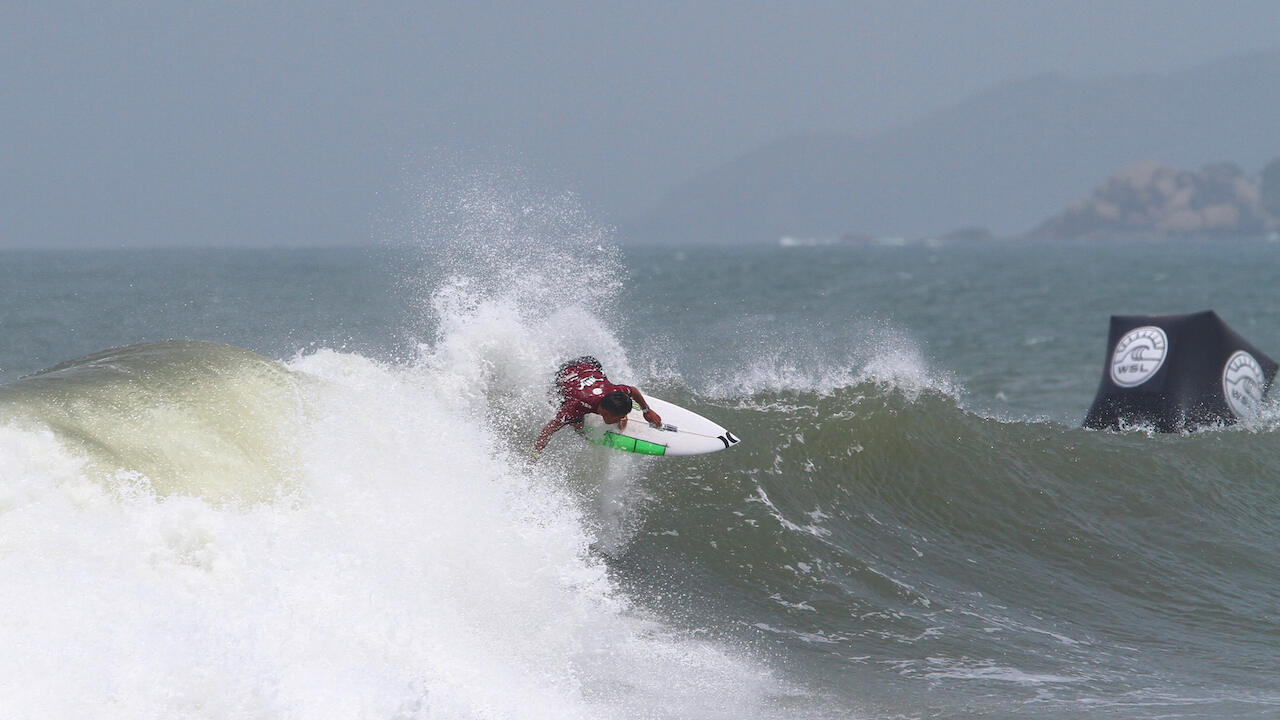 The surfers from France had an outstanding day as all five athletes moved onto Round 2 with Nomme Mignot (FRA), Nelson Cloarec (FRA) and Charly Quivront winning their respective heats. Tomas Fernandes (PRT) magnified the impact of the European crew after winning Heat 2 of Round 1.

"It feels great to win that heat. It was really hard to find the right waves, so I tried to keep busy in the beginning and I got two medium scores, so I think that was a good strategy," Fernandes said. "I only got one freesurf in before the contest because it's always so crowded, but the waves are definitely fun. It's really important for me to get a good result because I'm trying to make it into the top 100 in the rankings. I'm getting close and a good result here can make a big difference." As the final horn sounded the day's completion, a press conference was held which included the two WSL World Champions from Brazil Adriano de Souza (2015) and Gabriel Medina (2014), as well as Ian Gouveia (BRA) who is the highest ranked Brazilian surfer on the QS and the head of Hang Loose, Alfio Lagnado.

The Hang Loose Pro Contest is the final Qualifying Series event of the year before finishing off the year in Hawaii. The world's top athletes will either be fighting to solidify their spots in the rankings, or will be looking for a strong result to put them within grasp of their sought-after dreams to make it onto the WSL Samsung Galaxy Championship Tour.