A big day of ratings shake ups at the Vans World Cup - the second stop of the Vans Triple Crown of Surfing and final event of the World Surf League (WSL) Qualifying Series - tightened the qualification implications for 2017. The biggest upset of the day saw Samsung Galaxy Championship Tour (CT) rookie Ryan Callinan (AUS) jeopardize his qualification chances for 2017 after losing his Round Three heat to Adrian Buchan (AUS) and Koa Smith (HAW). The only way Callinan can make next year's Tour is if Jeremy Flores (FRA) or [Jadson Andre]/athletes/466/jadson-andre) (BRA) double qualify after the year-ending Billabong Pipe Masters. Frederico Morais (PRT) overtook Callinan for the 9th place spot on the Qualifying Series (QS) after a strong performance and smooth surfing secured mid-range scores and advancement behind Tanner Gudauskas (USA). Morais also knocked Kanoa Igarashi (USA), another CT rookie, and re-qualification hopeful Keanu Asing (HAW) out of the competition on his tear to the podium.

"I was so nervous, everyone's making heats," said Morais. "It depends on me. I don't want anyone to lose. I want to make heats and qualify for myself. So yeah, I'm stoked to make it through right at the end. Really close heat, really good surfers, but yeah Sunset was fun." 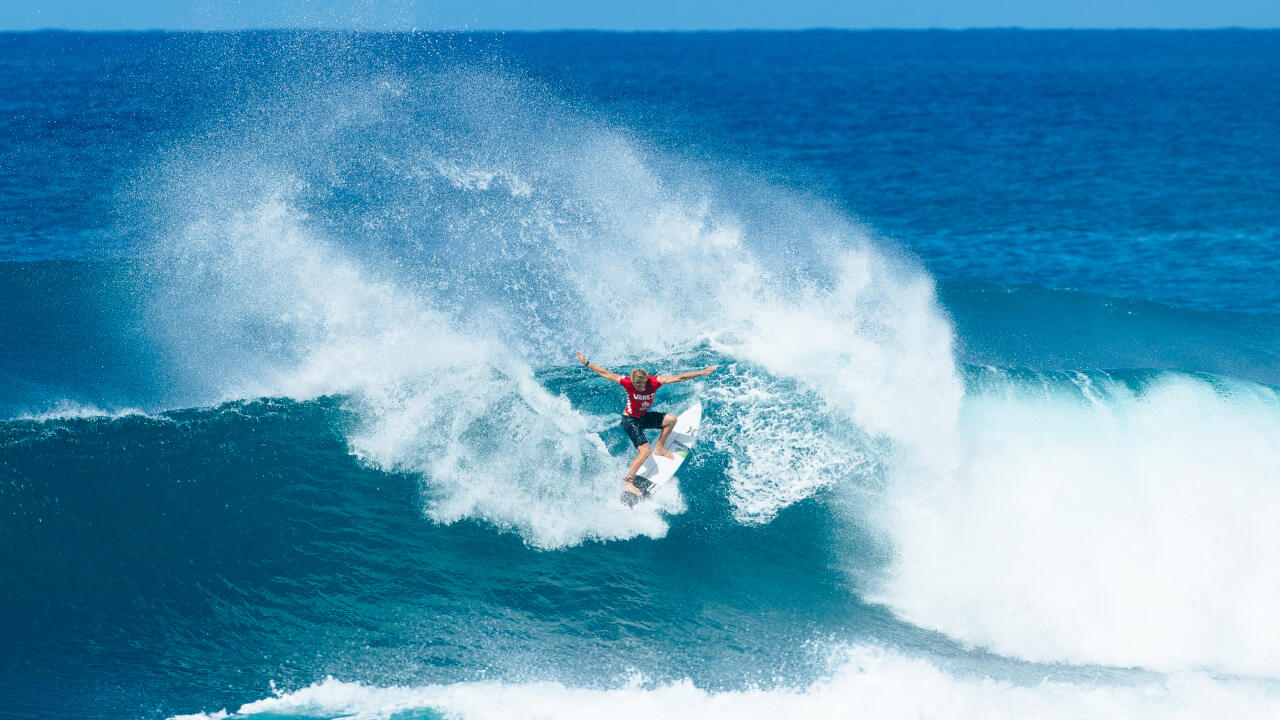 World Champion John John Florence (HAW) posted the highest single wave score of the event, a 9.77, for three aggressive turns and his signature loose style. His final maneuver was a carve off the face of the wave, which judges deemed an excellent capstone to the ride.

Florence was inspired to find this gem after Billy Kemper (HAW) posted a 9.07 on his opening ride in the heat to set the bar.

"Billy got that 9 and it was such a good wave," said John John. "It definitely motivated me a little bit but I was just kind of worried about myself out there and just looking for the waves I knew I wanted to get. I ended up getting one and getting a good score so I was stoked." "These three events are right up there with the World Title," said Florence. "It's crazy, they are such different waves. They can be big. Haleiwa can be 10 feet or 2 foot lefts. You have to be ready for anything. Same for out here, it can be small at the point or huge Sunset. You really have to be in sync with the ocean for these events. I'm fortunate enough to have grown up here and surf the point growing up and so it's a lot of fun surfing with no one out." Eleven-time World Champion Kelly Slater (USA) stayed active during Heat 11 and was one of the few athletes to hunt down a left at Sunset. His highest score, a 6.83, was for a right-breaking wave with multiple sections, but nevertheless was enough to see him advance in first ahead of Ethan Ewing (USA).

A win at this venue still evades Slater and with his last Vans Triple Crown victory in 1998, he looks hungry for another win on Hawaiian turf.

Ewing looks safe to qualify for his first year on the CT after a highly successful year on the QS and is also one of the few surfers left in contention for the Vans Triple Crown Rookie Award. O'Neill Massin (PYF) and Ian Crane (USA) are also fighting for the title. Jadson Andre (BRA) made a move up the QS rankings after today's performance and now sits in the 10th slot after a heat win and a couple successes this year. His best result came in Brazil at the Hang Loose Pro Contest this past November, a 2nd place finish behind Igarashi, and the feats continue here in Hawaii. He went up against an inform [Torrey Meister](@@athlete: (HAW) in Heat 10 and threw wave selection out the window by tallying up the most rides in the heat. But the Brazilian secured a 5.27 and 7.67 for advancement behind Meister.