Set aside all of the redundant and cliche references to "the womb" and "time slowing down" and just contemplate for a moment: how many other activities in life allow you to ride inside a living, breathing, heaving slab of liquid energy? Not surprisingly it's a pretty addictive sensation, and one that draws surfers to the North Shore of Oahu every year, where spinning caverns are easier to come by. Even an average day can produce, just like the last couple of "off days" during the Billabong Pipe Masters. Don't shed a tear for Zeke Lau and the unfortunate circumstances of his Championship Tour campaign, he's definitely not looking for your pity. He'll get his day on the Dream Tour, perhaps sooner than everyone thinks. The 'pencil drop' wipeout technique is a crucial survival tool at steep and shallow spots like Backdoor and Off The Wall. Griffin Colapinto goes over, pointy end down. Depending on whom you ask, the in-the-tube speed pump may or may not have been created by legendary tube maestro Shaun Tomson, but he certainly refined it to a science in the open barrels at Off-The-Wall. Kolohe Andino reinvents the past at OTW. With all of the media attention laser focused on John John Florence, Gabriel Medina has slipped under the radar in the chase for the Billabong Pipe Masters. With back-to-back appearances in the Pipe finals now under his belt, it would be unwise to overlook the 2014 World Champ this time around. Key elements of a speed blur: slow the shutter, stop down the iris, pan camera with subject. Check, check, check. Unidentified buzzes across a speedy wall. Hawaiian surf legend Tony Moniz organized and led a prayer circle on the beach in front of Pipeline as part of the opening ceremonies for the Billabong Pipe Masters in Memory of Andy Irons. Center, left to right: Lyndie Irons, Uncle Bruce and Axel Irons caught in a reflective moment. Far right, glancing toward the camera is Enich Harris, former Billabong USA Marketing Director and the man behind the new Andy Irons documentary. Life is good for Frederico Morais, the man his friends and Portuguese surf fans call "Kikas." Propelled by 2nd place finishes at both the Hawaiian Pro at Haleiwa and World Cup of Surfing at Sunset Beach he sits atop the Vans Triple Crown of Surfing rankings, 3700 points clear of second place John John Florence. And thanks to an injury replacement slot, he's seeded directly into the Billabong Pipe Masters and will get his chance at making history. Underwater images reveal the hidden importance of foils in surfing, from fins to rails to rocker, the influence of connectivity is paramount. Great designers are always looking for fresh inspiration. On half-day fishing trips off the reef passes of Fiji, master shaper Rusty Preisendorfer used to analyze blazing fast fish like tuna and wahoo and ponder ways to incorporate their fins into his designs. Dylan Graves, filleting a meaty Backdoor barrel. When World Champion John John Florence paddles out, photographers are sure to follow. While usually pretty reserved, Florence is comfortable on this stage, and doesn't mind strutting his stuff on the Backdoor runway. 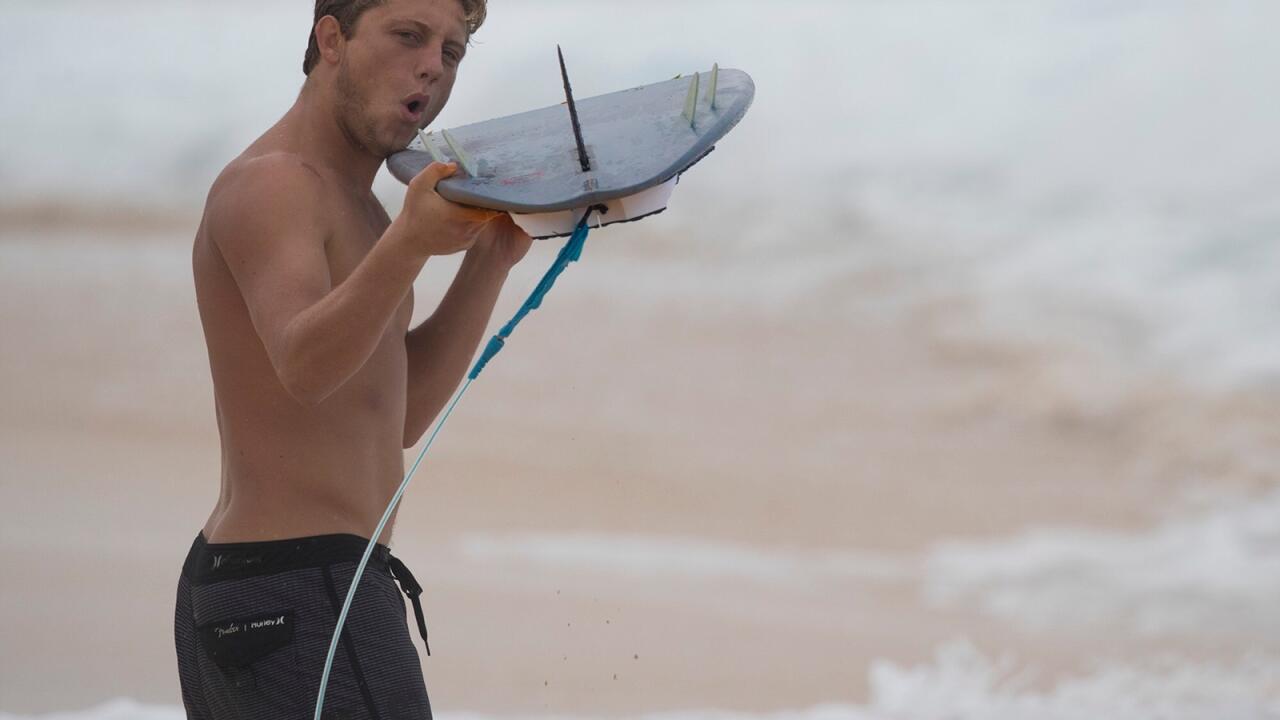 We can all thank the Campbell Bros.-- Duncan and Malcolm --for inventing the Bonzer three-fin design back in the early 1970s. Their current collab with Channel Islands surfboards, called "The Bonzer5 Shelter," is experiencing a renaissance via another pair of brothers from the Ventura/Santa Barbara region, Conner and Parker Coffin (Parker shown here). Crazy for more Bonzer? Next time you visit the North Shore go get breakfast at Cafe Haleiwa. The Campbell Bros. restaurant in Haleiwa is like a shrine to their muse. Say what you will about the high-performance aspects of single fins, they do force you to draw out your turns and put it on rail. Parker Coffin, laying it all out.