The inaugural Nazaré Challenge was an eye-opening affair for a variety of reasons, some more obvious than others. During the course of Tuesday's heart-pounding competition we learned quite a bit about the current state of big-wave surfing. The following five topics dominated most of the post-event discussion in Portugal. It's hard to think of a vantage point anywhere in the surf world that expresses the raw power of the ocean more than the cliff at Nazaré. - WSL / Laurent Masurel

In terms of fan appeal, big wave surfing strikes an unmistakable chord whatever the level of involvement exists for the spectator. You don't necessarily need to have invested decades as a die-hard surf fan to get a handle on what's going on -- there's a tiny speck of a human teetering atop a mountain of water, making a split-second, potentially life-or-death decision. It's a sporting risk/reward scenario at its most awe-inspiringly beautiful. 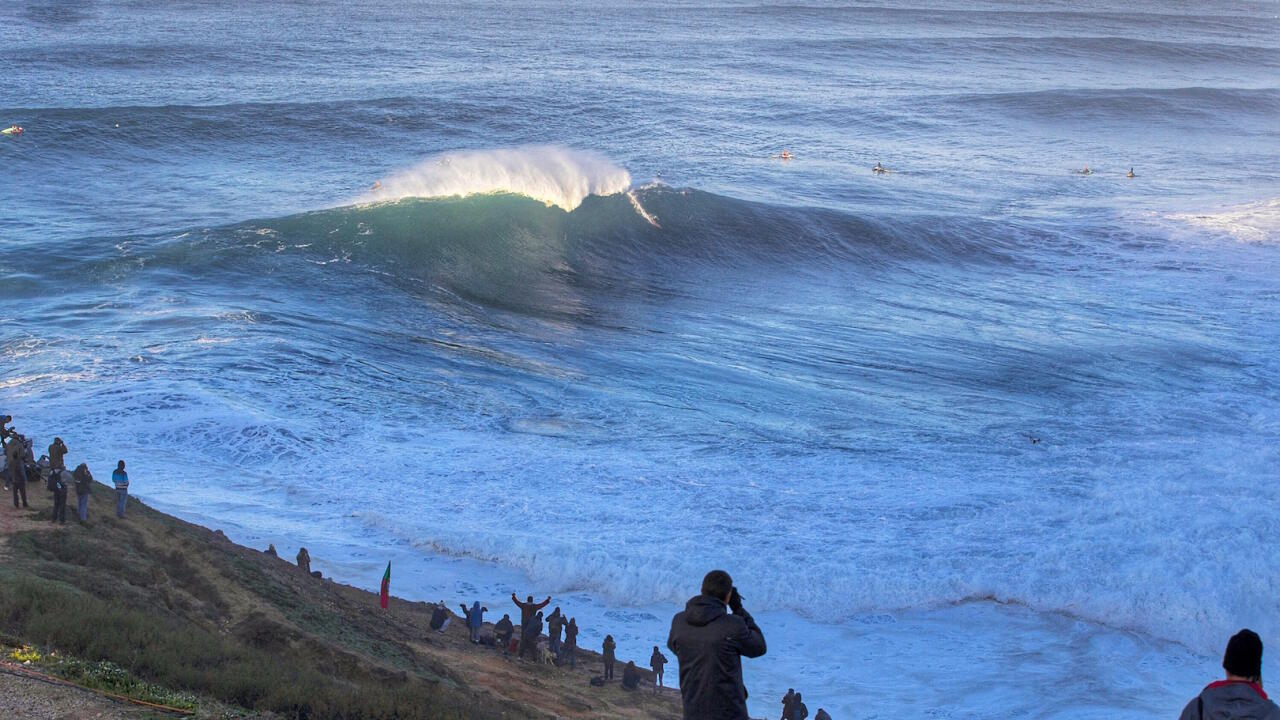 As gladiator pits go, Nazaré is right up there on the intimidation scale. - WSL / Guillaume Arrieta

With a packed crowd lining the iconic clifftop since dawn, the atmosphere at Nazaré went through a palpable change throughout the day, almost a kind of danger fatigue. Whereas spectacular wipeouts were met with whoops, whistles and hoots in the earning morning, by early afternoon the assembled masses were pretty much watching through their fingers. You could sense the collective fear, an understanding of the gravity of the situation. The fact that the crowd had a grandstand view from above, watching the drama play out beneath them in a colosseum-like arena only added to the effect.

By the time the second Semifinal was drawing to a close, it felt less like partisan support for their chosen winners and more of a communal hope that everyone would make it out more less in one piece and back to their families for Christmas. Mercifully, they all did. Cristian Morello gets yanked out of the zone. - WSL / Laurent Masurel

2. PWCs Can Be Double-Edged Swords

Nobody will ever doubt the utility of personal water craft to big-wave surfing. Without them, events like the Nazaré Challenge wouldn't even be thinkable, let alone feasible. Aside from their paramount importance as lifesaving devices, they provide a logistical solution that avoids the scenario of watching surfers caught inside and paddling for entire heats. But that very function in recycling surfers back to the lineup also comes at a price in the form of multiple beatings in a very short space of time. At times, what we saw at Nazaré was surfers falling, getting pummeled, jumping on the sled and being back in the lineup stroking into another giant wave a minute later. If that cycle was then repeated and re-repeated, competitors were taking more breathless underwater punishment in five minutes than the human body was designed to endure in an entire lifetime. Joao de Macedo, Christian Morello and Nic Lamb come to mind for getting multiple horrific drubbings with sickening rapidity, like North Atlantic nuclear rabbit punches.

Even the ski itself can be dangerous, turning from rescuer to aggressor in a heartbeat, especially at a spot like Nazaré that has nothing even resembling a permanently navigable channel. When Garrett McNamara flipped his PWC with Damien Hobgood clinging to the sled, the resulting wipeout left the Floridian unfit to take his place in the lineup to contest his Semifinal. It also sent G-Mac back to terra firma to watch the rest of the day from the cliffs. Big-wave events like Nazaré wouldn't even be thinkable without PWC assistance, but they can also serve up difficulties of their own. - WSL / Laurent Masurel

Willard Bascom famously wrote in his seminal 1962 text Waves and Beaches "The shifting battleground is the surf zone, and two combatants, waves and beaches are the heroes." True enough. But anyone with even a couple of physical oceanography classes under their belt understands the basic governing premise that an open ocean swell will generally produce a coastal hero slightly more modest in stature than his full-size pelagic counterpart. Sure, certain spots "photograph bigger" and certain reefs will amplify the swell, but the numbers at Nazaré defy all logic -- and sinusoidal wave theory. The crucial numbers for Tuesday's swell? Significant wave height of 8-to-12 feet at 15 seconds. The resulting surf? Thirty-to-forty feet. 4. There's No Substitute for Experience

It's something of a sporting cliché, dished out from ballparks to beachbreaks but never would the importance of experience ring more true than at Praia do Norte. While the essence of surfing's -- and especially big-wave riding's -- skill set is a core of transferrable methods and techniques, it's hard to think of a situation where previous intimate knowledge can be more valuable than at arguably the most obstinate, capricious big-wave break in the known universe. If it's not the trickiest lineup in surfing, it's only because the place kinda doesn't really have a lineup. Take the inaugural Nazaré Challenge Final, for instance. It featured two Portuguese locals -- a pair of surfers not exactly unheard of outside the global big wave brotherhood, but hardly household names either. Then there's runner-up Carlos Burlé, who'll turn 50 soon and pretty much lives at Nazaré half the year. The Brazilian has been on hand, either driving a safety ski or surfing (or both) at almost every major swell here in recent memory.

Event winner Jamie Mitchell, meanwhile, came and made his study of Praia do Norte almost exactly a year ago, during a swell that served as an ideal dress rehearsal in nearly identical swell conditions, winds, water temperatures and weather. Mitchell learned the kind of lineups he needed, figured out the waves he wanted, and more importantly, the waves he didn't want. And didn't it show. Trevor Carlson takes in the wide-open view after rounding the corner at Nazaré. - WSL / Laurent Masurel

When it comes to getting recognized as a serious big-wave break there are always barriers to entry. Doubt and resistance is heaped on every new big-wave discovery. The pantheon of big-wave breaks is tightly guarded by a kind of radical orthodoxy of traditionalists. The Atlantic can produce big waves, and Continental Europe has big wave breaks, sure, but they've often been seen (perhaps more by armchair experts than those that actually tackle them) as more slopey, less radical than some of their celebrated Pacific counterparts. Not surprisingly, Nazaré has had its share of detractors who chiefly accuse it of not throwing top to bottom or not fully breaking. Moreover, the coastal geography can at times increase such doubts, with the typical angle it's shot from, far above, tending to flatten the wave face. If anyone still harbored such misgivings after Tuesday's events, and for any reason missed the live broadcast, let them refer to the highlight packages or the substantial casualty list. Lest they're still unconvinced, let them reflect on the testimonies of some of the most respected watermen to have ever graced the sport -- Nazaré is a beast to be respected and feared.

2018 Ride of the Year Entry: Tsunami Crew at Nazaré, Portugal on November 8, 2017. Angle 4. Video by Cesinha Feliciano by Canal OFF.