Competitors awoke to more pumping conditions at Huntington Beach to contest the remaining Round Two heats, as well as finish off the Round Three battles. - WSL / Mike Moir

The men's Shoe City Pro QS1,000 continues to score ideal Huntington Beach conditions that held for the better part of a full competition day. The field has been reduced to 16 surfers all gunning for their spot atop the podium -- which will be decided by day's end Sunday.

Local hero Brett Simpson came out firing in his Round Two debut with a heat win and backed it up with a Round Three victory later in the day. The former Championship Tour (CT) competitor still has the desire to find his way back onto the elite level as he returns to the QS in hopes of doing so. Simpson found himself surfing against two sons of the sport that brought back some nostalgia during his heat

"I miss competing, it's been a while since Hawaii and I had a terrible heat at Sunset. It always feels bad to end that way, and you want to get back on the horse. The last couple of months I've just focused on getting better and getting equipment right. The waves have been small but I've been surfing a ton and I feel good." 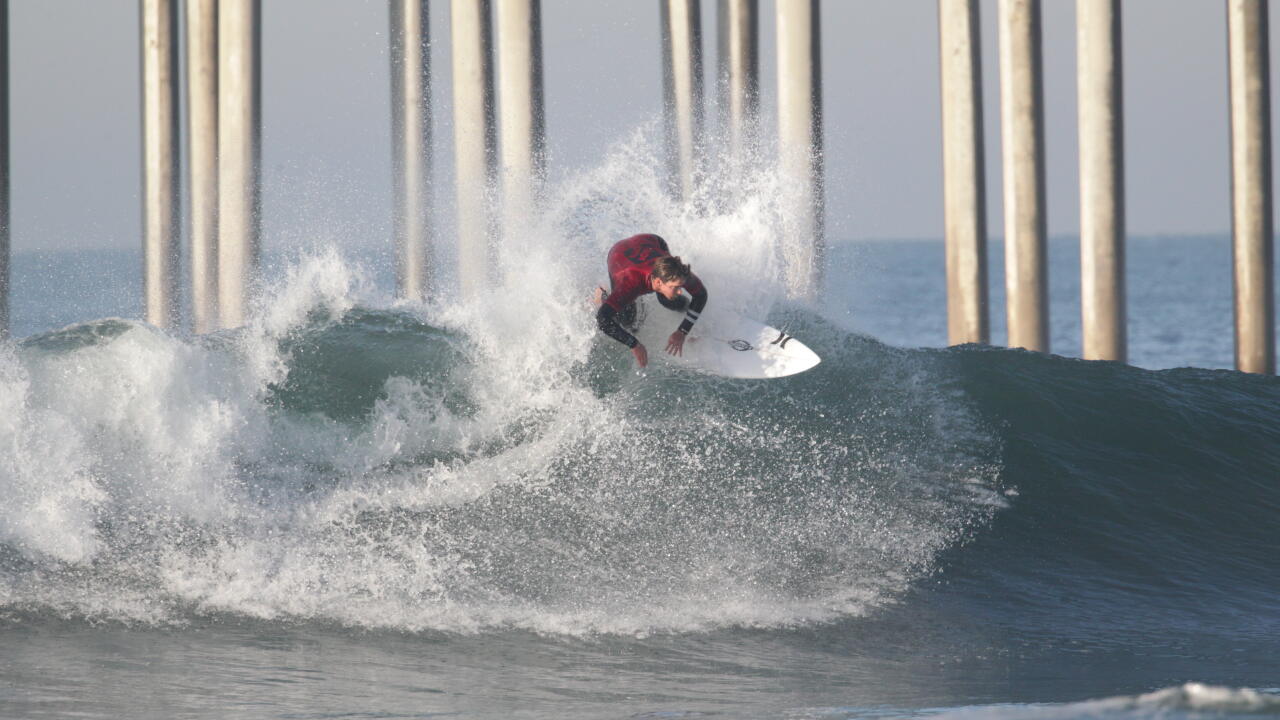 "It's nice to jump out and surf with some second generation guys like Noah [Beschen] and John [Mel], I was pretty much surfing against their Dads when I started. It's great to see the up-and-coming kids and for me to keep that fire of getting back on tour. Every heat nowadays, it's always hard. I'm just trying to get in the mind frame of winning, which is hard when you have slow heats or tough heats." Ian Crane picked up right where he left off yesterday in his Round Two win and stole another big victory in Round Three today -- posting one of the few excellent scores on offer. The San Clemente native found his mind space and put it into effect as he moves into Round Four with plenty of steam.

"I feel a little bit more aware that I'm in a heat and not just surfing. If I was just surfing I probably would've been closer to the pier and catching one hundred waves, but instead I only caught three waves in that heat. I'm definitely trying to be smarter in that way because I've lost a few times like that. I'd win heats and then do something dumb off in the corner while letting my competitors sit where the waves are the best. If I can just not do anything like that I'll be stoked to keep moving on." Griffin Colainto's runner-up at the World Junior Championship didn't translate to QS success just yet with a Round Three elimination. - WSL / Matt Moir

But, not all the top seeds survived the day as the explosive talent of up-and-comer Griffin Colapinto was taken out in Round Three after a big Round Two win. No waves came through that offered the fellow San Clemente surfer a chance to showcase his dynamic attacks and will put his focus toward the next event. In his debut Round Two battle, Jake Kelley emerged with a huge win and continued that success into Round Three with another victory. Kelley stuck to the same formula to begin his 2017 and it's paying dividends thus far with a crisp backhand attack. While his homebreak of Nomad's was flat most of the winter, Kelley kept busy abroad and took full advantage of the Christmas swell on offer back on the West Coast.

"It feels good to get something going to start the year after just spending time in the offseason surfing a lot and getting my boards dialed," Kelley said. "I stayed busy probably when I shouldn't have been in that last heat. I kept falling, but got lucky when some sets came to me and I was able to surf them well. It helps to stay fresh and stay on top of my game being in Hawaii for a while over the winter, it's so nice to finally have waves here again." Colt Ward got off to a great start to his 2017 campaign with a massive Round Two performance and earning a spot into Round Four behind Jake Marshall. The goofyfooter didn't have the dream run he would've liked in 2016 as a full-time QS competitor for the first going, but knows what it will take for him to excel.

"Last year I don't think I made it out of a Round Three all year with a rough go at it so even though it's just a QS1,000 it feels good get some momentum going and into the last day. I'm just training a lot harder and smooth out my surfing. Also just surf more, especially coming up against the bigger guys in the higher rated events you really have to mature your surfing. So that's the main focus is to just keep progressing and keep getting better."

The 20-year-old Californian has spent two years on the QS grind but earlier this month he found breathing room at Cocoa Beach.