Vastly different breaks are on offer from what the WLC surfers contest in at Hainan Island, a lefthand pointbreak, to now competing at a righthand reefbreak at Tupira. But, the 2016 Women's Longboard Champion is prepared to take on foreign lands in an effort to stay on top. WSL: With a World Title already in the books, what's the motivation to remain No. 1?
Tory Gilkerson: Being number one definitely makes me want more. Right now I'm at the top and I really want to stay there! It's a nice feeling and I think I'll try to keep it going for as long as I can, I can't wait for this event.

Can you describe what it felt like coming out of the water at Hainan Island a World Champion?
When the final hooter blew and I became the World Champ I couldn't really believe it. That day started with my Quarterfinal heat, and when I woke up that morning I had no idea that I could become the World Champion that day. When I won, it was like a whirlwind that came to a beautiful and jaw dropping halt. I was overcome with so many emotions -- tears, laughs, smiles, screams, all of it, and all at once. It was so cool getting to the beach and feeling the love and support of my friends and fellow competitors. What were some of the biggest challenges claiming your Title, and what can you expect at PNG?
Hands down [it's] all the girls in the competition. The level of surfing has gotten so high over the years that I truly believe that over half of us have the potential of winning. It really comes down to confidence and consistency and any of us can make it or break it any given day. It's going to be interesting to be at a new venue with almost opposite conditions compared to where I won. But, we are all in the same boat so it will be good to have a challenge and see how everybody performs.

It really comes down to confidence and consistency and any of us can make it or break it any given day. It will be really fun and exciting to have a bit of a Title race unfold...

What does this event mean for the World Longboard Championships through your perspective?
On the longboard Tour, we've only had one Championship event every year, so it's great to see a little more events. It will be really fun and exciting to have a bit of a Title race unfold at multiple events. 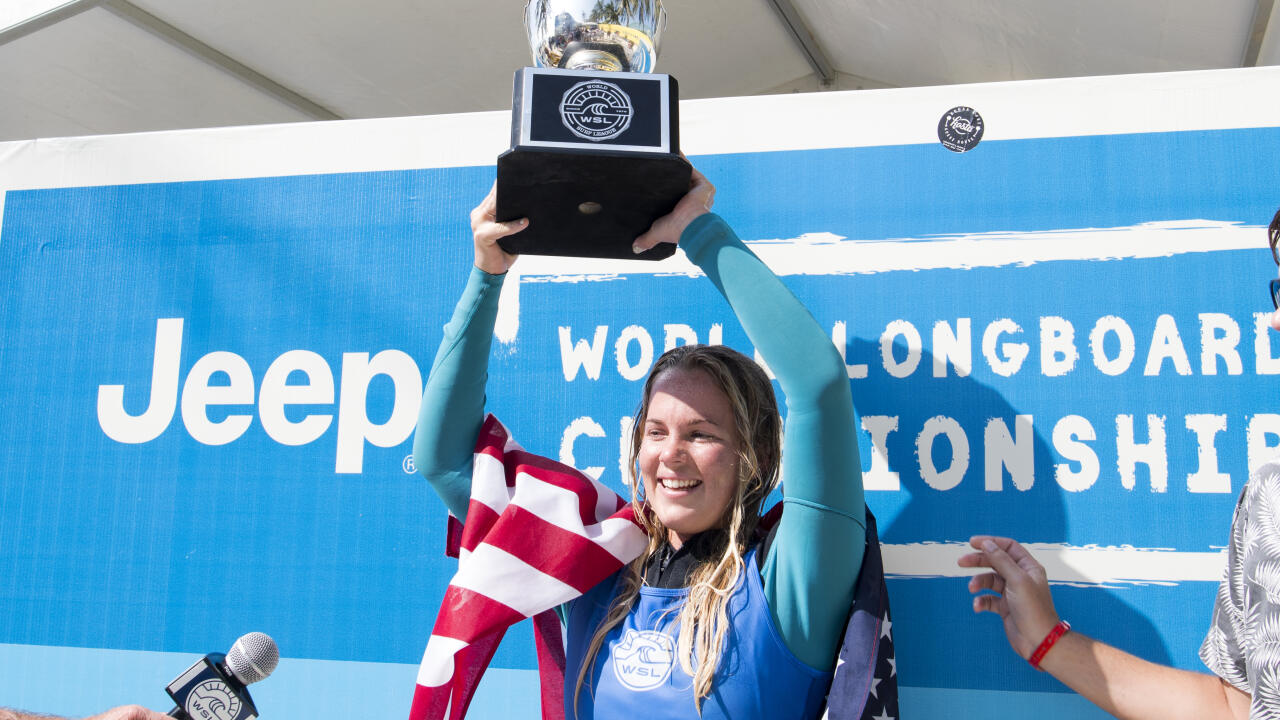 Looking back on your 2016 year, what were some key factors that you're hoping to replicate in 2017?
I trained very hard, got my mind in the right place, and just was overall happy and in love with surfing. Most days in the four months leading up to the Championship would consist of a surf in the morning, work, then the gym or yoga at night. Gilkerson would like to be standing in the same spot next March at the WSL Awards -- with a second World Title in hand. - WSL / Kelly Cestari

I felt really strong and in rhythm because of my routine. My boyfriend, Jared Neal who competes in the men's WLCT, played a big part in getting me focused mentally. He's always been very supportive and confident that my surfing could win me a Title one day. It was all about just staying calm and believing that I could do it if I just surfed and had fun.

How great is it to have kept the Title in your hometown, following Rachael Tilly's success in 2015?
It's pretty cool to keep the Title in San Clemente, the town really supports their surfers. Growing up in SC everyone knows everyone and most people surf, so it makes us all proud when one of us accomplishes something great. I could really feel the town behind me when I won, with all the facebook messages and comments and local newspaper articles. I'm so stoked that I could bring it home for everyone last year.

Gilkerson's quest to reclaim a World Title begins this Saturday, March 18 at the beautiful righthand reefbreak of Tupira, PNG.

Pristine waves at Tupira, world's best longboarders, and one of the most progressive sustainable surf tourism models in the world.