A beautiful Tupira sunrise lit up the lineup for the world's best women longboarders, with the first batch of eliminations in the books. It was a day of big performances and a massive upset which saw reigning World Champion Tory Gilkerson eliminated from the proceedings here in Papua New Guinea -- leaving the yellow jersey up for grabs on the Tour's next stop in Taiwan.

2015 World Champion Rachael Tilly continued her winning streak with a buzzer-beater to overcome heat leader and fellow Californian Kaitlin Maguire -- after Maguire stole the lead from Tilly earlier in the heat. Tilly exercised great footwork and a solid finishing turn for the win. Top-perfomer Justine Mauvin was eliminated. Rachael Tilly all smiles heading into yet another Quarterfinals on the WLC stage. - WSL / Andrew Nichols

"I went into that heat a little more nervous than I would've liked even though I've been feeling really confident in my surfing," Tilly said. "Looking at the draw, Justine [Mauvin] and I have had some battles, and I've been surfing against Kaitlyn [Maguire] since I was young so I knew her capabilities -- I knew it was not going to be an easy heat. Unfortunately I love getting those buzzer-beaters, it stresses me out, as well as my family when they're watching, but I've learned to stay calm until the very last second of the heat." Tilly and Maguire's American compatriot, Lindsay Steinriede, dominated her Round Two matchup with Atalanta Batista and posted the event's highest single-scoring wave, a 9.50. Steinriede added to that near-perfect score to earn a massive 18.23 heat total before earning runner-up in her next matchup against 2016 WLC runner-up Chloe Calmon and Nava Young. 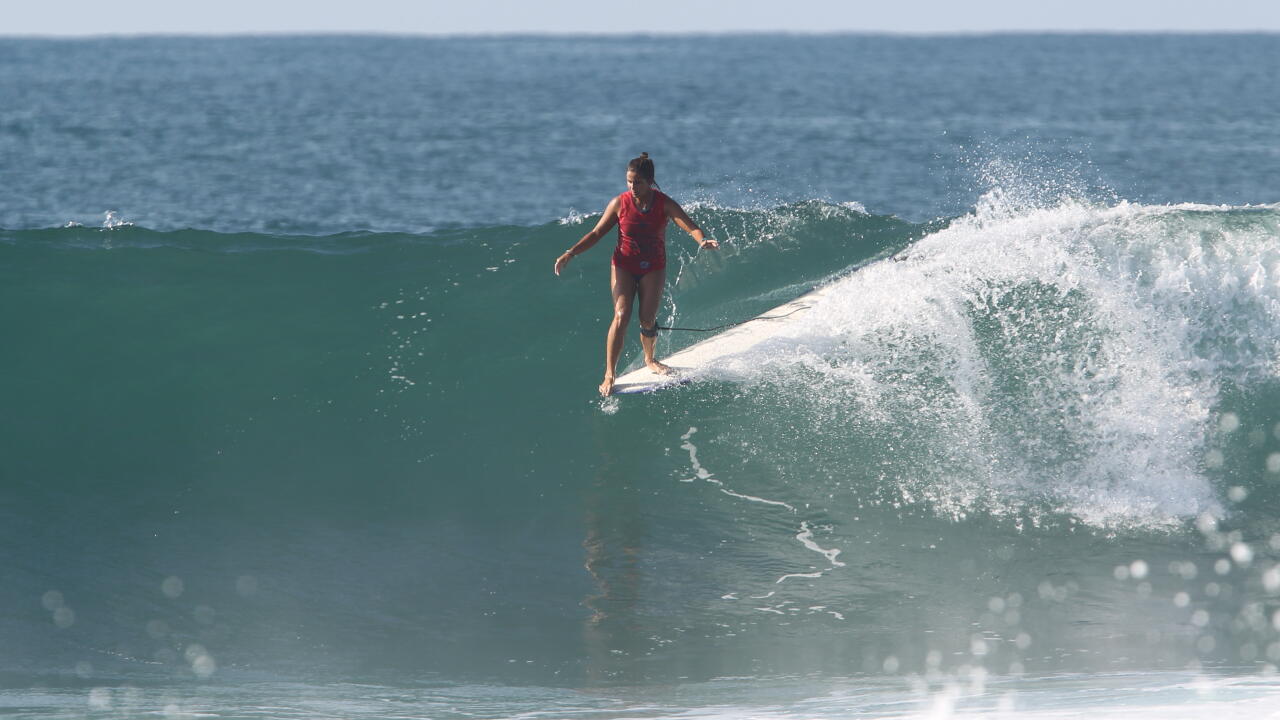 Calmon made her way through the first batch of eliminations in Round Two and then showed her true form later in Round Three. The Brazilian has yet to earn her first-ever win on the Longboard Tour and, after the display put on in Round Three earning a 9.27, looked to be well on her way. The marathon day proved heavy on her equipment, but Calmon remained optimistic with a Quarterfinal appearance.

"I knew it would be a tough heat after Lindsay [Steinriede] got that 9.50 in her last heat so I knew I had to stay relaxed and catch a lot of waves to keep improving my scores," Calmon said. "I felt good staying busy and when I got that nine I was a little more relaxed, but you can't be too calm out there until the final horn with these girls surfing so well -- so stoked I made it through. In my Round Two heat I twisted my board so I had to fix it about twenty minutes before my heat, but I'm so confident in this board and want to keep riding it in this contest." Former World Champion Chelsea Williams displayed her dominance in Round Three after she survived a Round Two matchup with Victoria Vergara. Williams put the field in a combination situation and had defending World Champion Tory Gilkerson in a fight for an advancing position. But, it was Crystal Walsh who came out over Gilkerson and the yellow jersey will be redistributed heading into the next event.

"That felt so good to get a win this morning and then to back it up with that heat feels even better," Williams said. "It was such a stacked heat that we all had to leave everything in the water for the top two to advance and I'm bummed to see Tory out, but stoked for Crystal at the same time. I'm stoked that everything went my way and to get some momentum back heading into the Quarterfinals so now it's just about getting the job done there." Honolua Blomfield fired on all cylinders once again with her second heat win of the event and a Quarterfinal berth. The Hawaiian was in a stacked heat that included Round One standout Alice Lemoigne and Kingscliff Champion Natsumi Taoka.

"That was a nerve-racking heat going against those two girls since both of them ripped in Round One," Blomfield said. "But, I'm feeling really confident out there on my forehand turns and trying to find those hang-tens if I can -- except it was really bumpy in our heat with wind so we were pretty limited. I'm just so stoked to keep moving through this event after making a last-minute decision to come here and compete. Hopefully I can keep it going and come away with a big result."

Tune in live tomorrow at 7:00 a.m. AEDT to witness more action from the world's best at the beautiful wave of Tupira