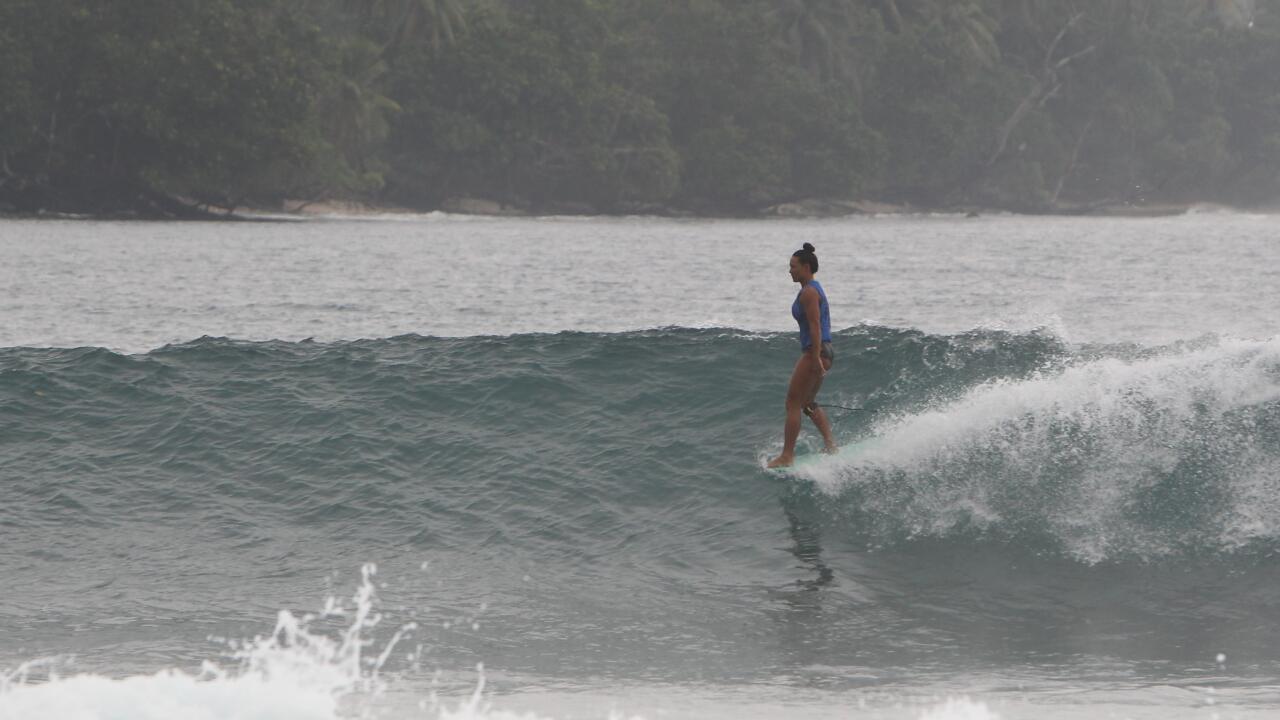 Friday in Papua New Guinea, the inaugural men's and women's Kumul PNG World Longboard Championships will crown their first-ever champions. For the women, it will be a maiden victory for whomever comes out on top after another day of upsets.

The shakeups began early on after Crystal Walsh dispatched 2015 WLC World Champion Rachael Tilly from competition in dramatic fashion to start the day -- and to claim some revenge after Tilly topped her for the 2015 World Title. Once Tilly earned an excellent 8.27 in response to Walsh's lead-changing 7.37, the former World Champion looked to be on her way to another Semifinal appearance. But, in the final minute, Walsh took full advantage of a lat wave with beautiful footwork and sweeping turns for a 9.00. "I've met up with her a few times since then as well and never come out victorious so going into that heat I was a little nervous with that in the back of mind," said Walsh. "But, I wasn't going to let that throw my game. I could hear the commentator give the one-minute warning and I saw that wave coming, and it was a bomb. I just pulled it together and gave it all I had and it worked out -- I'm so pumped." That kind of drama continued into Quarterfinal Heat 2, as Kaitlin Maguire defeated former World Champion Chelsea Williams with a brilliant performance. Maguire trailed in need of a near-excellent score for most of the heat until a 7.17 lowered that requirement. The Californian, however, wasn't done yet, and found a 5.97 in the dying minutes to overcome Williams and hold on to the lead until the buzzer sounded.

"That was such a hard heat against Chelsea Williams, my nerves were out of control out there, but I held it together and I'm just ecstatic to be moving on," Maguire said. "[Staying in the pocket] is just something I've always done, I wouldn't say I've changing my style of surfing since I was young -- I was taught by a lot of the guys to just stay as deep in the pocket as possible. Over time I've tried to put myself in the most critical section of the wave and not be out on the shoulder so that's just something that comes naturally to me these days." Chloe Calmon, the 2016 WLC runner-up, put an end to the upsets and locked in her Semifinal appearance on the WLC stage once again, this time over an in-form Alice Lemoigne. Calmon progressed as the last remaining goofyfooter in this contest and will try to win her first-ever WLC event on her backhand tomorrow.

"That was such a great Quarterfinal with just Alice and me in the water and trading fun waves -- the only thing I don't like is coming up against good friends," Calmon said. "But, that's competition life and you have to be used to it. I'm so excited to move on and it seems like I'm getting more comfortable with this wave each time out and I'm confident in the board, as well as myself.

"I'm just enjoying every moment here, we're having a pretty amazing experience here in PNG. Outside the contest everyone's friends and these are friendships that I can see lasting a lifetime." A clash of the titans unfolded in the last Quarterfinal heat, which featured Honolua Blomfield as the higher-seeded surfer taking down Lindsay Steinriede with yet another 9.00. Blomfield and Steinriede came into their matchup with a combined five excellent scores (8.00 or better) and lived up to the hype as a heat to watch.

"That was so fun, I can't believe this wave is still as good as it is even with though it's a little smaller than the last few days," Blomfield said. "Lindsay's been on fire this event and I knew I'd give everything to beat her in that matchup. I'm over the moon to make a Semifinal at a CT event and really make a run at the Final tomorrow. I think something that's been a big help is knowing reefbreaks really well and being used to a powerful wave."

Tune in for the final day of competition tomorrow morning at 7:00 a.m. AEDT as two champions will be crowned at the first-ever Kumul PNG World Longboard Championships.