‘Stephanie surfs too good for her own good," Tom Curren confessed, almost precisely a decade ago in early 2007, on a boat trip to Micronesia with the then 19-year-old Tour rookie and a boat full of journalists, including this one.

Steph on Stepping Up
0:56
The 6x World Champion talks about digging deep, and the women motivating her to press forward.

It was eyebrow-raising, forthcoming fare from a demigod who was known to be as economic with praise for the sport's up-and-coming starlets as he reputedly was with paying for dinner.

But perhaps even more notable than that, was the particular skill set with which the ‘86, '87 and ‘90 World Champ was smitten: the Gilmore style. Because for a sport that recognizes greatness in its athletes for a multitude of attributes, from charging to progression, power to aggression, there is none more coveted by the surfers themselves than that pertaining to style. With a fan in Australia. - WSL / Jack Barripp

Languid, liquid, every bit as easy on the eye as the Gold Coast points on which she cut her teeth, it was Gilmore's effortless line that instantly won hearts and minds, rather than the almost inevitable World Title trophy haul that was sure to follow.

Surfing's greats have always come in various shapes and sizes, garnering infamy for summits achieved and outrageous lives led, each generation throws up leaders in the arts of boundary-pushing. But precious few can ever hope to become instantly recognizable in mid-face trim. Wave riding's ultimate mass-appeal iconography, a surfer standing next to a wave, somehow communicates something resonant in the collective sub-conscience, as if tapping into the zeitgeist without the need for arm-twisting the masses with narrative coercion of staggering achievements or compelling back-stories. As the ever-deferential six-time World Champion herself is keen to point out, before Gilmore, women surfers had been elevating the sport at an almost-exponential rate. Layne Beachley was a competitive animal, Rochelle Ballard and Keala Kennelly redefined women's tuberiding and charging, while Lisa Andersen universally garnered the covertly backhanded -- if well-intentioned -- compliment, "She surfs like a guy." 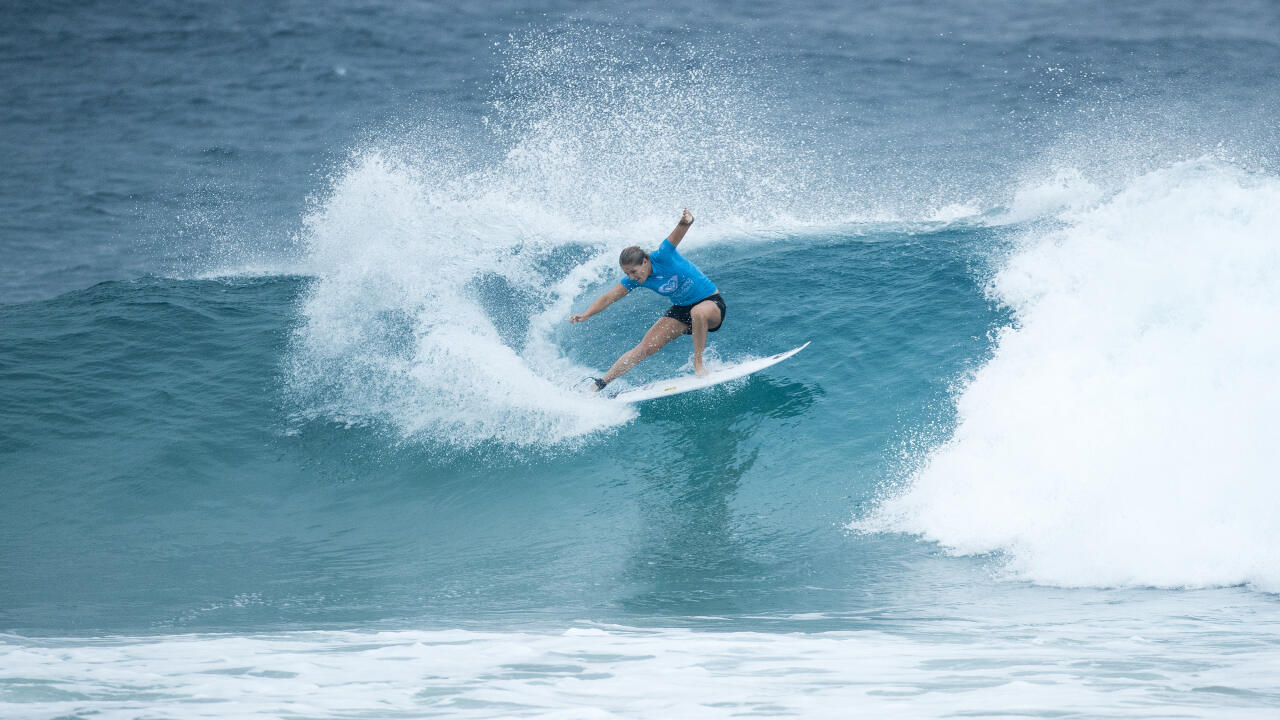 The Queen of Snapper Rocks, in action on home turf. - WSL / Kelly Cestari

But if Gilmore has made just one mark, her singularly qualitative achievement has been to render the last comparison antiquated. She doesn't surf at some fraction of, however impressive, that of the the leading male of the day.

Her surfing has never chiefly been about pushing performance toward catching-up or comparing favorably with male counterparts, essentially a moot point, a punditry dead end. Style out the water, too. - WSL / Daniel Ridgley Hewitt

Suddenly, women's surfing would be revered purely on its own beautiful merit.

The Gilmore brand -- effortless, easy, natural -- is how the public at large better understand our sport's greats. It's revealing that her own sporting idols include chiefly, Roger Federer, the Swiss who's won 18 majors seemingly without breaking a sweat. No coiled spring ("If it's flat, I'm not going to do a 100 sit-ups") vicious intent, no sinew-straining, target-crushing, vein-popping salt water workout toward triumph and silverware. Hacking up an unsuspecting wave at Lowers. - WSL / Sean Rowland

Perhaps that's in part why she's become a celebrity phenom in her own right, exuding the kind red carpet sheen reserved for only precious few in any sport, a kind of A-lister glow that no amount of reality TV or promotional work can achieve. Transcending the sport like Slater, taking wave-riding to all new audiences, all done with characteristic flow, style, ease.

Modern surfing is as a broad a church as it has ever been, boasting a multitude of stars and personalities, each loved for different reasons. But whether Stephanie Gilmore fails to win another World Title -- or if she goes on to win another six- - you suspect that when all is said and done, and the passage of time is allowed to pare back the hyperbole, the freewheeling, guitar-strumming naturalfooter from Tweed Heads will always be paid the highest compliment of them all.