A giant swell and strong crosswinds did not prevent the competitors in the Jordy Smith Cape Town Surf Pro pres. by O'Neill, from producing excellent performances in what can only be described as victory-at-sea conditions on the opening day at Melkbosstrand, north of Cape Town, on Thursday.

With whitewater from the beach to the horizon, Tubewave maintained its shape with the waves reforming on the inside and providing those with paddle power and resolve the opportunity to rack up scores in the excellent range -- over 8.0 points out of a possible 10.

Daiki Tanaka showed the way in the second heat, opening his account with an 8.0 before adding and even better 8.83, and then closing out the 20-minute encounter with an action-packed ride that earned a near-perfect 9.33, to deliver the highest heat total of the day with 18.16 out of 20. 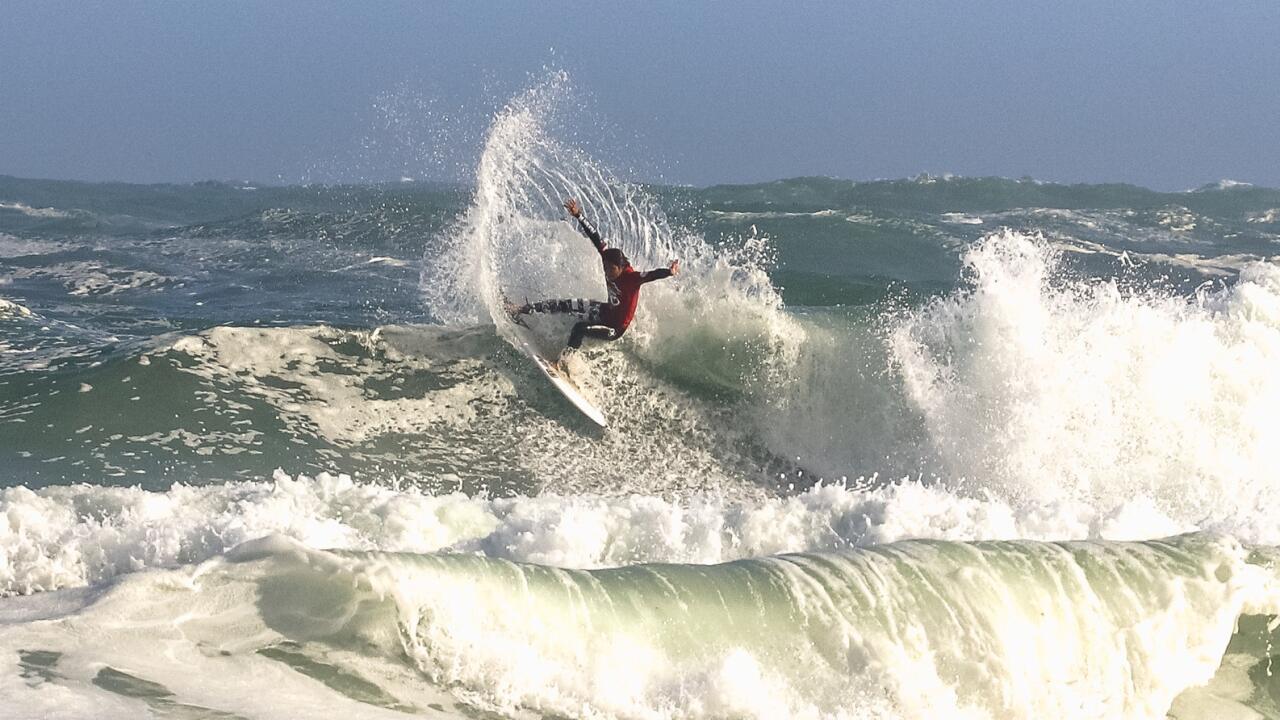 Liam O'Brien, competing in just his second overseas Qualifying Series (QS) event, was another to pack two excellent-range scores into his total, coming up with the second highest total of the day, 17.73, that included a 9.23 and an 8. 50. This left his three opponents in a combination situation, needing to replace both their counting scores.

"That heat went really well. I couldn't hear the scores out there but I managed to find myself on a couple of fun waves, and it looked like everyone got a few," said O'Brien. "It was just a good heat, plenty of exchanges and I'm stoked to come out on top. This has been a really good trip, South Africa is such an amazing place for waves, so diverse. I went up to Durban for the 3,000 and it was fun there, warm water and beach breaks But here its colder with plenty of raw ocean power - it's been good to surf all the different conditions in the first two QS events I've done overseas." Cristobal De Col was another who enjoyed the powerful Cape waves and felt really at home in the conditions to advance to the next round.

"I made it through so it was a good heat for me," said de Col. "The conditions are really tricky, it's very consistent but a real mess out there. I really love the power of the wave and the shape, it has a big wall. It's my first time in Cape Town and I'm loving it. I love the vibe of the people and it feels like home -- like a real family vibe.

Powerfully built South African Dale Staples had fun in his heat and was happy to advance to the last 64 in the event as he prepares for the Championship Tour event at Jeffreys Bay after winning the wildcard in solid surf at Supertubes earlier this month.

"Its super fun, there are really nice double-ups coming through but it's a lot of paddling because of the bigger swell coming through and the wind," said Staples after winning his heat. "I've doing really bad in the local series, but I'm looking forward to the J-Bay CT, so it's good to get a couple of warm-up waves for that. You usually have to get used to the cold water in Cape Town, but it's really warm today, warmer than the air." Organizers completed the 16 heats in Round One of the men's event on Thursday and will continue with Round Two, where the top 32-seeded surfers in the event enter the fray. All eyes will be on local hero and current world No. 3 Jordy Smith, who will be coming up in Heat 8 at approximately 11 a.m..

While he is the event sponsor, along with multi-national surf equipment O'Neill, Smith faces serious competition from the likes of former Championship Tour surfer Alex Ribeiro, who won the QS3,000 event in Durban last weekend, and a host of hungry QS competitors.

The QS1,000 women's event will get underway on Saturday morning, followed by the JQS1,000 junior men's and women's events.

The swell is expected to drop marginally from today's seven metres to around five metres on Friday. It is anticipated that the organizers will get Round Two underway soon after 8 a.m..

An outreach program will be conducted by Surfing South Africa (SSA) on Sunday, 25 June. Participants from local outreach organizations will be involved in beach activities, water coaching, a tag team contest and beach relays with all participants receiving breakfast, lunch and a commemorative medal.